I am writing this post as much for me as for you…….perhaps even moreso. Because this week has left me in a bit of a funk. Not just a regular Tim-funk. But a Soul Train-level funk. So I need to talk things out a bit. I know you’ll be patient with me.

For five solid years now, the central planners of the world have executed an unprecedented takeover of financial markets. The thing is, 99% of the people who follow such things are just delighted with their new masters. Why shouldn’t they be? Assets keep going up. And up. And then up some more. Who cares about economic philosophy when you end each day richer than the day before? 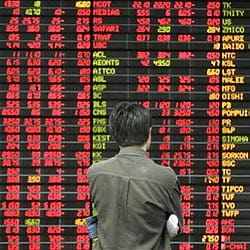 When the wounds from the financial crisis were still fresh, the markets were still vulnerable to sell-offs, and the investing public was respectful and attentive to the Cassandras of the world. Five years is a very, very long time, though, and things have changed radically. Markets don’t go down anymore. Look at the last year, from the November 16th bottom (I don’t even have to refer to a chart) to the present day. One solid year of up. There have been scandals, wrecks, and disasters all along the way, from ObamaCare to the Government Shutdown to everything else, and the equity markets haven’t given a flying crap. The market is, at long last, utterly conditioned to go up in the face of any risk event.

Since “down” charts seem to resonate with me more than “up” charts, I decided to look at an inverted chart of the Dow. And here it is: 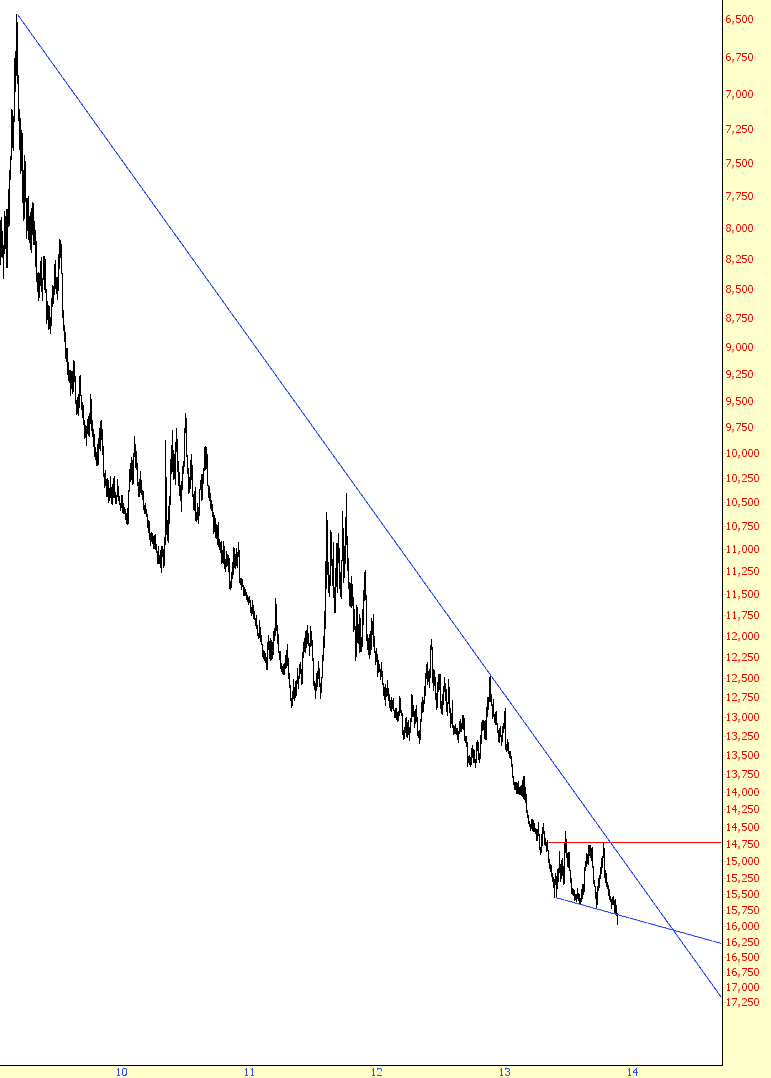 So, ignoring the y-axis values, let’s just pretend for a moment that for the past five years, we had been basking in a glorious bear market (my God, can you imagine?). And let’s further pretend that Slope was crammed with a bunch of depressed, battered bulls (ha!) that were agonizingly desperate to see the market finally turn in their favor.

Well, the graph above wouldn’t be the least bit encouraging. The broadening formation you see at the bottom, bounded by the red and blue lines, was shaping up nicely for a while, but as of this week, barf-o, it breached its attempt to finishing basing, failing to yet another low. Thus, the market looks weaker than ever.

Of course, let’s remember this is upside-down, so you need to reverse everything I just said. Although Slope does have its share of bulls in the comment section, they aren’t battered – – they are, on the contrary, smug, snarky, and increasingly abusive to anyone who doesn’t get aboard Air Yellen. I am sickened to even see people beginning to cheer on the albino troll. But, as the saying goes, it’s hard to argue with success. If I had a cabal in Washington pushing the market down for five years in a row, I’d probably be a raving asshole myself. 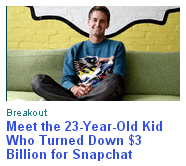 But the asset-mania isn’t confined to stocks, as I’ve mentioned recently. Twitter is “worth” $25 billion; the P/E of lame burrito maker Chipotle is approaching 60; the mainstream media is crammed with shills and former Doctor Dooms proclamiing that there will be another five years of this bull market. And, grossest of all, every stinking one of them utters “this is going to end badly one day”, just to make God-damned sure that when things do end badly, they can cut ‘n’ paste that archival clip to show to blinkered audiences in the future that they tried to “warn” them.

Let’s take another look at the market, this time by way of a monthly bar chart. 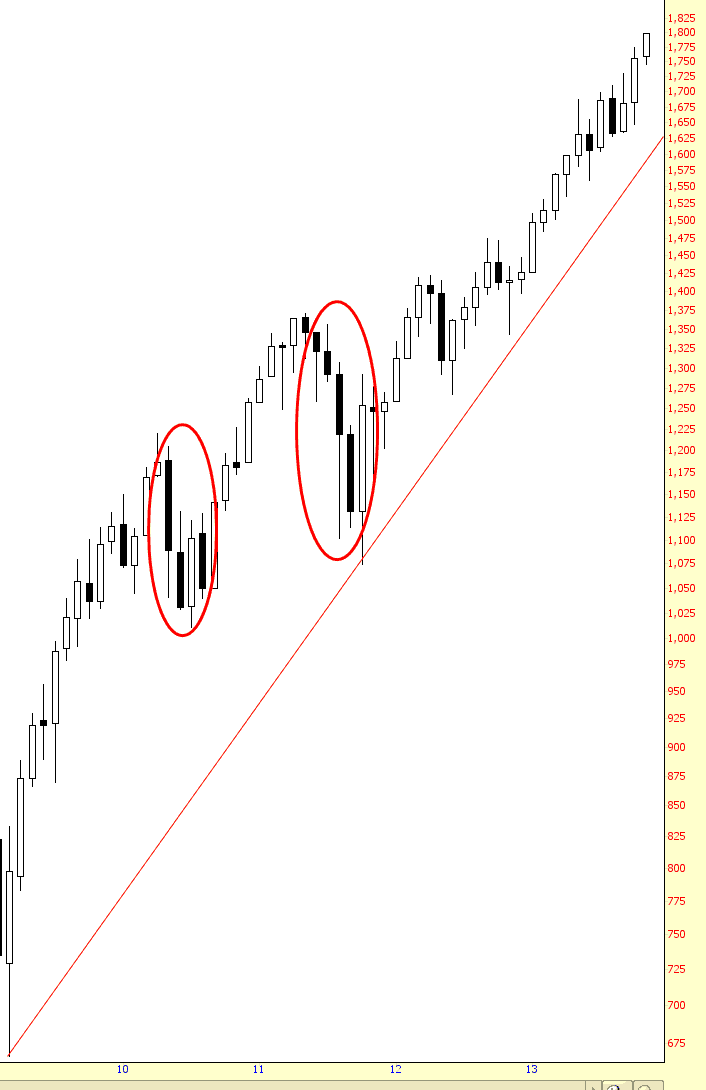 As you can see, following the financial crisis, the market did endure a couple of big “shudders”. There was one in 2010, and even bigger one in 2011, and then……nothing. The market’s trust of the central bankers to Take Care Of Things became so deep, there was no need for any more selloffs. The Fed’s ownership of the market was total. If you want to find even a pair of adjacent black candles on the chart, you have to go all the way back to the Spring of 2012.

During the most recent thirteen months, there have been two – two – black candles.

There are three tiny corners of the Internet that have behaved as bastions of bearishness. One is ZeroHedge which, to its credit, has shied away from the-top-is-in type writing and focuses more on can-you-believe-this-shit???? articles instead. In a just world, ZH would get a Pulitzer Prize. And I’m serious about that.

The second is the poor guys down in Gainesville, who have made being wrong a livelihood. The unfortunate thing is that their data and arguments are so damned seductive, they convince me every time that This Is It. And you want to know something? It’s never It.

The most recent Elliott Wave Theorist (11/15/2013) states on page 5, in what surely must be one of the greatest understatements ever written, “The stock market top has eluded us. Prices have repeatedly passed what we thought were terminal junctures.” They go on to say on page 10 “The stock market has been the only major financial sector holding up. It’s been frustrating, but it won’t last. When wave c in the Dow gets going, the rush to the exits across all markets will be both frightening and exhilirating.”

Well, yeah, I’m inclined to agree, but I’ve got to tell you, after five years of this shit, I’m feeling pretty

exhausted. There’s some irrational part of me that is convinced that I am personally holding up the bear market, because until I rip off my clothes and screech out on national television that I am giving up, and that this is the most awesome bull market in human history, the Market Gods are just going to keep things propped up. And, again, I’m being serious about this. I keep thinking this is somehow my fault, and that until I slice my proverbial wrists, the market is going to continue to torture me.

I still believe that “this will end badly some day”, but I’m having more and more doubt as to how far “some day” is. People keep giving assurances that it’ll be “next year”, but it’s always “next year.” See, the trouble is, what would need to happen in order to create a lasting inflection point in the market? The formula right now is retard-simple: (a) central banks create debt; (b) the debt floods the market and pushes equity assets higher; (c) the rich get richer, the poor get poorer, and nobody really cares. I ask again: since this is working so well, why would someone – particularly someone like Yellen – change anything?

Did you see her testimony this week? I was able to stomach a little of it, although listening to the 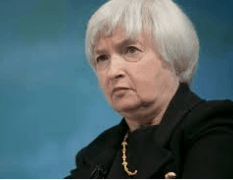 scratchy, granny-like voice of the old biddy made me feel like my spine was going to shatter. But one Senator in particular was asking her legitimately good questions, and she dodged them like a master politician. All she managed to say with respect to the bubble is that things didn’t appear “bubble-like” (as if any Fed official in history has ever made a good prediction or even had the balls to say anything remotely negative).

The only “thing” that could cause a change, I suppose, would be if interest rates made a serious breach of their downtrend and began accelerating upward. If interest rates are climbing, and the Fed can’t seem to stop it, well……..in my professional opinion, they are, at long last, completely hosed. But until that time, the astonishing, astronomically huge debts of the nations of the world have, perversely, become so gargantuan that people just don’t care about them anymore, and it all seems like a pile of free money for anyone willing to pluck it up.

I would have never guessed I would have survived five years of this crap. I’m actually kind of stunned that I’m still here. But I have lived a life of persistence and, unfortiunately, rationality. And rationality, let me assure you, can be the most vexing of enemies during times like these. Do you feel like a voice of reason in a world gone mad? Then I bet you’re feeling as lonely and out-of-place as I do.