This is a very important – and somewhat selfish – post. I need your help, and I'm hoping you'll come through. But I think we might all learn something together. I'm going to leave it up for a good long while so I can get as much feedback as possible.

In spite of a horrendously rough month, my faith in charting – – the kind of charting I've been doing for decades and which I discuss in my book – – is strong. My charts haven't done me any damage. My judgment of market direction definitely has.

Generally speaking, my decision-making process has been a three-step approach:

(1) Make a judgement on the market's general direction;

(3) Load up on either bullish or bearish charts, based upon the conclusion from step (1)

This method worked marvels in 2008/early 2009. Even though the middle of 2009, it continued to work well. Even during the last six months, there have been brief instances (Jan 19 to Feb 5) where it has worked, but there have also been times (Feb 5 to present) when it's been devastating. In a market like this, the above "top-down" method isn't working consistently enough to keep. So I need a new approach.

Part "(2)", I am totally happy with. I'm a good chartist, and I think I can pick out bullish and bearish charts with the best of them. So this area – which is where I've got twenty years of experience – can remain.

It's parts 1 and 3 that need to get thrown under the bus, and I have three new approaches that are candidates for its replacement. I will tell you right now I do not judge all three of these as equal; there's one I really like, and there's one I don't care for, but I am going to try my best to excise my feelings about any of these three since I'd like unvarnished opinions. Oftentimes the comments section drifts off into other realms, but I ask that, for this post, let's stay on topic. Your aunt's recipe for Zesty Banana Pudding will have to wait.

So here are my three candidates, along with a brief description of each and, off the top of my head, the advantages and disadvantages for each. I could write a lot more about each of these, but I think you'll get the gist of it.

Assumption: That the market's direction, being unknowable, should not be relied upon as a basis for positions, and that the bullish/bearish configuration of a portfolio should simply be dictated, in a Darwinian fashion, on which positions "survive", adjusting accordingly.

Description: The simplest execution would be something like this: in a portfolio, an even number of bullish and bearish positions are executed, each of which is similar in size. Let's say 20 of your best bullish charts, and 20 of your best bearish charts. Stops are set and are updated daily. If a given position is stopped out, the trader is allowed to enter a new position on the other side. (Example: two bearish positions are stopped out; therefore, two new bullish positions are entered, yielding a mix of 18 bearish and 22 bullish positions). The mix "see-saws" either bullish or bearish, depending on what happens on a chart-by-chart basis.

+ Having equally-sized positions is troublesome. After all, does one want to have the same sized bullish position on something like SPY as they do a bearish position on some micro-cap stock? It also severely "collars" the size of the portfolio, because the small position is going to restrict the overall size. For example, let's say the most I wanted to risk on a particular position was $20,000, and I'm planning on having 40 positions (20 bullish, 20 bearish). That means a total portfolio of $800,000. That isn't going to do it. I need to be able to size for a much larger portfolio than that, but at the same time, I don't want to risk, say, $200,000 on some speculative issue only because overall portfolio size requires it.

+ It seems a method like this would be dangerous in a very choppy market. If, for instance, things were up one week, down the next, over and over again, a strategy like this would chop one into little pieces. It seems to me this method is best for markets that trend for at least a couple of months at a time.

Assumption: The assumption here is that the market regularly moves above and below its moving average (for the sake of example, let's say its 50-day moving average) and, generally speaking, oscillates over time.

+ Would suffer greatly in a trending market. So, for instance, if an index was at an extreme relative to its moving average, and it stayed there for many weeks, being loaded up on bearish positions would be harmful. Of course, the moving average would be in a constant state of "catching up" with its index, so bearish positions would be trimmed, but a market that is steadily trending up or down for long periods of time may be very disagreeable with such a system.

Assumption: That, by and large, markets tend to go up, and while there is some room permitted for bearish positions, on the whole the assumption should be for asset inflation.

Description: The portfolio overall would have a weighting of 80% bullish positions and 20% bearish positions.

+ Simplest of the system

+ Over the long haul, this is the most in tune with broad market direction

+ Seems overly blind to market movement. If one remained 80% in bullish positions during 2007 and 2008, the bearish positions would have not be sufficient to fully counteract the damage going on.

I'm putting a poll below, so if you think any of these three is worthwhile, please vote for it. If you have a totally different approach that addresses this need for a "weighting system", please put it in the comments section. I am really looking forward to reading what people have to say. Thank you!

It was a week of strong, forward movement in all of the 164 DJ US Sectors except for one–Water–which was down 2.1%. Here are the broad sectors, all of which were solidly positive (to the understandable chagrin of the bears). 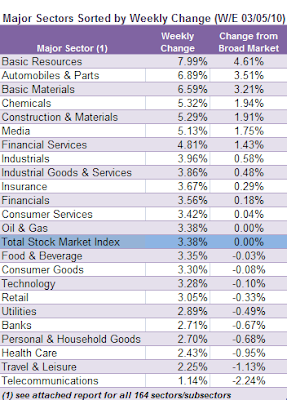 On the weekly charts, I'm seeing several sectors that are making new highs, but the ultimate oscillator is not confirming. It's a divergence worth keeping an eye on. You can find the full report here. I did not include the Monthly charts.  I will update those at the end of each month.