Contrary to their Northern brethren, Portugal, Italy, Ireland, Greece and Spain peaked in October 2009. What followed is now history, and it is widely claimed that Greek problems will be contained.

Below is a GDP-weighted composite index of stock markets of countries listed above. Combined, their GDP is 90% that of China (in nominal USD) – so this is no small fish. I present my favoured scenario in this daily chart. The declines so far have been impulsive; rallies corrective. Of further note is the fact that 55 and 85 day moving averages are falling, and the 55 day one is about to cross the 200 day one from above (bearish). 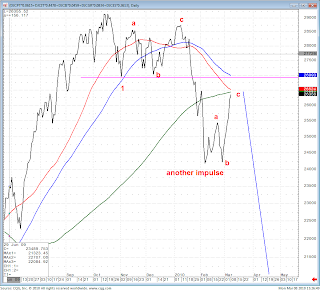 An alternative scenario for this funky group is presented below. While it is certainly possible that PI(I)GS will fly in what would be a massive "C" wave higher, I consider the outcome unlikely. This will change should we get closes above January 2010 levels, which would confirm the move since October 2009 as an ABC correction lower, pending further upside. 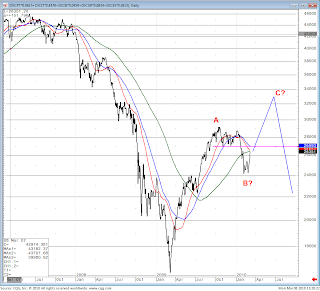 The longer-term pattern in EMC Corp. (NYSE: EMC) has huge upside potential for a thrust above multi-year resistance at 18.50, which should trigger conservative near-term targets of 20.60 and 21.50. Today’s upmove from 17.87 to 18.45 has the right look of the initiation phase of the thrust above resistance. However, my hourly work is very overbought, which suggests to me that for EMC to continue higher directly from here, it must be the subject of some sort of bullish catalyst. Otherwise, the overbought near-term condition should coincide with the advent of a pullback into the 18.20/00 area prior to the next loop to the upside.

Today my account went in the right direction for the first time in a long time. I hope I can produce many more such days this month. Sheesh, what a slog. It's been like a trial by fire.

Just to make my day even brighter, my three hens are all now laying eggs. After the close, I went out to let them out so they could run around the yard, and I discovered three eggs, all differently colored. Hurrah!

Homebuilders. Long position. And, yes. This is my serious face.