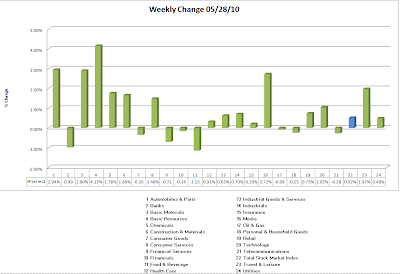 Last week was quite a rebound in the market with the broad market index advancing .52%.  There was a notable rebound in many of the sectors. Here are the top/bottom 10 industries for last week.  This information is available to non-subscribers at the WSJ Industry Page, which you can find here. 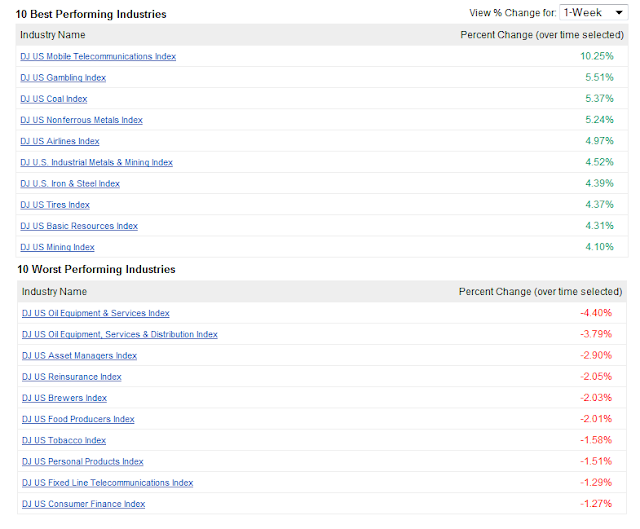 There is always a bull/bear market somewhere…just make sure that you are looking in the right places.
I've prepared for the the detail chart book which you can find here.  Because it is month end, I also included the monthly charts.  IN ADDITION, I created performance charts for all 24 Sectors! I think that you'll find them interesting because I started with March 1, 2009 through May 28.  I've also included bookmarks to make this report more navigable.
If you are not familiar with performance charts, they measure the price performance relative to a starting place. Here's an example of a performance chart for the Total Stock Market Index from 03/01/09 through 05/31/10: 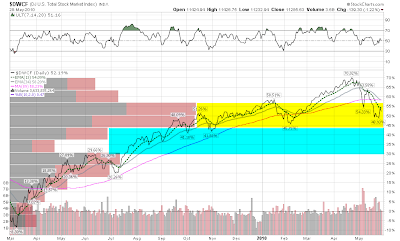 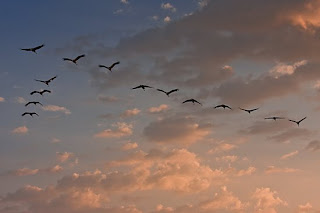 It seems to me sometimes, that the soldiers who
From bloody fields did not return
Long ago, fell not to the earth,
But had transformed into white cranes.

Since ages past, they still fly overhead
And lend to us their voices.
Is that not why, so often and so sadly,
We fall silent, gazing at the sky?

Flying, flying in a tired V
Flying through the mist as the day descends;
And in that formation I see a small space—
Perhaps that place is meant for me!

The day will come when, with a flock of cranes,
I will swim through the same gray fog
And from the sky, in bird-language, call
To all of you who I left behind on earth.

Some folks believe that the market reacts to news within milliseconds. Let's take a look at the daily price chart of British Petroleum (BP) to test this theory. I've put an arrow marking the day the fatal explosion occurred:

Over the course of over a month, yes, BP has lost about a third of its value. But instead of taking milliseconds to react, almost an entire trading week transpired before there was any meaningful reaction. The same can be said of TransOcean (RIG) which has suffered even more greatly.

I have been following with great "interest" (heh. heh-heh.) the developing legislation to tax so-called carried interest at a higher tax rate. There's a good article on the passage of this bill in the house on Friday.

Let me start by saying that the political swing from the left to the right, which began in 2007, will go on for another 10-15 years. There are many changes we'll see, but there are a couple of changes you can, as my mama used to say, put in the Bible – – (1) higher and higher taxes for everything under the sun as governments stave off death by starvation; (2) an increasingly anti-rich, anti-business, pro-union environment. Bank on it.

The idea that the richest of the rich get a special Rich Man's Tax Rate of 15% is plutocracy at its worst. Let us once again consider the utterly ignorant average American. Let's stop him in the street for a moment.

SOH: "Excuse me, sir, may I ask you a couple of questions?"

SOH: "Do you know what a hedge fund manager is?"

MOTS: "I guess so. They manage money for rich people."

SOH: "Yes, that's right. Do you know how much the most successful hedge fund managers made last year, during the Great Recession?"

SOH: "Oh, lots more. The top five all made way more than a billion dollars for themselves, just in that one year, each. The top guy made $4 billion personally in 2009 alone. Amazing, huh?"

SOH: "Of course, these guys have to pay taxes. And you know what? Because of what they do, they have to pay a special tax rate!"

MOTS: "That's good. The country could really use the money. I'm just a regular working guy, and I pay almost 40%. These guys must really have an incredible rate."

I do believe that those, for instance, in the world of venture capital are entitled to special capital gains treatment, but it sounds like the very broad brush of higher taxation is going to paint both deserving and undeserving alike.

But all the bleating I'm hearing from the world of private investment about how this will kill jobs is complete rubbish. People who run hedge funds don't create jobs, except for a handful of administrative positions. They run money. Period. They're professional gamblers, and those that are good at it are richly rewarded. There's no reason under the sun that the income they draw from their efforts should be taxed any more beneficially than the income other people draw from their efforts. It's the same damned thing.

Let's hope the Senate doesn't succumb to the pressures of the treacly lobbyists from private equity-land and water things down any more than they are already. Hedge fund managers avoided billions upon billions of dollars of taxes they should have paid during the past decade. If there were any justice, they actually would have a special 70% tax for the next ten years, but let's at least pretend to be a little fair and have them join the rest of the working world. God knows Big Jim Simons can spare the cash.

First, we express our gratitude to all the heroes that made unimaginable sacrifices for us and our country, and to defenders of liberty and freedom.

Now, those who follow our blog know that we do not like to make forecasts
on the future price direction of the instruments we trade.  Huh?  How
can any trader generate revenue without forecasting price direction?

To clarify, obviously, we do make forecasts each day when we trade.
But, we don't remain stuck on a long term view.  In other words, we truly
confess we have no idea what /ES will do in the next 30 days.  We are
quite content observing Tim and others make their startlingly bold and
accurate predictions!

However, what we do know is that /ES follows supply and demand
areas.  When /ES breaks through a level, and then retests to prove it's
legit, the odds are good it will migrate to the next support or
resistance level.  Then, we try to trade a bounce that can turn into something bigger.  To that end, we find volume profile analysis useful
in our trades.

Here's our latest snapshot.  If you were /ES, what would you do?

We see two possibilities, 50/50 odds from our perspective, but a nice
move either way.  The best part is that /ES will tell us what it wants
to do through its price behavior on smaller, intraday chart timeframes.

On Friday, the relentless bulls took /ES right to a 50% retracement
at 1105s, just below the prior resistance at the 1110 level.

If /ES can break above 1110s, we see the next potential resistance
level up at 1150s, a nice 40 point move.  Mind you, if it breaks 1110s,
it's not an automatic entry for us – we'll probably wait for a
retracement, watch /ES starting trending North, and then buy a pullback.

On the other hand, if /ES can break below prior support at 1075s,
then it's possible we can see a Southbound run all the way to targets
down at 1004s/1005s.  Again, we would wait for a pullback after breaking
below 1075s and then sell if /ES starts to develop Southerly
tendencies.

Of course, it's Summer and always possible that /ES will just remain
stuck right here between 1060s and 1110s.  Therefore, proper risk
management and scaling out techniques that book partial profits are
essential.