While I realize most traders are looking for the broad market to rise over the next two weeks into the July 4th holiday due to end of the month and end of the quarter mark-up, I'm still on the hunt for possible short set-ups in case the up move doesn't materialize.

What I'm looking for are stocks that fund managers might dump to make their books appear fluffier. Since GDP numbers missed expectation it might be possible to find stocks tied to the consumer or economic expansion that fund managers spuriously ran up off the March '09 lows and look ripe for profit taking (see Family Dollar below).

And I always keep an eye out for stocks that suffer from a down side event (such as a downgrade or missed earnings) … which is what my first potential short, Edwards Lifesciences (EW), looks like:

This appears to me to be a classic Alan Farley "Hole in the wall" swing trade. The event that triggered the initial sell off was a Goldman downgrade and after two days of catching its breath, it may be ready to continue down.

The swing trade is to get in under the most recent low with a stop in place in case you trigger in, but dip buyers push it back up. In this example I used the value of a single 10-period ATR as a stop, but any stop that fits your style is applicable. The plan is to roll the stop down daily until stopped out or you hit a profit target (if desired).

Family Dollar Stores (FDO) has had a nice run up, but may be ready for a retest of its previous lows as bulls look to lock in end of the month/quarter profits. For this trade I'm using Dr. Alexander Elder's "Impulse System" via Stockcharts.com. In his classic book "Come Into My Trading Room", Dr. Elder writes that his Impulse System is not a mechanical system and it's best not to automatically trade red or green bars without some other pattern or trend confirmation.

In other words, try to trade good looking charts in the desired direction.

A sell signal occurs when the long-term trend is deemed bearish and the
Elder Impulse System turns bearish on the intermediate term trend. For
example, the weekly chart shows a clear downtrend and this means only
sell signals are heeded on the daily chart. Buy signals are ignored.
Elder suggests exiting when one of the two indicators turns up, either
the 13-day EMA or the MACD-Histogram. – Elder Impulse System, Stockcharts.com

Which means we cover if a blue bar prints. Blue painted bars represent system indecision and as such, it's time to exit. As an added bit to Elder's original rules, my own recent testing of this system shows the best profits occur in a three to five day window (with an exit at the end of the fifth day).

Depending out how the futures look Monday morning, I will be entering a short on (FDO) and monitoring (EW) for a possible entry. If the futures are screaming higher, then the trades goes on the watch list for the week. 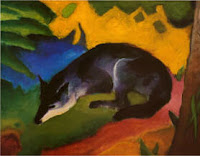 I have something wondrous to share with you:  Weekly Sector Charts with a twist!  I was up early this morning, and I had a thought noodling in my head. I was interested in what the short interest was for the various subsectors. I decided that I wanted to create (for you and me!) a sorted list on that.
For that I went to FINVIZ.

I calculated the number of short shares (% of float short x float).  I then multiplied that by the share price to come up with the market value of the float that was short.  The table that I prepared had % of market cap short and % of shares short.  I've a new/fast computer, and this process taxed the resources.  I've included the report within my sector report.  I hope that you will download the full report. You will not be sorry, and I guarantee that you will see some things that will surprise you!  It is in PDF, and it is very easy to read.  You can find it here.

Let's take a look at the Weekly Sector Graph. You do not have to adjust your screen.  The 24 sectors are all negative.  Only 5 of the subsectors were positive.  The broad market index was down 3.7%.  As usual, individual sector mileage varied, which is why I put these together. 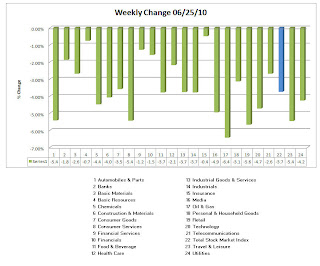 Now let's drill down and look at the subsector 10 best/worst performers. 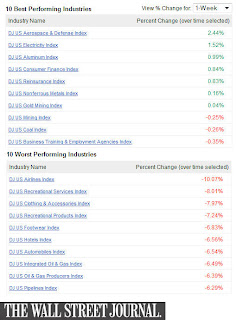 A hearty good morning to you from beautiful Fallen Leaf Lake in the Sierra mountains of California. I'm watching my back, since I read that Gary Savage is rock climbing in this mountain range, and my fears of being a squashed grape must not be realized. I've got a lot of work to do before this is all over.

I come up here this time each year with my family for Stanford Sierra Camp, which is largely for the kids, but it's great for the parents as well. I'm presently waiting for the singing group to get together, in which I participate every year.

My big worry this week isn't the G-20 or the Euro or precious metals but is instead Wi-Fi. Our cabin is currently out of range of Wi-Fi, even though it's supposed to work. I'm pretty good at begging, so I'm seeing if they can get things running today. I made it very clear to them that, given the choice between running water and wi-fi, I'd be much happier without the running water. We shall see. Otherwise, I'm going to spend a lot of time in this lodge.

Anyway, I don't have anything market-ish to report; I just wanted to check in with you guys and say hello. Leisa's in charge, so behave yourselves. I'll try to do the same.

(Leisa here:  I wanted to privileged Tim's posting, and I'll continue to do so during the week. I'll put my sector report up after this.  Thank you contributors for your offerings.  I see that the backlog is building! For those who want a head start on the sector report, it is posted on my blog which you can find here.)