I know the fastest way to get yelled at is to dare whisper that precious metals will one day actually go down in price. Because – I know, I know – Bernanke, QE2 through QE9, fiat money, and – may God have mercy on us – Old Turkey.

But my Parisian friend Serge sent this fascinating analog between the SPX early this year and the current GLD. It's beautifully rendered and worth a look:

There were a couple of very interesting support trendline breaks last night, followed by swift recoveries.

The first break was on EURUSD, where the support trendline since 1.27 was broken and then recovered. Since then EURUSD has returned to retest the recent high just over 1.38. If 1.38 holds then I'm expecting to see some more downside on this. If it doesn't hold then my next upside target is slightly over 1.39:

GBPUSD hasn't broken support, but is also retesting the recent high. If it makes a new high then my next upside target is in the 1.605 area: 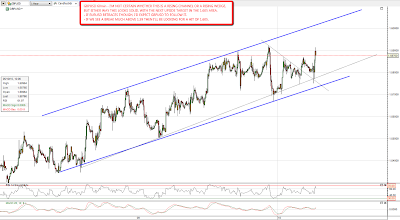 ES broke the recent rising support trendline after EURUSD and recovered less swiftly to the recent declining resistance trendline marked in red. That has held so far: 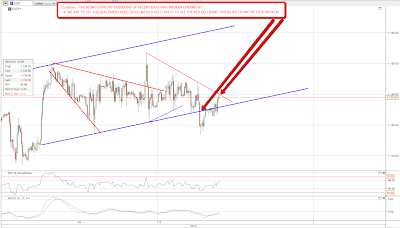 There is a good chance of seeing a two or three day retracement from here, and I'm watching that resistance trendline on ES and the high retest on EURUSD to see whether that's likely to happen. If those resistance levels hold then I think we will see that retracement. If they fail then we should see a couple of bullish days instead.

I was surprised to see yesterday that 2 year treasuries had made a new high. I tend to watch the longer term treasuries mainly where they're still some distance from the recent highs. Looking at the 2 year treasuries daily chart we're now close to the panic spike high in November 2008:

I had already noticed on the ten year and thirty year treasuries charts that both are still within rising channels from March this year. I'm wondering about that, as if the bullish scenario for equities is correct, then the treasuries rally should be over. They trended sideways to down during QE1, and there's no reason to think that QE2 would be any different.

Of course whether there will be much to QE2 is open to question. With equities already having risen hard in anticipation of a big new round of quantitative easing, much of the rationale for QE2 has already faded with that equities rally.  If the treasuries rally is over, then the rising channels will break soon, but until then that bond rally could still be alive and well, with two year treasuries leading the way up. Here's the rising channel on the 30 year treasuries daily chart: