I hope that all of you find the following information useful in your trading endeavors. I will be back later with my daily market commentary.

Even after today’s failed rally (considering the highs of the day), there are still a few ETFs that I am watching for a potential trade.

The QQQQ is an obvious one that I have added to my short-term watchlist. The tech-heavy index is on the border of being “very overbought” and has a decent RSI (2) rating above 93. I would prefer to see a higher number (greater than 95), but given how heavy the market currently feels I will be watching this one closely tomorrow.

The other is the Real Estate sector (IYR) as it has pushed into a “very overbought” state. The RSI (2) is not as high as I would like, but I will be watching this one closely nonetheless for a quick decline.

I work hard to bring you my latest views, opinions and research on a daily basis. If you are a loyal reader and find my thoughts useful please show your support by joining my newsletter service.

Watch and learn firsthand how I implement my options strategies.

There seems to be a common attitude among surviving bears (which appears, in total, to be me and a grubby fellow named Shotgun that hasn't bathed in a while) that Once The Election Is Past, The Fall Will Come. This is more of that "psychology of tomorrow" stuff I alluded to in my recent video.

I don't understand what difference the election will make. People seem to have an image in their minds of Shalom pressing down hard on a Push Markets Up button, and once next Tuesday is done, Obama will say, "Shew! Glad that's over with! Hey, Ben, you can take your finger off the button now!" Why would he? Why? Tell me that.

Now that the government has found the secret sauce to push assets higher, they're going to keep doing so until disaster strikes. It could be years before that happens. I think the election, QE2, and everything else will pass, and things are just going to keep going the same as they've been going for the past 19 months.

In case you haven't divined it, my frustration with the markets is at an all-time peak, so fade this attitude if you choose.

Two ways I try to improve as an investor are reviewing past investing decisions and reviewing constructive criticism. I’ll be doing some of both below.

Back in January, I placed an Altman Z”-Score pairs trade, shorting Trico Marine Services (TRMA) and buying an equivalent amount of Oceaneering International (OII). I had found TRMA on Short Screen’s screener, where it was listed at the time as one of the 25 most financially distressed companies among those with a share price above $5.

As we noted in a recent Seeking Alpha article, Short Screen uses the Altman Z”-Score to rank the non-manufacturing stocks in its database, and the original Altman Z-Score to rank the manufacturing stocks; then Short Screen combines the results into one list, ranking stocks according to their distance from their respective distress thresholds. That article stated the original Altman Z-Score Model:

Scores below 1.81 indicate risk of bankruptcy within the next two years; scores from 1.81 to 2.99 are a gray area; and scores of 3 or higher indicate an absence of financial distress.

Scores below 1.1 indicate risk of bankruptcy within the next two years; scores from 1.1 to 2.6 are a gray area; and scores greater than 2.6 indicate an absence of financial distress.

On Short Screen’s screener back in January, TRMA showed a distance from distress of -1.23, consistent with its Altman Z”-Score at the time of -0.13. Looking for stronger companies in its industry (offshore oil field services), I found Oceaneering International (OII), which had an impressive Altman Z”-Score of 9. I shorted TRMA at $5.31 per share and bought an equivalent amount of OII at $64.70. I set 9.5% trailing stops on both sides. A couple of weeks later, I was stopped out of OII for a loss of 9.5%. TRMA was down 16% at the time, and I decided to cover it there, closing out the trade for a modest 6.5% gain.

A couple of days ago, I looked at a blog post of mine where I had embedded a chart of TRMA versus OII. I noticed that the chart for TRMA stopped abruptly in September:

The chart ended abruptly in September because the stock symbol for Trico Marine Services is no longer TRMA, but TRAMQ.PK, the “Q” indicating that the company is in bankruptcy. This chart uses the new symbol:

In hindsight, I made two mistakes there. The first was in using stops. The reason I did was that I knew expert short sellers such as Tim Knight and William O’Neil tended to use tight stops. But as short sellers, those investors are driven mainly by technical analysis. I do take basic technical analysis into account when I invest, but the Altman models are primarily based on fundamentals (save for the numerator in the fourth term of both models, market value of equity).

Dr. Paul Price noted that and offered this constructive criticism: since I was shorting companies based primarily on their fundamentals, and since fundamental factors can take several months or to play out, it didn’t make sense to get stopped out of a position based on short-term share price fluctuations. Seeing the gains I left on the table by closing out this Altman Z”-Score pairs trade too soon underlines Paul’s point. Going forward, I won’t be using mechanical stops on these trades.

There's been some talk of how much the current wave up resembles the wave up between February and April and they do look similar. Here's a chart of how I'm seeing SPX on the 60min chart: 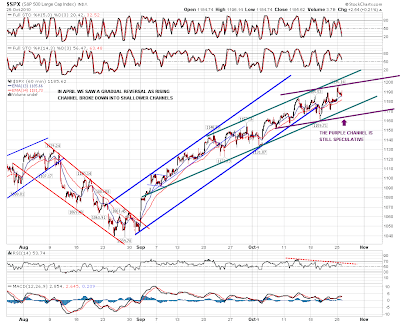 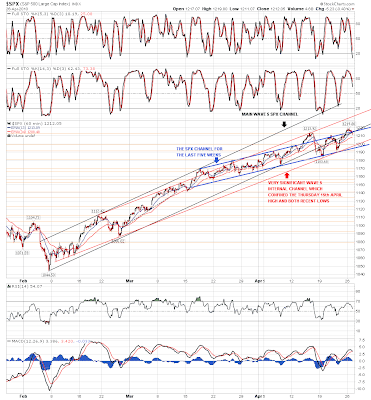 We might still make new highs from here, but this wave up is weakening, and if USD continues to bounce, I'm expecting it to break down in the next few days. For today I have a couple of downside targets on ES if we see more early weakness and they are 1178 for an alternate rising channel and 1167 to complete the head on a possible H&S pattern:

I was watching EURUSD yesterday to see whether the current rising channel would break down and it broke down overnight. I have a large declining channel on EURUSD and if it holds then I'd expect to see a fall to just over 1.36 next:

I have a similar but even shallower declining channel established on AUDUSD since the momentary touch of parity with USD a few days ago. I'm seeing the next target in the 96.4 area: