These coal stocks seem to be firming up nicely.  A very cold winter is expected across the Northern Hemisphere this winter, and as the dollar continues to weaken, you may want to ask Santa for two lumps.

ES bounced off the possible H&S neckline yesterday and bounced to make the right shoulder for that pattern. If that's going to continue to form then I'd expect ES resistance in the 1186-8 area to hold today:

It could still go the other way of course. The current (green) rising channel on the SPX 60min chart held yesterday with a pinocchio down through to touch the H&S neckline. If we reach the neckline again that should break that rising channel. While that channel holds though the next rising channel upside target is in the 1210 SPX area: 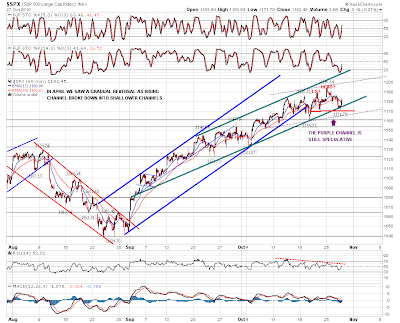 If we did see a break up through 1200 SPX, that would be a very major resistance break. The 200 weekly SMA for SPX is sitting at 1194.20. That trendline was the resistance at which the SPX failed in April and from a technical perspective a break up through it would be the cherry on top of the already impressive bullish technical case that we are seeing at the moment. Here it is on a thought-provoking log chart of the SPX since 1980: 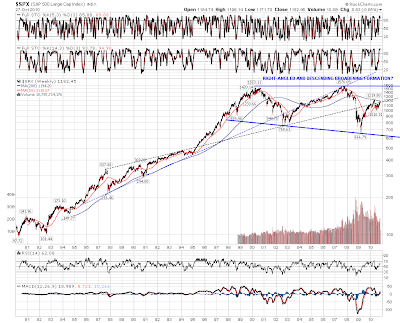 We haven't yet reached my EURUSD declining channel target at 1.36. Within that declining channel we have a short term support trendline which I'm thinking may be the lower trendline of a short term declining channel. If so, then we have reached the top of that channel at 1.386 overnight and it is currently being tested. I'm expecting that to hold, and it will be worrying for the short term bear case if it doesn't, though I do have an alternate declining trendline at 1.393 that would be the obvious resistance level if 1.386 doesn't hold:

We have a sloping H&S forming on gold which I'm watching with interest. The neckline's currently in the 1310 area and the target would be in the 1240 area: