Google is a chart that I almost never touch on either the long or the short side. However, the risk/reward is compelling enough at this point that I have entered a largish (for an individual equity position) short position on GOOG.

We are more than ten days past the huge gap up, which in 2008 was an ideal time to short the stock. My stop on this is, not surprisingly, just above that horizontal line you see, which is just a couple of percentage points away.

Rare earth's are all the rage these days, thanks to China.  Everywhere you read, you hear China is going to corner the market and bring Western Civilization to its knees.  Although it is pretty shortsighted allowing China to control 97% of the production, all is not what it appears.  First some facts:

The rare earth marketplace is $2 billion per year. 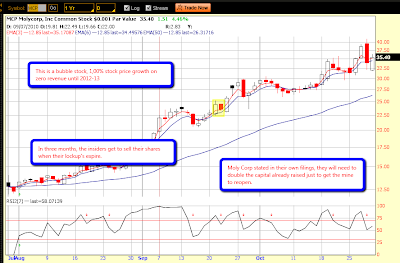 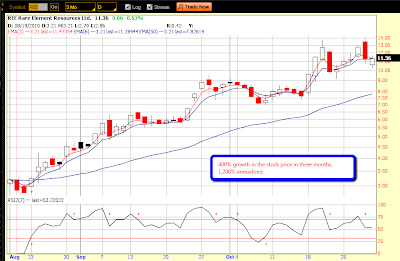 Based on the above facts, this is a bubble, market caps exceed the entire industry annual production by 5x. These mines will not have any pricing power once they are up and running. Remember, China can control the price of these metals downward, as well as upwards.

I sold my position in REE last week and have no intention of buying Molycorp, until they have completed their dilutive follow-on offerings and the insider lock up periods end.  I will evaluate them, then.

This is a rollercoaster I do not wish to ride.

Well there was a very nice bearish setup building in the second half of last week, but it needed to break downwards on Friday really, and it didn't. Further damage has been done over the weekend and little or nothing remains of that setup this morning.On the ES 15min chart the H&S pattern obviously never completed, and I see a triangle that has broken up indicating to the recent high. I also have a possible rising channel that could take us well over 1200: 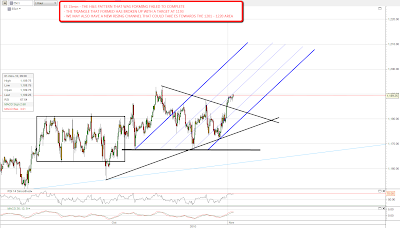 There is still major resistance at the level of the recent high, but the overall technical picture is so bullish that we may not see a retracement there. If breached there is an argument that the SPX IHS may play out to the 1244 target before we see that retracement. One of the key things that I've been watching that suggested that we would see a retracement earlier is USD, where we've seen a significant bounce off rising support. That too is in trouble, though we haven't seen a new low yet. Overnight however EURUSD has returned to touch the top of the current declining channel, and there is a very significant chance it may break. If it does then the USD bounce is most likely over:

GBPUSD is a lot less important than EURUSD in terms of USD direction but on GBPUSD we have seen a new rising channel form, and that has topped overnight at the most likely upper channel trendline. We may see a retracement on GBPUSD now, but a fresh rising channel has now been established, which is a serious concern for any USD bounce:

JPYUSD is already making fresh lows and seems is in a declining channel with Yen making fresh highs. Yen has been very strong in recent months and JPYUSD is now close to challenging the all time low set in 1995:

Copper has been divergently weak in recent days and has not yet recovered. I was very interested to see that last week's low was a bounce off the upper trendline of the rising wedge that broke up at the beginning of October: 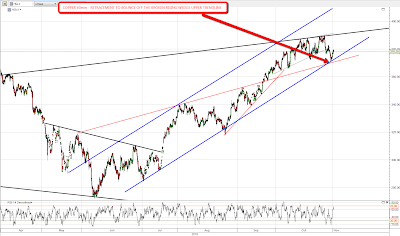 Overall the immediate picture here looks weakly bullish to me and we no longer have a pattern setup to suggest that an interim top has already been made. If EURUSD breaks up from the declining channel the picture will look much more bullish and I'd then be expecting a break up with confidence through 1200 on SPX. For the equities short side it was also discouraging to see that silver futures made a new high over the weekend, breaking the recent downtrend and boosting the gold/silver ratio, which is also bullish.