Just two days ago, I suggested ESI as a short based on its gap fill. So far, so good:

Traders have been waiting for weeks for the Big Election as a pivotal point in the markets.

If by chance a mystical genie had told you two days ago that the Republicans would recapture control of the House in the biggest turnover since 1948, you'd probably have spent every penny buying index calls on this amazingly bullish news.

So much for the fireworks. It would be doubly amusing if QE2 produced little more than a bean fart, once the day is through.

Looking at Bloomberg this morning I see that the Republicans have convincingly won Congress and reduced the Democratic majority in the Senate by at least six seats. That might well be a good thing, even from a Democrat perspective, as the last Democrat President Clinton also had a lacklustre first two years and only really came into his own as President after the Republican landslide in 1994. What it means in practical terms though in the next two years from a market perspective, is that the main and possibly only tool for the US government to 'fine tune' economic policy is likely to be quantitative easing by the Fed. We should expect a lot more of it as Obama seeks to pump up the US economy in preparation for his re-election run in 2012.

SPX has been bumping up against a key resistance level in the last few days, and that has been the 200sma on the SPX weekly chart. That was the trendline that marked the peak in April this year and it is at 1194 now, slightly below the SPX close last night. A cross of this trendline with confidence will place the last cherry on top of the already bullish larger technical picture here, and a break of this level with confidence now should eliminate the possibility that we will retest the IHS neckline at 1130 before playing out to the target at 1244: 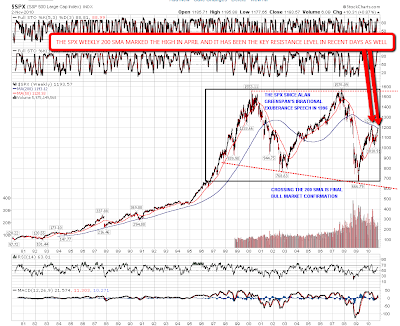 During trading hours yesterday SPX bumped up against resistance, but didn't break it, and the rectangle was intact at the close: 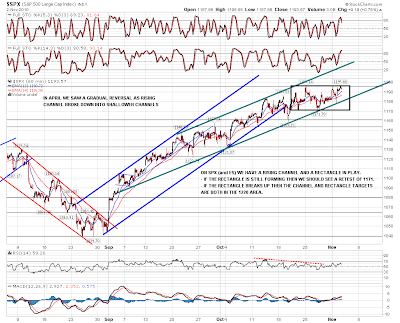 After hours though ES broke up over 1193 and rose as high as 1196.5 before chopping sideways between 1191 and 1194.5 overnight. It isn't confirmed until the rectangle is broken during trading hours, but I'm inclined to treat the rectangle as broken, and I'm expecting further upside later this week with the next real resistance at the April high:

EURUSD broke up from the declining channel shortly after I published my post yesterday. I'm expecting a retest of the broken channel trendline within the current rising channel before the next move up to challenge the October high. If that then breaks, and USD breaks triangle support, then the prospects for USD look very bleak over the next few months, and though we could see support at the last two big lows over 70, my next declining support trendline is in the mid-60s:

I'm expecting a big move on SPX soon, at the end of this week or the start of next week, and I'm expecting that move to be against the trend of the rest of this week. That trend looks as though it will be up over the next three trading days, and so we could rise to a significant high over the rest of the week, perhaps near the SPX April high at 1220. If we see weakness at the start of the session today I have channel support for ES in the 1178-1180 area, and that would look like a very good long entry if we reach it. If we should reach the upper trendline of the ES rising channel on Friday, resistance will be in the 1211 to 1213 area then.