Anyone trying to short Chipotle Mexican Grill has had their cajones handed to them during the past couple of years. I would like to respectfully point out that the price is nearing its 161.8% level on the Fibonaccis. Just so ya know.

I love channels. They give structure to a trend. They deliver good entry and exit levels. They're dependable, though to be used with caution like any other technical analysis tool. The current SPX rising channel is of long enough duration, and steep enough, that it should contain the current wave up until we get confirmation that the wave has finished through the channel breaking down. I was therefore not at all happy to see that SPX closed slightly above the SPX rising channel yesterday: 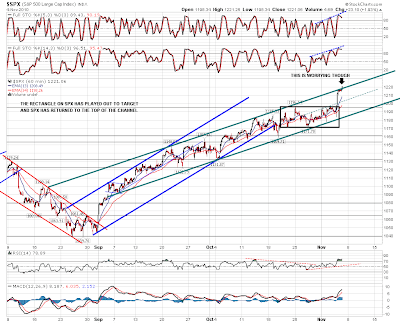 If SPX had closed at the top of the channel rather than slightly above it I would very confidently be calling for a retracement today. As it is I think a retracement is still likely, but the odds of a further upside breakout have increased considerably. The rectangle target at 1220 SPX was made yesterday, so that at least is no longer in play.

My short term ES channel broke up yesterday and I've had a hard look at ES to determine the current structure there. We have an almost identical channel to the SPX channel on ES, and that channel has not broken up, with an exact touch at yesterday's high: 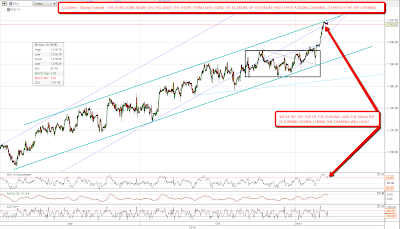 My slightly more cautious call for a retracement today therefore gives the following levels on ES:

Longer term what was left of the technical bear case received another severe battering yesterday and to my eye there isn't much left. The SPX 200 SMA on the weekly chart was broken convincingly, which was powerful bull market confirmation, and one of the last hopes of the bears, that financials would drag the market down, was also largely demolished in a single dramatic daily candlestick yesterday. XLF managed to break both the declining channel from April and the rectangle in a single day yesterday, and the rectangle target is now 16.9, which looks undemanding given that is still below the April high: 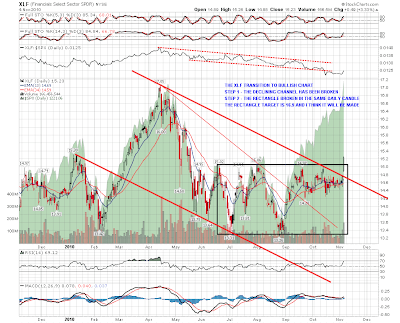 USD has now finally broken triangle support, though there has not yet been a break on a weekly basis. We'll see if we get that today. I have a decent quality declining trendline on the daily chart that I posted yesterday but looking at the weekly chart, my next declining support trendline would be hit in the 60 area, which is (cough) something to think about: 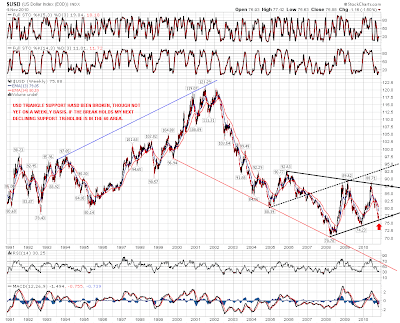 The bears are complaining that this bull market is an artificial construct based on a huge and unsustainable wave of government borrowing. I agree completely, but I think that's missing the point. All bull markets in recent years have been wild moves up based on fantasy and fraud, and this current bull market is built on even finer sand than the last two. My long term view is that we're in a steep reversion to the mean declining channel from the first bubble in 1995 – 2000, and that this current bull market is simply a return to the top of that declining channel. Here's the long term chart of the SPX adjusted for CPI and you'll see what I mean: 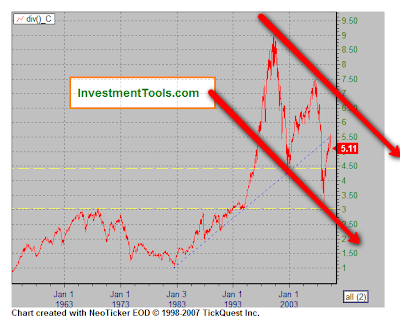 Looking at that real terms SPX chart I'm getting an upside target for the current bull market in the 1450 area, and I think we're going to make it to that target. We won't make it there in a straight line, and after we reach it I'm expecting the current bull market to end with a bond crisis to end the current wave of government borrowing, and an equities bear market that will be consequently uninterrupted by keynesian interventions. Until that time we should just buckle up and enjoy the ride.

I did a post in August going through this scenario in some detail. The short term gartley pattern leg down I was looking at then didn't play out, but the rest of my projection for this bull market is still valid and you can see that here.