In case you haven't noticed already, there are some really spiffy new features in the comments section. Let's take a quick look:

First, in order to make it abundantly clear that there are all kinds of goodies lurking underneath, this subtle reminder appears when you mouse over a person's profile area:

Click it, and that yields this dialog box. The two new buttons here – Highlight and Ignore – let you do something to other Slopers. Any guess what that is? That's right! You can highlight and ignore them.

You can also now add trading ideas. It's very simple for now – you can just enter stock symbols (not options, futures, credit default swaps, or iron condor spreads, for that matter). Just choose whether you are Buying or Shorting and enter the symbol – the system will track how you do over time. Of course, you can close any position later when you decide it's time to take a "profit" or stop the bleeding.

I hope you enjoy these new goodies; Slope is always in a state of getting better.

Apple's home page was breathlessly awaiting some huge, life-changing announcement that was even reported on Page One of this morning's New York Times:

So……….does Apple have a cure for cancer? Have they put the first human on Mars? Have they brought lasting peace to the Middle East?

No; the agreed-upon rumor is that they're going to let people download Beatles songs.

Anyone who likes the Beatles at all – and, I assure you, I'm a huge fan – already has the CDs and has put the music into iTunes. I've been listening to the Beatles on iTunes for years.

Here's a fun Tim Trivia tidbit: my first real job was at Apple as its Music Marketing Manager (seriously!), and the first thing I was told was about the legal problems with the "other" Apple. Apple Corps, which is the holding company for the Beatles, had a long-running suit against Apple Computer. Now, over two decades later, the Beatles are finally going to let people buy songs online.

You don't know how lucky you are, boy.

There's not much to say on equities today. Obviously SPX is still in a declining channel, and the next downside target is in the 1184 – 1186 area, depending when we hit it today. There is obviously a chance that won't be hit, but support at 1195 SPX broke overnight, and I think a downside trendline hit is now more than likely. After that hit the upside target will be in the 1200 – 1202 SPX area, and a break up from the declining channel will signal that this retracement may well be over, though if this has just been the A wave of an ABC retracement, then there may be more downside coming after a bounce. Here it is on the SPX 15min chart: 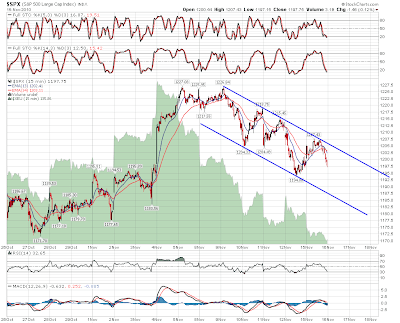 The declining channel on the Nasdaq isn't as pretty, but looks just as playable, and the downside target is slightly under 2100 today: 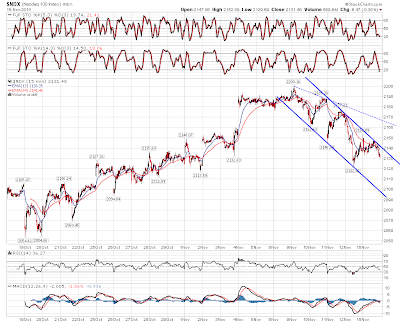 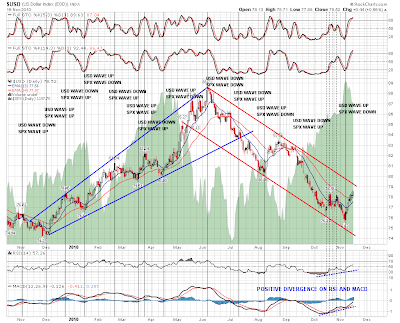 One thing that has been comical to watch over the last three years has been the flight to safety trade, where whenever equities have fallen, we have seen a flight to areas of perceived relative safety notably, and amusingly, to US treasuries and the Yen. That's amusing, as a flight to safety, because it has seemed increasingly unlikely over this period that the US will ever be able to repay its debts, and Japan, several years ahead in this respect, is already insolvent on any reasonable basis, with a debt in terms of GDP per head that is 50% higher than in Greece.

For whatever reason, and we should definitely consider the possibility that it is because there is now no perceived risk of a major decline in equities in the near future, the flight to safety trade has collapsed on this current equities retracement. Yen is retracing from close to an all time high. On the USDJPY chart that is reversed of course, so that's playing out as a bounce from support with the obvious target being 86 to finish the head on an IHS. Here it is on a 17 year weekly chart: 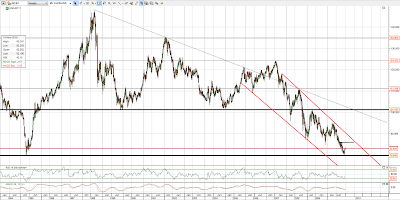 On US treasuries the start of QE2 is having a similar effect to the one we saw at the start of QE1, with a major fall in bonds and spike in long term US interest rates. So far these have spiked from 3.5% in the summer to almost 4.4%. The obvious long term resistance trendline is at 4.7% and they may well reverse there, though there is a very real possibility that the thirty year bull market in bonds ended in late 2008, and that interest rates will break resistance and go much higher. Here's the 20 year monthly $TYX chart for 30 year T-Bond Yields to show what I mean: 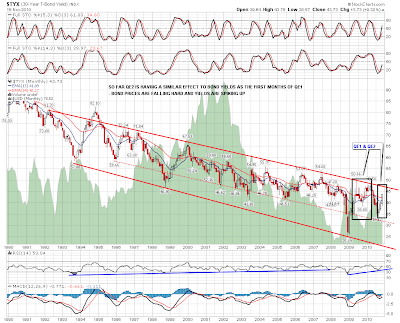 The bond chart is possibly the most important longer term chart to watch nowadays, as for all its impressive power to print money, unless the Fed is happy to mop up all demand for treasuries just by printing money, it still needs to maintain confidence in bondholders that they will get their money back. That is complicated by the fact that many US treasuries are held overseas and that the Fed must keep yields and thereby interest rates low in order to protect the US economy from an interest rate shock. If $5 trillion of US treasuries is held by foreigners, and that appears to be about right, then a 10% devaluation in USD is effectively a $500bn windfall tax on foreigners holding US treasuries that yield a small fraction of that. Small wonder that enthusiasm for USD devaluation is very limited outside the US.