As ever when the guardians of the US currency speak nowadays, after the Fed announcement yesterday the US dollar fell sharply in response. On the daily chart we have now reached the USD triangle support trendline again, and that is the clear dividing line between short term bullishness and extreme bearishness on USD in my view: 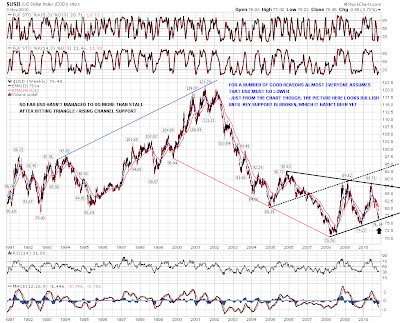 Looking at the overnight forex action, I think it is now almost certain that triangle support won't hold. If the Fed wants to devalue USD they are clearly in a position to do that, and that is just as clearly what we're seeing. All the grumbling about China recently has been less about fair exchange rates I suspect than an attempt to widen the USD devaluation to include currencies that are currently pegged to USD. Will US devaluation lead to protectionism and a trade war? Very possibly but not quite yet I suspect.

As ever this weakness in USD is likely to drive asset prices up further. Here's my USD daily chart with USD as the background breaking down how this works. I've marked up the  two recent USD spikes to illustrate the point of how closely these have been tied together in the last two months particularly. I've also marked in the current declining channel and a possible lower channel extension if the decline in USD starts to develop into a collapse: 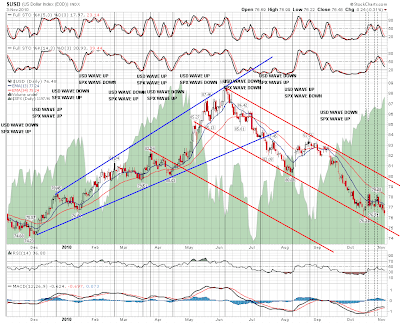 On EURUSD my short term rising channel has broken up and I've marked in a possible upward channel extension that would see immediate resistance at 1.428:

On ES resistance at 1200 has been broken overnight, and I have an immediate upside target today of 1209 on the current rising channel. If that is reached before the open I'd expect to see a retracement into the 1190s and the opening gap on SPX might well therefore get filled:

There is a definite caveat attached to that statement however. On the main current rising channel on SPX you can see that we have been trading recent within the lower half of that channel. There is a chance that we could see a break up into the top half of that channel which would open the way for a move to 1230 – 1240 SPX, though I'd expect to see some resistance at the April high: 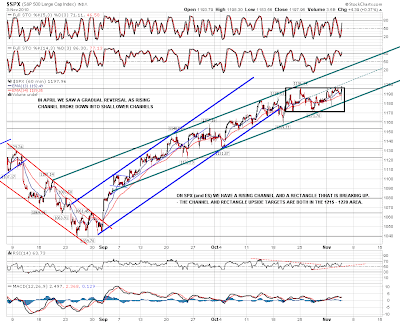 https://slopeofhope.com/2010/11/breaking-through-by-springheel-jack.html
Breaking Through (by Springheel Jack)