Yesterday I read a fascinating article in the New York Times about how Shanghai students topped all categories in a recent global test of science, reading, and math.

As you can see in the table below, Shanghai didn't just squeak by the world – – they utterly blew it away. Take note of the location of the United States in each column. The news isn't all bad……the U.S. trounced both Slovenia and Latvia in the reading category.

Just for fun, I went to The Google and started to type in "why are American students.…." The auto-fill feature, not surprisingly, didn't offer "……so smart" to complete the query.

Pack your bags, folks. As our spineless leader would say – "make no mistake" – the teacher unions in this country will assure ongoing mediocrity in perpetuity.

We saw the first significant retracement on equities yesterday, and there is an argument that it has already finished. My provisional channel on NQ makes that argument well: 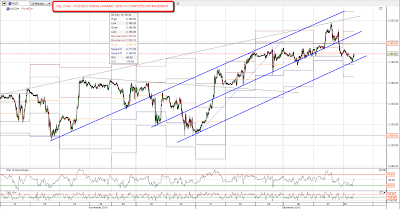 I think that there's probably more retracement coming however and I have an alternate channel that I will be using as soon as support breaks on the current one: 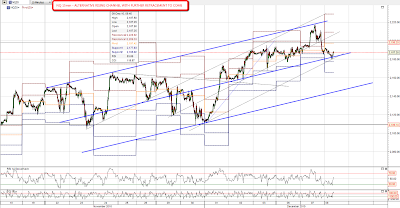 For the second channel I have a matching channel on ES with a now very well demonstrated resistance trendline: 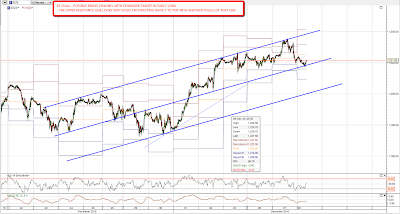 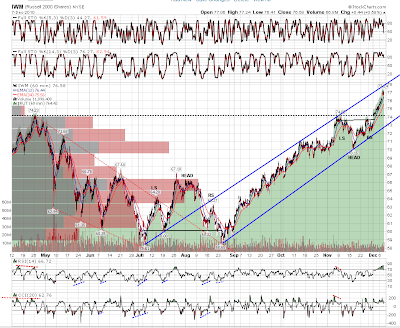 I'm also looking for negative divergence on RSI from the November high on the SPX daily chart, which looks likely as long as the high is in the 1250 – 1260 area. Ideally there would also be a failure to match the November high on EEM, the emerging markets ETF, which has been lagging badly on this move up, and an uptrend in USD, which has been a significant concern in the last few days. That would be a very nice setup for a decent wave 2 retracement on equities in the first months of next year.

I was very encouraged to see USD break back up through the important 80.1 area yesterday with a nice move on EURUSD below 1.32. I've marked a provisional broadening ascending wedge on the DX chart, though it would need a hit and reversal at the top trendline to confirm it. A new low on EURUSD in the near future would be very encouraging: 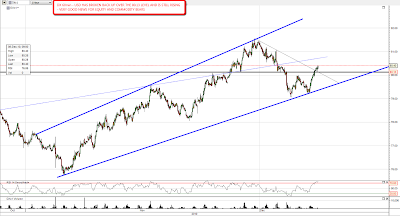 A lot of commodities are testing long term resistance trendlines at the moment. One I watch particularly carefully is silver, which hit the 30.6 target of the big IHS with the neckline at 19.5 yesterday, and also hit the long term resistance trendline at the same time. There was a strong reversal at that level and it's very possible that we've just seen a major interim top in silver that will last several months at least, and that would be very encouraging for an equities reversal at the same time: 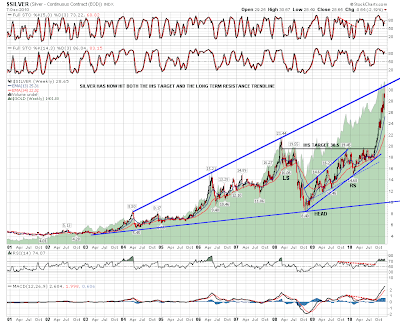 It is possible of course that we have just seen the wave 5 top, and that is Pug's alternate count on his EOD write-up yesterday which you can see here. His primary count has us in the 4th wave of this wave 5 up though, and that fits better with what I'm seeing. Another final wave up into the 1250 – 1260 area would reach the SPX IHS target and also ideally reach the upper trendline of the SPX rising wedge for an ideal short entry. Pug notes however that we've now reached a level where longs need to be cautious and I think that's right. His target for this retracement is 1212 SPX in an ABC retracement where we are now in wave B, and that fits my ES rising channel if we take a couple of days to reach it.