Slowly, but not so surely, the market seems to be continue to "fracture." Why do I believe this? Simply because my method of picking large quantities of individual stocks (as opposed to two or three very large ETF positions) seems to be starting to go my way.

At least one stock a day seems to be "blowing up" right now. Today's is DeVry (DV), shown below. Indeed, the entire for-profit sector seems to be pretty tradeable these days (I am also short WPO which, in spite of being the Washington Post, is by and large a for-profit education stock). DV and WPO are down about 15% and 8%, respectively, this morning. It affirms for me the usefulness of "gap fill" trades, since DV clawed its way quite nicely back to a gap fill as recently as last Thursday.

The five week ES rising channel saw a serious pinocchio through it on Friday, and broke definitely overnight. The question now is whether equities have made the interim top already. Pug has his line in the sand at a close below 1257 SPX and I'd go with that. There's a potential H&S neckline at 1250 ES though, so we could well see a bounce there before further declines: 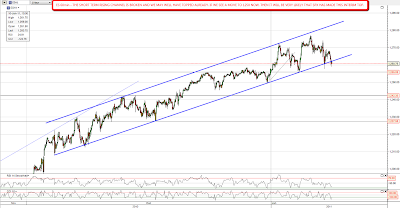 I've been giving a lot of thought to USD over the weekend as an analyst that I'm in correspondence with and respect a lot (but who doesn't wish to be named) tells me that he is expecting to see EURUSD bottom in the next day or two in the current area. That would be well short of my expectations but it could happen. Recent USD strength has been mainly about EURUSD weakness, and the commodity currencies particularly such as CADUSD and AUDUSD have remained strong while USD has been rising. Something to bear in mind and it isn't helpful that the EURUSD chart is a mess, without much in the way of useful shorter term support or resistance trendlines from the November top. On the USD weekly chart it has reached the top of the likely bull flag and we'll just have to see whether it can break above it. If it can then the next resistance level is 83.6 and I'd expect to see EURUSD fall to 1.26: 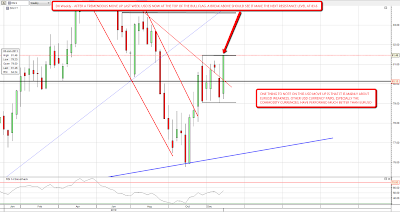 One currency that always amazes me with its strength is the Yen, as Japan is a debt-riddled stagnant disaster area. Nonetheless the Yen is seen as a safe haven for whatever reason, and shows no sign yet of becoming the killer short that it must one day become. On the ten year USDJPY chart there is a strong support trendline that was recently hit and a possible four year falling wedge. I'm expecting a move to the 87.5 area unless the USD rally does top out: 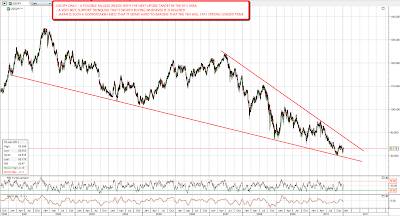 I haven't had a close look at copper so far this year so I thought I should review that this morning. On the big picture the rise since late 2008 has the look of a rising channel with the upper trendline recently hit. If it declines to channel support that would give us a target in the 350 area: 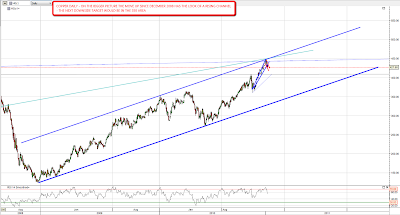 Has copper therefore made a major interim top? I think so. On the shorter term chart the support trendline for the move up since November was broken last week and the next obvious trendline support is in the 400 area. The decline so far has taken the form of a falling wedge which I'll be watching closely for direction: 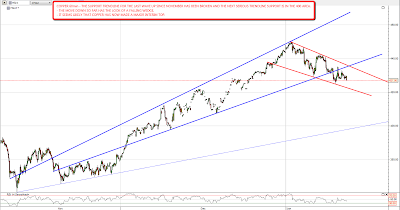 One thing worth noting on the shorter term copper chart is the way that copper bottomed well before SPX in November. It will be well worth watching for directional clues as equities correct, as it should do the same again as the correction finishes.