It was a very bullish week last week and my IHS and Rectangle targets for ES were almost met by the close on Friday. Since then they have both now been met and ES is now within four points of hitting the upper trendline of the rising wedge on the ES daily chart. That's at 1296.5 today: 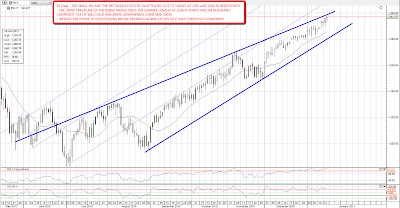 Will ES reverse strongly there? Possibly, though I'm seeing little to suggest a reversal early this week. If we are making an interim top here, then I'd expect to hang around for a few days making it, especially in opex week. There's also the complication that USD appears increasingly to have made a major interim top and it's hard to say where the short-term move up on EURUSD might finish. EURUSD is still up against the major resistance level that was reached last week, but is looking worryingly bullish, and that resistance may be broken shortly while EURUSD makes another powerful move up. The big IHS target is 1.3975: 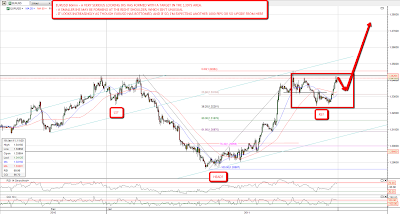 I was looking to the possible IHS on GBPUSD to mark a short term high on USD currency pairs generally, but the neckline failed to hold, and GBPUSD has made a significant move towards the next major resistance trendline at 1.613. I think GBPUSD has bottomed and am expecting to see a new high above 1.63 in the next few weeks: 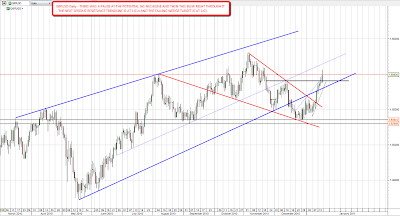 The large possible IHS on copper that I though might form last week has formed, but the neckline looks a bit too easily crossed to me and I'm not sure how seriously to take it. A short term rising channel has formed which looks more promising: 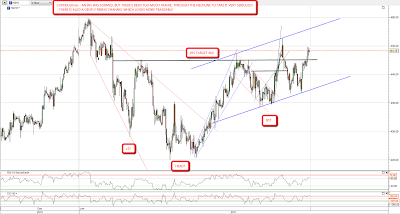 One of the indicators I look at most for indicating medium term direction is the gold/silver ratio. In practical terms that is mainly about silver, as silver has been acting as a sort of leveraged gold for years now, outperforming on both the upside and downside. The question is really then whether silver is showing serious signs of having topped, and that looks very possible. Silver has reversed at major multi-year rising resistance, has broken the support trendline up from $18, and may well now be in the late stages of forming an H&S pattern. The pattern is a bit messy though and in my view really needs silver to make a right shoulder that could, short-term, take silver back up over $30. Silver therefore looks promising, but doesn't suggest much short-term downside: 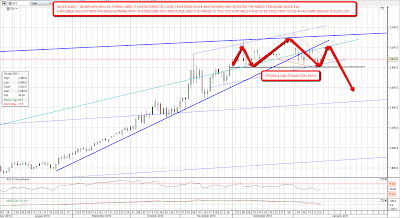 Now that USD appears to have topped I'm more doubtful about seeing a sharp correction on equities in the near future. I think we are in the process of making some kind of interim top though. On the bigger picture I'm not expecting to see the top for 2011 until we reach the 1380 area on SPX. The move up since March 2009 has been a decent fibonacci move so far on SPX, with the April 2010 high near the 61.8% retracement of the bear market, and the July 2010 low near the 38.2% retracement. The next obvious target therefore is the 78.6% retracement level, and that is in the 1380 SPX area. I'm expecting to see a decent sized correction before we see that target reached however. If the 1380 SPX level is reached it will be a serious candidate for the final high for the current cyclical bull market: 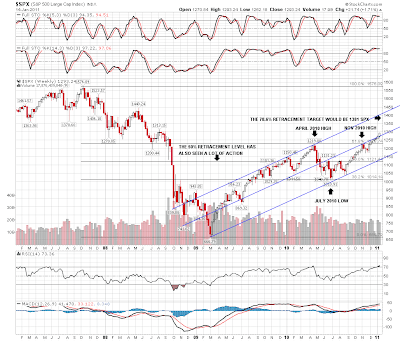 As you can see from the main rising channel marked on this chart, there is a channel target somewhat higher than 1380 SPX as well, and if 1380 breaks with confidence, that would be the next major upside target.

Hello, this is David Kern from AbjectAvarice.com with a guest post regarding Apple stock and Steve Jobs leave of absence.  That would be news enough, but this week should be even more interesting with earnings from AAPL after the bell on Tuesday.

I’ve decided to try something new with a “screencast” instead of the usual blog post.  I’m hopeful this format will help communicate better some of the cross reference sources and web tools I use – and especially my technical analysis observations.  I welcome your feedback!