Yesterday, one of the regulars here on Slope expressed puzzlement and my frequent mentions of "the evils" out there, such as Bernanke, Geithner, POMO, and so forth. He politely stated that the focus should be on the charts, and that the reason behind the price movement was really neither here nor there. He quickly got a lot of "Likes" on his comment, and I realized he had struck a chord. There was so much chatter about his comment that he wound up deleting it, but I felt it was something I should address.

I've made a habit of writing whatever is on my mind (within reason; I don't want to alienate everyone by being too candid about my feelings) here on Slope. It bugs me……..a lot……..that my beloved free enterprise system has been corrupted on an unprecedented scale, so I've been quite vocal – perhaps to the point of nettlesome – about these persons and actions.

Let us use the metaphor of an airplane pilot. I have been trained, let us suppose, as a pilot. I've got years of experience, volumes of knowledge, and a specific objective (which is to get the plane safely to my destination). I have been able to do this for years. However, one day, some people begin putting Vaseline on my windshield. This ground crew – – Geithner and Blankfein – – smear their POMO sauce all over my windshield so that things are difficult to see.

What used to work doesn't work anymore. Things don't make sense. I can't ascertain what's coming up next. Other pilots, whose windshields are similarly smeared, tell me to just keep flying, and that everything will be fine. Just fly, and don't worry about it. But I can't; it's uncomfortable, unsettling, and bothersome. So I complain about the Vaseline. And I keep complaining.

So it is with the markets today. The easiest thing to do is fly (buy) and keep flying (keep buying). It's worked out for plenty of folks. But it seems insane to me (as examples like FFIV are beginning to show us). I'm not a momentum trader. I don't play "Greater Fool" markets. That costs me sometimes, since insanity like 1999 (and 2009/2010) happen. But pushing my plane full-throttle forward, Vaseline be damned, just isn't the way I'm put together. Maybe that makes me a fool, but at least I'm a fool with integrity.

But I understand the Sloper's point about my all-too-frequent complaints about Vaseline. I'll lighten up about it, since I've made my point. You guys know how I feel. I'll try to refrain from mentioning the Evils anymore – – or at least do so infrequently – – since I understand repeating what I've said doesn't really add anything to the discussion. And that's all I've got to say about that.

The major banks have reported this week and have exceeded on the bottom line (top line for the most part was down Q4 2010 versus Q4 2009).  The reason for the bottom line beat is they reduced their provision for credit losses.  In fact each quarter since at least Q4 2009 they have continually dropped the total allowance for loan losses as a percent of total loans outstanding.

Chris Whalen said it best referring to JPM's earnings "Jamie Dimon is making a bullish bet on housing." What happens if asset prices do not rebound but rather fall?  What happens if the foreclosure process extends further with all that is going on in the industry?  What happens if mortgage cram downs occur? What happens to second tier liens?

At some point should asset prices fall the banks are not prepared from an earnings standpoint to take the hit to their balance sheet.  Rather than lower the provision for credit losses they will need to ramp them back up and take a major hit to bank earnings.  Banks are also talking about raising their dividend (good luck finding the cash for that) in the coming year.

The data below supports the theory that their "bullish bet on housing" is the wrong side of the trade. Perhaps there is a strategic reason for them to kick the can down the road right now from a reporting standpoint to build confidence in their equity.  In some sense why do the right thing now when there is a chance (albeit slim) that asset prices will rise and total allowances are at adequate levels.

As traders we know prices ALWAYS over correct.  Whether it be to the downside or upside, the market never gets it right initially.  Looking at this chart below which looks at historic home values the argument can be made that home prices will depreciate possibly as much as 30% more. 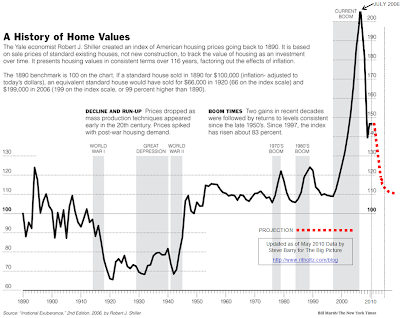 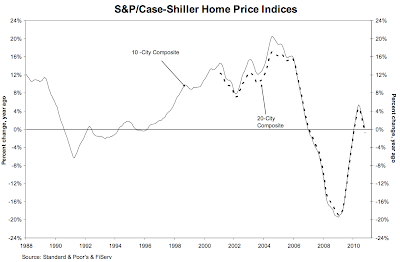 The chart below shows sales activity in 25 major metropolitan areas.  There are no "bids" in this market. How can prices rise when supply outweighs demand? 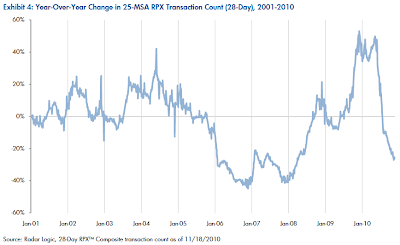 The banks may argue that falling asset prices does not mean increased balance sheet risk as they hold to maturity or higher delinquency rates.  Perhaps that is their bullish bet.  There is plenty of data that counters that argument and clearly shows the less financial interest a homeowner has in their asset the far greater chance they will strategically default.

Hi Folks – – I took the snapshot below before the opening bell today and am just now putting it up. I think SLV is headed for about $24.50, or a touch lower, based on both a gap-fill and a measured H&S target. I did a profitable day-trade on SLV today, but I'm frankly too nervous to hold it overnight, in spite of my optimistic prospects for its downturn. It's just way too volatile.

I'm heading out right now for a business meeting but will put up a new post later this afternoon. As I'm typing this, GOOG earnings are out, and I guess there's a lot of chatter about big management changes there. The earnings were apparently stellar, but as I am typing this, GOOG is up not even 1%, and the NQ, incredibly, is actually lower on the news.

A reader at my blog site asked me to do a review of the trading in the SPY ETF for today … I do these quite frequently, so I encourage readers here on Slope who struggle with intraday trading to spend some time at my site to help them in their battles with Mr. Market:

It's really as simple as that … place your stop above the 50ema and keep assuming that the TREND DAY will continue until it proves to you that it is not going to.

END_OF_DOCUMENT_TOKEN_TO_BE_REPLACED

ES fell to my first candidate H&S neckline yesterday and bounced there. That bounce hasn't been sustained so far, and I'm doubtful now about seeing much of a bounce today, though the positive divergence on the 60min RSI and CCI still looks promising. The small bounce that we have seen has has formed a stumpy right shoulder onto the potential H&S and on a conviction break of yesterday's low I'd been inclined to take it seriously if only because the next obvious targets are in the mid-1250s in any case:

There are two reasons why the mid-1250s are the next obvious downside target. The first is that the lower trendline of the big rising wedge on the ES daily chart is in the 1254 to 1256 area. The second is of course that there is a second candidate neckline for a possible big H&S located there at 1257. If that were to continue forming it would indicate to 1228 with the RS forming on a bounce from the 1257 area to about 1275. I've not marked that on this chart but it's worth bearing in mind:

There is one other downside target worth mentioning, and that's in the 1270 SPX (1267 ES) area. That's the daily 20 SMA, which is usually touched regularly on retracements but hasn't been touched since the start of December: 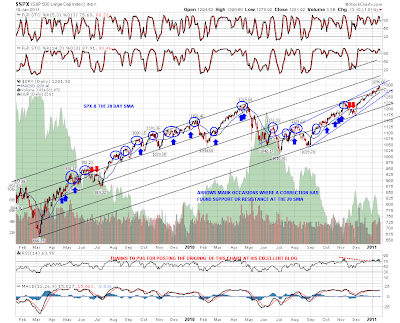 Nasdaq has  also been failing to bounce overnight and if we see a further move down today the obvious target is the lower trendline of the megaphone in the 2260-5 area:

I've been reading a lot about the EURUSD break up through resistance this week and the general view seems to be that it will rise further in the near future. That could be right of course, but I'm leaning towards the view that EURUSD has made a short term top and will retrace to the 1.32 area. I have two main reasons for thinking that, and I could be wrong, but they are as follows. Firstly EURUSD has broken down yesterday from a rising wedge which appears to be a wave 5 ending diagonal. I've marked a wave count on the chart and the rising wedge target is 1.325. Secondly I have a nice looking, though still unproven, rising channel with the lower trendline in the 1.32 area. EURUSD has recovered most of yesterday's losses overnight and we'll have to see whether it can make a new high from here. I hope not, as a retracement on equities will be much easier going with a falling Euro:

I'd expected to be leaning long today but after looking at the charts this morning I'm still leaning short. There's a good chance we'll break 1260 ES today in my view. If so we should bounce at one of the targets not far below it.