The signs come in fast and furious now.  The gold analyst talking in December about a February upside explosion to above 2000/oz., now talks about money being made on the short side for at least the next 6 months.  Large speculators have been reeled in significantly on the CoT, the public opinion of gold – sorry, I pay for this service and cannot reproduce the data here for free – is good to go, and then there are the technical downside targets, which NFTRH has had loaded for weeks now, coming into view.

Trend followers are doing what they always do and for some reason, when people read things on the internet with titles like 'Gold Loses Critical Support', they get their pants all bunched up.  A topping pattern appeared in gold back in December.  From this pattern, there were several downside potentials, none of which – including the remote prospect of a test of the massive support at 1000 – should be causing heartburn right now.

In the precious metals sector, you operate on a risk vs. reward basis, strap in for volatility and as I have long said, let FEAR RIDE SHOTGUN.  Embrace it.  Don't be a sissy, as Jonathan would say.  This is the only way to make long term gains and out perform the herd.  Be brave when they are sucking their thumbs.

You have no idea how often I am negatively reinforced, like when the intelligent deflationist took a well spoken exception to my bullish stance on oil in early 2009.  When I was told by a financial professional and former subscriber, why treasury bond yields were going down and my 'rates rising' stance was incorrect in Q4 of 2010.  And now with gold, we have the ultimate contrarian opportunity in the asset that is contrary the vast, inflated mess of global assets.

There's a bullish feel to everything this morning. Copper has broken the recent declining resistance trendline and may be forming a large IHS indicating to the 450 area. If it breaks through the neckline I have an immediate target just over 439 and a secondary target at declining resistance in the 444 area:

The big question today on equities of course is the GDP number and the reaction to it, and that's obviously hard to assess. Overnight action looks cautiously bullish on NQ however. The rectangle target at 2333 was made yesterday and NQ pulled back to support in the 2318 area overnight. That support held and if we see a strong move up on NQ from here, the remaining pattern target is on the (now huge) broadening top in the 2390-2400 area. NQ could make that target:

On ES there remains the possibility of a dip back to test support at 1286, and a break of that support would be bearish with the next immediate support at 1276. To reach it though would require a major technical breakdown, and I'll show why that is on the chart after this. ES is bumping around just under yesterday's resistance level but there's scope for a move today to the 1300 level and perhaps 1303 if we see a touch of the larger channel's upper trendline:

I was complaining in December that the rise on SPX from late November was shapeless and hard to pin down for targets. That's no longer the case, though the perfect rising channel that has formed on the SPX 30min chart will not be a welcome sight for bearish eyes. On the plus side we're not far above support and a break down through it would be very bearish. On the minus side the upside target looks to be in the (cough) 1350 area, though there are two decent resistance trendlines marked that should provide some resistance in the 1302 and 1310 area if hit today. The main rising wedge on the daily SPX chart has the upper trendline in the 1310 to 1315 area today: 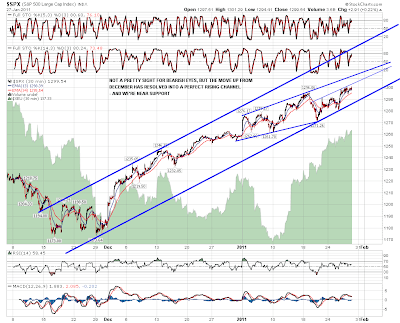 The most interesting chart this morning is definitely GBPUSD, where a textbook bear setup may be about to fail dramatically. The chart is simply beautiful and my commiserations to any GBPUSD shorts if this setup fails, though the odds are still that it will play out as you would expect:

Hard to say what the GDP figures will bring, but I'd be wary of shorting the picture I'm seeing this morning. There are still some signs of a top forming here, but the old adage that you should never short unless you see significant weakness comes to mind strongly here. Good advice though I'd add to it that a major trendline hit can also be a very good short entry. Unless we rise a lot, we're not going to see one of those today.