The symmetrical triangle on ES finally broke down yesterday morning and the downside target for that is 1252 with a 48% probability of reaching target. I'd be inclined to put that probability higher given the technical backdrop, and I'm looking for this correction to bottom out between 1220 and 1260 if it is a correction. Any lower than 1220 is a fall of over 10% and that would no longer look like a simple correction, though I have the main bull market rising channel support trendline in the 1170 area I think. SPX finally broke the support trendline on the rising wedge: 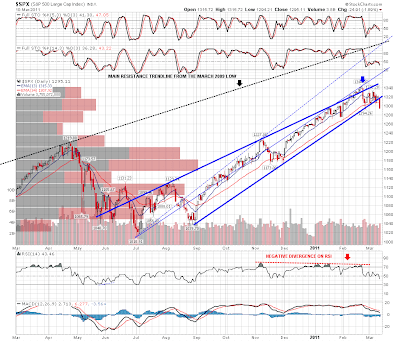 The Dow broke the rising channel since last summer: 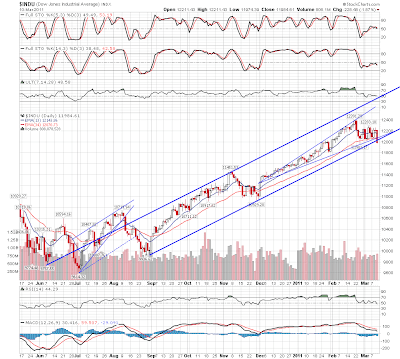 In inter-market terms this is now looking increasingly conventional, with copper leading, and both USD and treasuries rising as flight to safety trades. 30yr treasury yields have broken the shorter term uptrend and there is a clear HS reversal pattern forming on the chart: 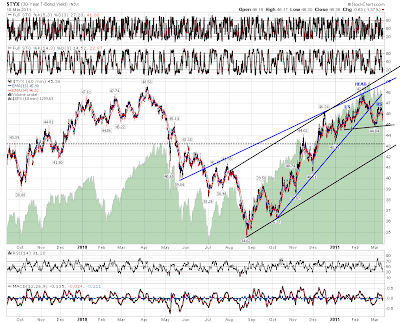 Much to everyone's surprise, including mine, USD has risen from its deathbed and is bouncing again in what may be another attempt to reach the upper trendline of the symmetrical triangle on the weekly chart: 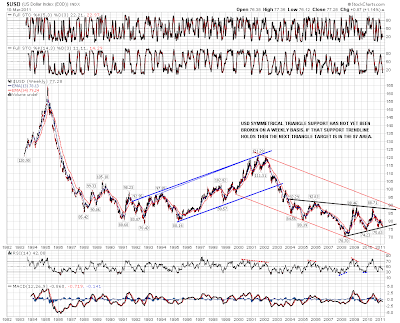 EURUSD has broken 1.38 support which looks promising for USD. The oil bulls and bears are duking it out at the 100 level and the bears seem to have the edge at the moment, with a sloping H&S on the 60min chart. The real question is however whether we've just seen an interim top or a really major high. Too soon to tell for me though we've been hitting some major trendlines recently in many areas. Everyone knows about the Nasdaq resistance at the 2007 high but looking at the longer term SPX chart the level for the recent high also looks significant, just as the high last April was at a very significant channel resistance trendline: 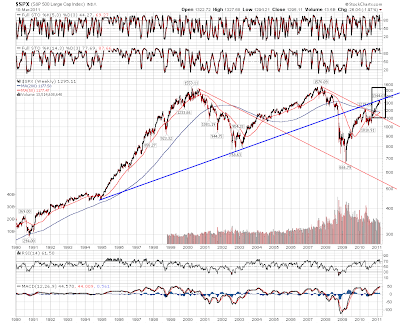 I've posted the EEM:SPX chart a few times in recent weeks as it does support the view that this recent top may be a major one. If you look closely you'll also see that EEM has broken the support trendline from last May and then made a perfect kiss of death retracement to the broken trendline before falling again: 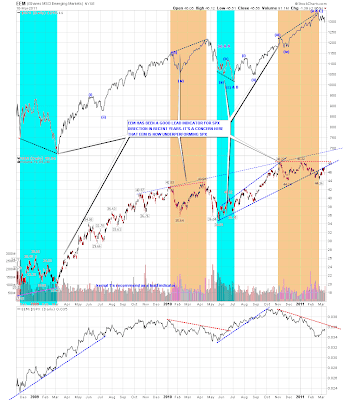 Hard to say at the moment though and we'll have to see how this develops. It seems too soon to me to be putting in a major top with more than three months of QE2 yet to run, and we haven't made my declining channel target on the long term CPI-adjusted SPX chart yet, though that target might not be hit in the current wave up of course: 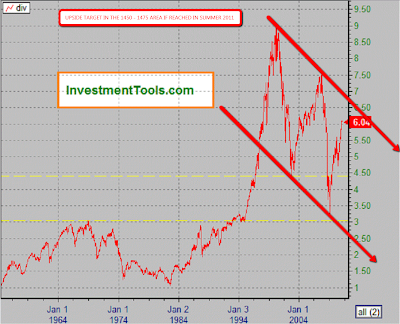 Short term the trend is now firmly down in my view and I'm expecting more downside. ESH1 has reached the first likely bounce level in the 1285 area overnight and is bouncing so far. The next support level is in the 1275 area and I'd expect a bounce from one or the other. If we bounce today I'd be looking to find significant resistance in the 1300 area. If NQ falls a bit further today the main support area I'm looking at is in the 2250 area. I have good trendline support at the overnight lows though, and if they hold today I'm expecting resistance to be in the 2300 area.