Personalities define people. Some people are full of hate; others aren't. Some people are consumed with themselves; others seek to help others. It's a very diverse planet. Slopers typically embody the best of the human spirit.

I see myself as a pretty gentle soul (which other blogs have termed, sneeringly, as "sensitive", or worse) and, as such, got my share of taunting in the 7th and 8th grades. I was never physically bullied, but I've always despised bullies, both the verbal and the physical flavors.

This sentiment is shared among most Slopers, I imagine, which is why I wanted to share this video which has been sweeping the web over the past week. In a nutshell, the fat kid in this video had been picked on mercilessly at school. Some little punk decided to step up his bullying a notch and have his flunkies actually film him punching his victim in the face.

The victim - Casey Heynis – had finally had enough. I'll let you see the results. I can only picture my detractors playing the role of this punk little kid. Justice was finally served, and Casey Heynis is a hero to non-bullies around the world.

There was another strong bounce yesterday and many have called the bottom again here, which has been the case every time there has been a bounce since this correction started. There are no strong indications that the bottom has been made yet though, and I'm leaning towards seeing more downside on balance, though I think the bulk of the correction is behind us now, if this is just a correction which seems likely. I've had a close look at the SPX daily chart since this cyclical bull started in March 2009, and apart from the low in July 2009 every significant bottom has been signalled with positive divergence on the daily RSI, which we're not seeing yet. The big lows in July 2009, and in Feb, July and November 2010 were all also at very significant support levels, and while 1255 is a significant level, the obvious target is at the 1220-1230 level, and that has not yet been reached. Here's the SPX daily chart for the bull market so far: 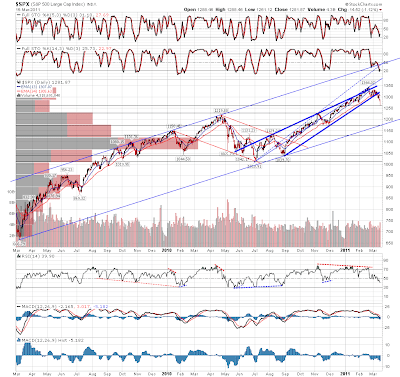 Vix is looking interesting. I called the target for Vix a bit high yesterday, as it was a little hard to pin down on the chart, but Vix rose exactly to my upper resistance trendline and reversed there: 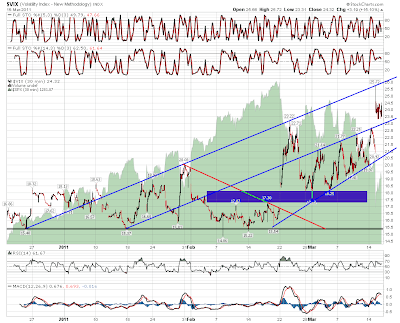 On the daily chart Vix moved above the daily BBs for the second time in this correction and that does look significant, as Vix may now be setting up to give a buy signal. These have a reasonable track record at preceding significant bounces, and I'll be watching to see whether this develops into a Vix buy signal: 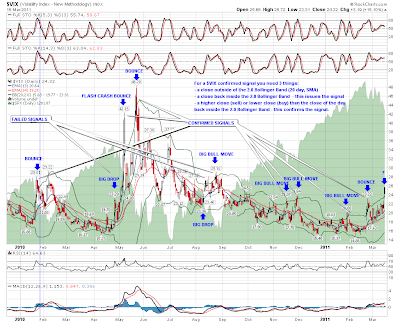 With both Yen and USD looking seriously unwell, the remaining flight to safety trade still running is to treasuries, and I posted the IHS on 30yr treasuries yesterday. Here's the inverse of that on the yields chart and you can see where I'm thinking yields are headed here. We're still some way from the obvious target and that is supporting the case for more equities downside here: 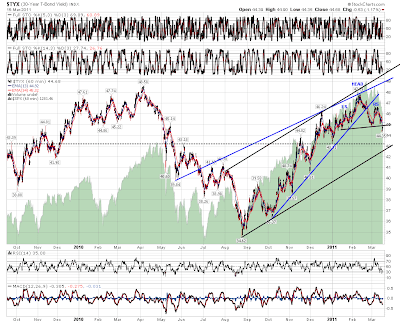 EURUSD is continuing to struggle at 1.40, but I'm not seeing much to suggest that USD will do more than trade sideways during this correction. Unless EURUSD can break current rising channel support, now in the 1.382 area, then I'm expecting EURUSD to continue moving up after the equities correction is finished:

Copper is looking divergently strong here, and is now retesting the broken H&S neckline in the 425 area. Copper's been acting as a decent lead indicator recently, and a break up with conviction would boost the bull case considerably:

Oil is stabilising as pro-democracy unrest in the Middle East is being suppressed. I'm expecting a bounce back to retest 100 and an H&S may be forming that may then take oil back into the 80s. A break back up through 100 would suggest a retest of the recent highs:

I'm still of the view that this is just a correction and I'm looking for a decently signalled low here, though that doesn't always happen. There are some signs that the correction is drawing to a close, but not enough to think that it is over yet. I'm still leaning bearish but would be concerned if ES breaks back up over 1285 with conviction.  I'm also watching the 425 level on copper as a possible directional indicator.