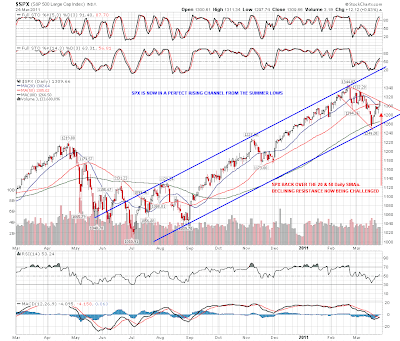 ES was at a bearish level at the close yesterday, as it stopped just below a candidate rising wedge upper trendline, and the short term setup was therefore looking distinctly bearish. The after hours spike up then took it through that trendline however and that broken trendline has acted as support for ES overnight. Both ES and NQ look overbought on the 60min, but as long as that support holds (currently at 1309.25), ES still looks bullish:

Copper is consolidating under declining resistance within a short term broadening ascending wedge. I'm leaning towards seeing that consolidate a bit longer, but an hourly close above 443.75 would signal that copper is breaking up. I have short term support at 440.50, rising support from the low at 438.75, and the IHS neckline at 437.75. A break of 437.75 with confidence would look very bearish but I'd be surprised to see that:

I post my EEM vs SPX chart regularly as an indicator and there are two important levels to watch there at the moment. The first level is the broken rising support trendline on EEM, which is close to a second retest. The second is the EEM:SPX relative trendline, where a break of declining resistance will signal that EEM has returned to outperforming SPX, which would look bullish: 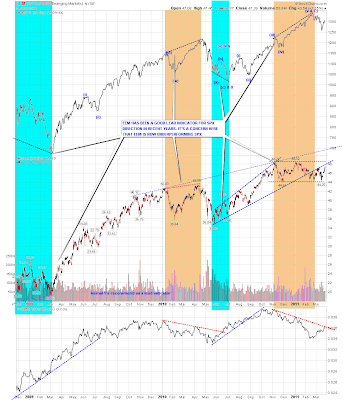 Vix has collapsed in recent days, and is now back in the gap zone. This is the third attempt to close the open gap since the correction began and I'm watching to see whether Vix can close the gap this time: 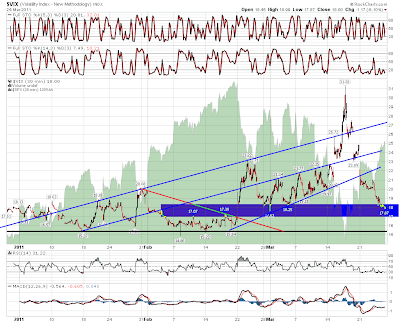 Lastly for today I had a close look at gold futures after it dipped sharply yesterday, and noticed an interesting setup on the 60min chart, as it appears to be partway through an evolution from a rising wedge to a rising channel where (unusually) the lower channel support trendline has already been established. if this continues then it should move down into the 1415 to 1420 area before reversing back up. That would be an interesting long entry level:

NQ and ES are both overbought on the hourly charts and I wouldn't be at all surprised to see some consolidation today. ES has decent support at 1304 and 1300, and NQ at 2300. I'll be looking for good long entries on any dip and would like to see SPX close the week above the daily 50 and 20 SMAs.