It's just one stock, but it's an awfully important one – Apple, Inc. I know how ga-ga bullish everyone has become these days, including, it seems, almost all Slopers, but I want to quietly point out that the broken trendline in AAPL is at least worth a glance.

Most mornings I have a quick browse through the blogs of my favorite chartists and analysts but I was in a rush yesterday and didn't manage to do my usual rounds, so I missed Cobra's warning that after Monday's bearish engulfing candlestick on the SPX daily chart, yesterday was statistically 90% likely to close up. Nice call from Cobra on his 03/28/2011 Market Recap.

Cobra still thinks that we'll make a new low on SPX with positive divergence on the daily RSI, but I'm very doubtful about that, as barring a new high on SPX, there's not much left to confirm that we're in a new wave up in my view. It's disappointing that we didn't see that lower low with positive divergence, but it only happens about two times out of three, and so it isn't unusual not to see it. Cobra makes the point that the rise in the last nine days has failed to exceed the decline in the previous nine days, and so looks corrective, and he could still be right of course, but strong support has now been established at yesterday's ES low at 1300 and as long as that holds I'm not expecting a lower low.

I posted four reasons to now be bullish on SPX last night in various places, and they are as follows:

These are all good reasons to be bullish, and as long as 1300 holds on ES, I'm taking the view that we're back to bullish business as usual, with buying every dip being the order of the day. Here's the updated SPX daily chart with all of the various MAs and EMAs I watch on the daily shoehorned onto it. The 13 and 34 EMAs are in thin dotted lines to distinguish them from the others: 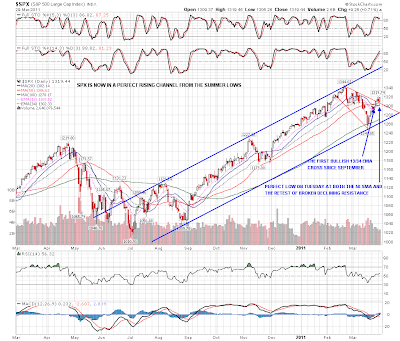 Browsing through the other main indices this morning the Transports chart springs to the eye for a couple of reasons. Firstly there is a perfect rising channel on it as with SPX, and secondly on the daily chart there was a lower low with positive RSI divergence. TRAN has been stronger in this correction than SPX or NDX, so we're likely to see a new high there before the others: 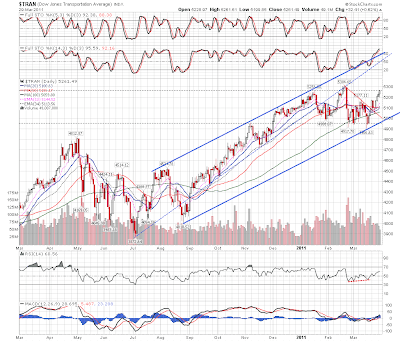 The Vix has already given up most of the gains made since the correction started, but hasn't yet managed to fill the gap at 16.88. I'll be looking for that to fill over the next few days and will see a move below it as additional bull wave confirmation: 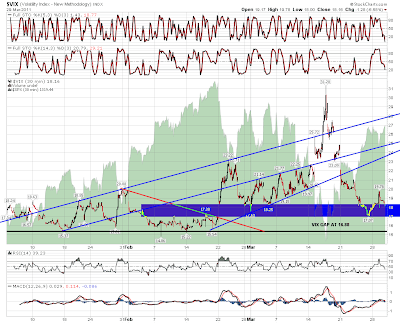 I understand that yesterday was a trend day up in the end so we're likely to see a day or two of retracement or consolidation here. Strong support has now been established at 1300 on ES, which is also close to the 50 SMA on the daily chart. There's also decent support established at 1315, and that would be an obvious reversal level, with the gap fill at 1316.5 today:

On NQ strong support is now established at yesterday's low at 2290, and I'd be surprised to see any move below that. There's also a support zone in the 2310-20 area that should cap any downside move today:

I'm not sure what to make of copper at the moment. I'm thinking it might make most sense to see copper as trading within a series of strong support/resistance levels. If so the next decent long entries would be a test of the 426.5 level or a break up through the 437.5 level, which is also the neckline for a large IHS, and a shorter term IHS that may be forming at the moment. On a break of 437.5 the next target would be 445.5:

It looks as though ES will gap up this morning, and there are a number of reasons to think that this gap will fill today. One of those is the tip from the GapGuy last night which was 'The past two days' unusual price action has only happened 5 times in the past 10 years and all 5 times it gapped up the next day and filled by the end of the session'.

I hope everyone is enjoying this bounce off of the recent lows  …. I thought I would f*ck with everyone's minds some more by putting up a comparison between the S&P500 index currently and the topping action in 2007.

The reference points line up pretty nicely in terms of days from the starting point (end of the correction going into the last rally).  I extrapolated forward the 2007 pattern to get the projected dates along with the index levels.  The new high in 2007 was exactly 1.0% above the previous high … very acceptable as a double top retest.

It seems incredible, but Slope of Hope sprang to life six years ago today. I first started this blog during a profoundly happy time in my life – – I had just sold Prophet two months before, and I was enjoying a vacation in Cancun with my family. At my wife's urging, I started a personal trading diary as a blog. My last sentence on that first post was "The real question is going to be if I'm going to find enough time to do regular posts!". I guess I found the time!

I've learned a few things about blogging in the six years that have passed since that first post. A few tidbits of wisdom are:

+ You can't please everyone – I confess that I'm a person who likes being liked, but when you get a self-selecting group of traders who are going to have all kinds of personalities and quirks, there's going to be conflict. I have tried to run as decent an establishment as possible, but over the years, there have been plenty of folks who have moved on for various reasons. My heart's in the right place, and I try to make Slope welcoming for all, but I've learned that finding a good middleground is a big challenge.

+ Culture Counts – Part of the reason for Slope's popularity and longevity, I think, is because it's a relatively peaceful oasis in the wild, wild west of trading blogs. Some of our brethren trading sites are a cross between Lord of the Flies and Animal House, and my desire is for Slope to be a place where traders can share ideas, stories, anecdotes, travails, and ideas. I want Slope to be a place where I feel comfortable and where I can safely assume most others are comfortable as well, and I think we've achieved that.

+ The blog will ebb and flow with the market – I know this is perceived as a bearish blog, and the traffic shows that. During the (all-too-brief) Japanese-led dip in the market earlier this month, traffic on the blog nearly doubled. Now that things are moving higher in the market again, traffic has softened. I've learned not to take it personally. There are a lot of fair weather friends on Slope.

I am deeply grateful for three groups of people. First, to those of you who have stuck with me through thick and thin and are still here, you have my deepest gratitude and respect. Second, to that "vast silent majority" that comes here every day to anonymously enjoy the blog, I offer my thanks, but I still encourage you to get active in our wonderful, friendly comment section! Third, to those of you who recognize that the only compensation I get from this blog is from clicking of ads which interest you (whether I mention it or not) – thank you for your clicking finger's hard work!

This blog has changed my life, mostly for the better, and as we enter our seventh year – – surely a profoundly rare feat in the world of trading blogs – – may the trading gods smile upon us Slopers and grant us an abundant harvest. Thank you for being here for me, and for each other.