Dow closed over the February highs yesterday, while the Transports index remained over the February highs, so we have a new Dow Theory Buy Signal. Strangely I haven't read much about that in my morning reading. Neither Arthur Hill nor Cobra mentioned it in their daily wrap-ups last night. Odd. This is further confirmation however, if any were needed, that a new wave up is in progress. Here's the Dow daily chart with a decent though not quite perfect rising channel from the summer lows last year: 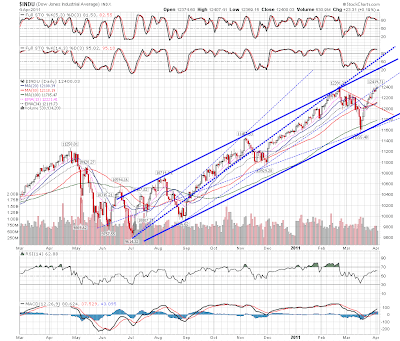 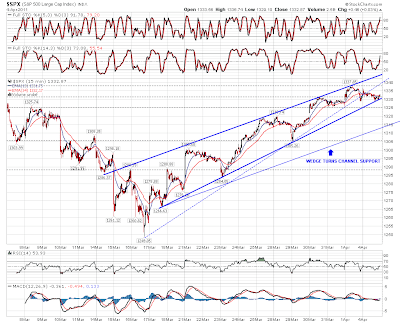 Here's the updated NDX chart where the lower trendline only has three hits, but the setup looks pretty solid there too: 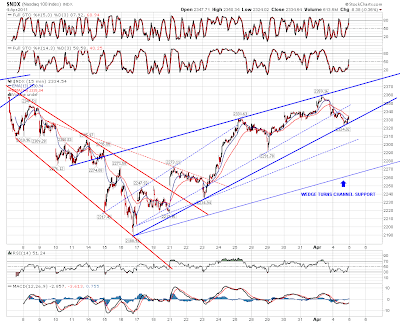 I find myself somewhat out of sync with some others this morning in that I think we may be looking at a retracement starting now, though there is definitely scope for another high within those rising wedges. ES and NQ have both been weak overnight and if SPX and NDX open below those support trendlines then I'll be expecting a continuation lower. If that happens I'll be watching 1300 ES and 2290 – 2300 NQ as strong support levels. On ES and SPX that would fit with a retracement to the daily 20 moving average, currently in the 1300 and 1304.5 areas respectively: 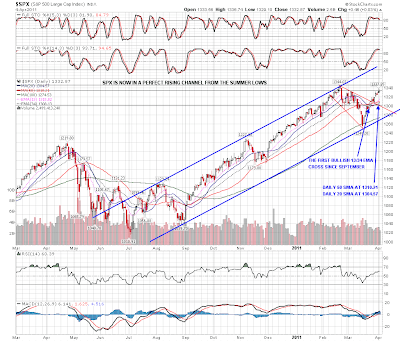 If we are to see new highs before a retracement that would seem to be supported by the copper chart at the time of writing. Copper reversed at the potential IHS neckline yesterday and the subsequent low (so far) is a close match to the left shoulder on that potential pattern. If that continues to form that would look bullish for equities. A break down from this forming pattern would look distinctly bearish, and on copper that would most likely target strong support at 407.75:

I've been having a look at silver this morning, trying to see if there are any obvious reversal levels. I don't have anything very strong, and the thing that springs to the eye most on the silver chart is the very strong internal support / resistance trendline, which has acted mostly as support, but sometimes as resistance since silver was at $18. That is main support at the moment, but I do have a resistance trendline that may provide some resistance in the 39.5 area:

I was talking yesterday about the debate about whether continuation head and shoulders patterns exist. I tend to take a practical view that as I see them a lot, and they frequently play out, then I might as well treat describe them as that. To an extent though the debate misses the point, as the essence of any HS pattern is the formation of a strong support or resistance trendline, and the strong move that is often seen when such a trendline breaks. For what it's worth here's my favorite long term continuation IHS, seen on Dow forming between 1969 and 1980, with the neckline break in 1983, and which played out a long long way beyond the pattern target at 1400. It has crossed my mind more than once that SPX may have been forming a similar continuation IHS since 2000, and if so, we're in the late stages of forming the head on that pattern: 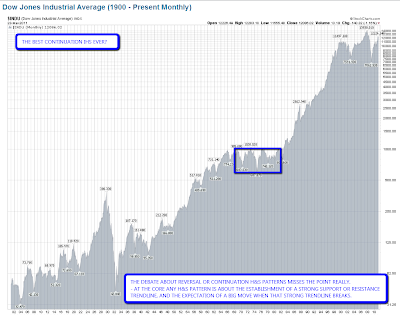 I'm in two minds about market direction today and I'm watching the support trendlines on my SPX & NDX charts to see whether they are broken. Until they are, I am guardedly bullish. As soon as they are broken I will be regarding the retracement as in progress, and will be seeing a test of the daily 20 SMAs as the most likely target.