Another day of sideways chop yesterday, and SPX has built up a worrying series of topping candles. These don't always signal a trend change, but they do that much of the time, and that is a real concern here until overhead resistance is broken. Here it is on the SPX daily chart: 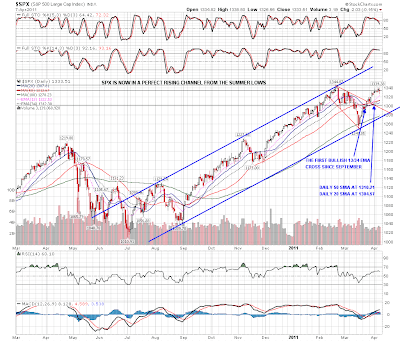 To add to the worrying technical picture, the Russell 2000 broke down from the recent rising channel yesterday, and that is a warning signal to consider seriously: 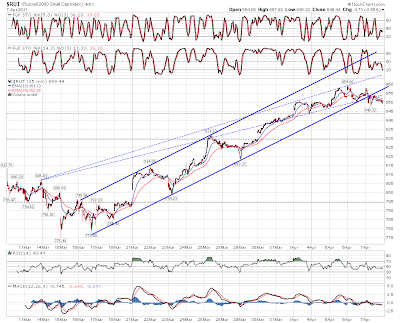 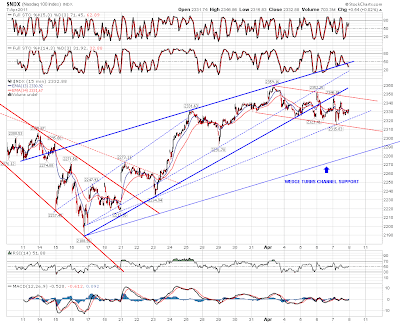 I have mixed feelings about equities here and there is a real risk that we are seeing a double top on SPX if it can't break up from here soon. Copper has broken up very convincingly but if SPX just chops sideways until copper reaches the potential IHS neckline at 4.55 that would be a warning signal. As it is copper is still some way short of there, though it has broken 4.45 with confidence and looks likely to reach 4.55 next. I won't post the copper chart today as I already have seven other charts I'd like to post, and yesterday's chart still covers it well, but if HG/copper should retrace to 446, that should be a nice long entry level with a target at 4.55.

The US dollar had another bad night, and is now below 75.5. EURUSD has now reached the upper wedge trendline in the 1.44 area and we might see a reversal here:

The really interesting forex chart today though is AUDUSD, where AUD is hitting a four year rising wedge upper trendline intersecting with another 18 year support / resistance trendline. If we are going to see a reversal on AUDUSD anytime soon, this is the place. Here's the setup on the weekly chart:

I was looking at 30yr treasury yields this morning for a directional clue on equities. That tends to trend up or down with equities, but sometimes weakens ahead of them. I'm not seeing any reason to think these are about to reverse seriously, though they're obviously overbought on the 60min RSI: 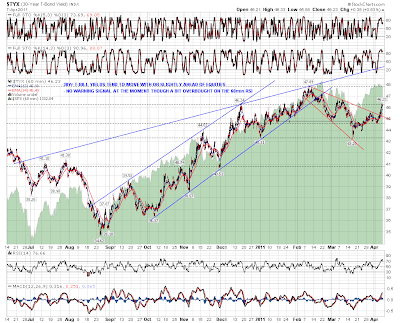 The last chart of the day is the very interesting chart for the Nikkei. I had a look at that yesterday after a talking head on Bloomberg suggested that Nikkei might be a long term buying opportunity. Looking at the chart, I'm inclined to agree, as the Nikkei has recovered and retested the broken rising channel lower trendline. As long as that trendline holds the Nikkei's looking pretty solid. :

I don't expect a serious equities reversal here, and I'm not really expecting to see one. There are some worrying signs of weakness though, and until ES and NQ break up through 1338 and 2350 respectively, there's definitely some reason for short term caution on equities.