How did I spend my morning, you ask? Simple. I updated my stops. Then I went to Buzz Lightyear Star Command with a goal of getting over 300,000 points, which would be a new record. After six valiant attempts, I finally did it. I can die in peace now.

I was cautious about the copper situation yesterday morning and copper has duly broken down towards the strong support level and potential IHS neckline at 438. That would be a 50% retrace, more or less, of the last move up from 422 and I'm expecting it to hold. If it folds the overall situation will start to look much more bearish:

Until that happens what we're seeing is still in the normal range of equity pullbacks in my view. I mentioned a couple of times last week that the daily 20 SMA on SPX was an obvious target for any pullback. That's at 1310.41 today, and 2296.94 on NDX, though support there doesn't tend to be as good as on SPX. Here's the SPX daily chart: 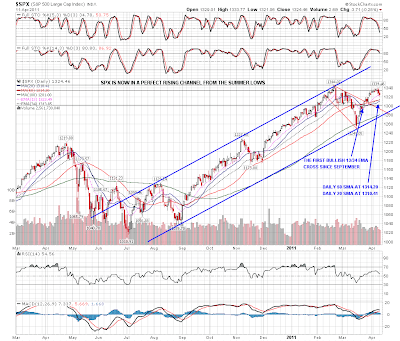 The short term support trendline I was using on NQ broke down overnight but the current retracement fits well into a larger declining channel. The obvious target today on NQ is the 2290 area, for support on that channel and the potential HS neckline there. Here it is on the NQ 60min chart:

On ES I have potential rising channel support at 1310 and another potential HS neckline at 1300. If this is just a pullback then 1300 should hold:

EURUSD has stalled the last two days. Looking at the rising wedge it has either broken up or is overthrowing. I'm leaning towards a break up, as the upper channel trendline for the rising wedge to turn into a rising channel is already established. Long term declining resistance has been broken with confidence and I'm no longer regarding that as resistance

The strong support trendline on oil was damaged in the retracement last night and oil longs should get more cautious here. If the trendline breaks we could see a retest of 100:

I'm still seeing this pullback as a retracement within a larger uptrend, and if so, there's a good chance that the retracement will conclude today. Even if there's more coming, we should see a decent bounce from the strong support levels just below. It did cross my mind yesterday as I was chided for not just saying JBTFD in the post at slope yesterday that the last time I'd been told that was as I was warning of major trendline breaks at the February high. Hopefully that wasn't a topping signal. 🙂

Initially, I wasn't planning on posting this here, as some of you will find it a little basic. But I received an e-mail over the weekend from a Slope lurker and self-described beginner with questions, so I thought other beginners lurking here might find some value in it. The only new info in the post below for the rest of you will be this: the cost of hedging against a >20% drop in DIA over the next several months dropped to 0.84% today (Monday).

First though, a quick, unrelated note: In the comments here on Friday, I mentioned a stock that someone had posted about on Short Screen the night before, PUDA, was plummetting. Trading in its shares was halted Monday. On to today's post:

"Plan not to panic" next time your stock portfolio drops 40%. That was hedge fund manager Joel Greenblatt’s advice for retail investors in a column on his Magic Formula investing site last year. So what did Greenblatt do when Mike Burry, a hedge fund manager Greenblatt’s Gotham Capital invested with, was down 18% in 2006 (after several years of spectacular returns), due to early, illiquid bets against subprime mortgages — bets that Burry wanted to hold to fruition? From p.190 of Michael Lewis’s book, "The Big Short,"

What distinguished Gotham was that their leaders flew out from New York to San Jose and tried to bully Burry into giving them back the $100 million they had invested with him. In January 2006 Gotham’s creator, Joel Greenblatt, had gone on television to promote a book and, when asked to name is favorite "value investors," had extolled the virtues of a rare talent named Mike Burry. Ten months later he traveled three thousand miles with his partner, John Petry, to tell Mike Burry he was a liar and to pressure him into abandoning the bet Burry viewed as the single shrewdest of his career.

Still he [Burry] heard not a peep from his investors.

To his founding investor, Gotham Capital, he shot off an unsolicited e-mail that said only, "You’re welcome." He’d already decided to kick them out of the fund, and insist that they sell their stake in his business. When they asked him to suggest a price, he replied, "How about you keep the tens of millions you nearly prevented me from earning for you last year and we call it even?"

If the billionaire professional investor Joel Greenblatt — who, due to his funds’ short positions isn’t as exposed to market risk as long-only, un-hedged Magic Formula investors — has trouble stomaching an 18% decline, why would he expect retail investors to suck it up when they get hammered by a 40% drop?

Note that I’ve only singled out Greenblatt here because of the juxtaposition between his advice and his actions in that case; he’s got plenty of company in telling regular equity investors to just suck it up next time the market tanks. About the only form of risk management that gets mentioned frequently in popular investment columns is diversification. Diversification has a significant limitation though.

Diversifying among a basket of different stocks reduces idiosyncratic (or, stock-specific) risk, but not market risk. An example of idiosyncratic risk would be if news broke that the CFO of a company you owned stock in had been cooking the books. In that case, you’d obviously be better off if you’d had your money diversified among five or ten different stocks instead of having all of your money in that one, shady stock. When the market tanks though, nearly all stocks get hammered. That’s market risk.

In fact, not only does diversifying among a bunch of different stocks not protect you from market risk, but diversifying among different, putatively non-correlating asset classes (e.g., stocks, bonds, commodities) doesn’t always help you either. The problem there is that when the worst happens, correlations go to one: almost everything tanks. For example, when the stock market crashed in 2008, so did commodities, corporate bonds, and other asset classes (about the only asset that did well was U.S.Treasuries, but that doesn’t mean that they’ll do well next time the market tanks).

You can find a list of put options available on those index ETFs by clicking on the "options" tab on their quote pages on sites such as Yahoo! Finance, Morningstar, or Google Finance. For example, here’s the list of options available for DIA, the ETF that tracks the Dow (scroll down on that page for the put options). As you can see from clicking that last link, there’s a whole lot of them. Which one should you buy if you want to hedge?

First, you have to ask yourself how much of a market decline you’re willing to stomach (all things equal, the bigger the decline you’re willing to tolerate, the cheaper it will be to hedge against — similar to how car insurance will be cheaper when you have a higher deductible). The threshold I usually use when I hedge is 20% (i.e., I want protection against any decline worse than that). The idea for a 20% threshold came from a comment fund manager (and Stanford finance Ph.D.) John Hussman made in October 2008:

An intolerable loss, in my view, is one that requires a heroic recovery simply to break even… a short-term loss of 20%, particularly after the market has become severely depressed, should not be at all intolerable to long-term investors because such losses are generally reversed in the first few months of an advance (or even a powerful bear market rally).

Once you know how much risk you’re willing to risk (whether it’s a 20% decline or some other threshold), you’ll want to find the optimal puts — the ones that will give you the level of protection you want at the lowest possible cost. That part can be a little complicated. Portfolio Armor was built to make it simpler.

With Portfolio Armor (available as a web app and an iOS app), you just enter the symbol of the stock or ETF you’re looking to hedge, the number of shares you own, and the maximum decline you’re willing to accept (your threshold), and then the app uses an algorithm developed by a finance Ph.D. candidate to scan for the optimal puts.

A couple of reasons (both of which we've mentioned here before) why this might be a good time to consider hedging:

Disclosure: I am long puts on DIA