I have CNBC on my tv in my office from where I trade everyday … I tend to 1/2 listen to what the talking heads say except when they break some news.  This morning I was again reminded of why I do this … Steve Liesman is an economics reporter not an economist.  He made that point very clear this morning when the talking heads were debating the merits of the S&P warning of the US treasury being put on a downgrade watch.

Liesman who is in the back pocket of the US Fed and their virtual talking puppet for running ideas up the proverbial flagpost stated (I am paraphrasing) … the US Treasury issues the debt and also prints the US currency, so there will never be a time when they can't repay their debt.  In essence, Steve is arguing that the US Treasury just has to turn on the printing press to pay their bills.

Is Steve really that stupid?  Of course you can print all the money you want Steve …. just don't expect the rest of the World to accept it when you try to go and pay for anything you need to import.

Keeping it simple Steve, since I live in Canada, I would suggest that Canadian Companies that export 200 million barrels of oil to the US every year be paid in Canadian $ not US $.  Ten years ago today the Cdn/US fx rate was $1.56 Cdn for every $1 US …. today it is $0.964 Cdn for every $1 US.

Keep your printing press working Steve, it cost you 40% more to buy that oil from us today not taking into account the rise in energy prices.  Probably even the Russian Lada auto you previously drove in your native USSR where you cut your economist reporter''s teeth probably costs more today in US$.  I forgot …. you drive a 700 series BMW …. oh wait that was made in Germany.  Face it Steve you're fucked.

Keep whistling past the grave yard Congress …. $14 trillion at a weighted cost of capital of 6% creates $840 Billion in annual interest costs.  That is $2710 per person in the US (based on 310 million).  You can reduce this amount by the % of government revenue that individuals pay in personal income taxes directly but then you also have to reduce it by the amount of individuals that pay no taxes.  All in all, the fat lady is getting warmed up even if Liesman and his Fed buddies don't want us to believe it.

I'm sure Slopers could chime in as to why, but the percentage gain by PSLV is about twice that of SLV in the same time period! Today alone, PSLV is up 3.47% as of this writing versus a mere 0.67% for SLV. Comments, anyone?

On Friday the VIX aka the Volatility Index closed at its lowest level since 2007, closing at $15.32.  Support for the VIX has been around $16.90-$15.60, since 2008 before the market tanked.  The most recent line in the sand is at $15.60, which was broken on Friday.  With the VIX measuring fear and the volatility in the market, this extremely low number in theory represents a complete lack of fear and complacency in the market, meaing very bullish sentiment.

Just looking at this VIX chart, one can see when VIX hit these levels it quickly bounced the next few days. Moving up to the 21 day ema.  The longest time it spent at this level was in late 2010 early 2011.

Here is a look at SPX with the VIX.  The last time VIX was near these levels, the market topped in May of 2010, right before Waddle & Redd killed the market with their order of sell 10 E-minis.  In addition it marked the December 2010-February 2011 short-term top.  But more importantly in early 2008 the VIX was near these levels, it was trading around the high $16's and this marked the 2008 top.

The biggest decline came just a year ago, the VIX broke below the $15.60 level and the market tanked for the next 2 months.  But looking at the chart we can anticpate a market that does not move anywhere for the next 1-5 day. But after that it will chose a direction, the biggest moves have been moves down. This table does not include, the drop from 2008, since the VIX never broke the $15.60 level.

Now a caveat to VIX being this low is that if it continues lower, it is possible there could be another bull leg. Notice when VIX broke the $15.60 in 2003, the market climbed and climbed.

To sum up, we have a VIX at a very low level and in the most recent past this has marked market tops.  The most significant market top was the 2008 high.  But VIXs continues lower it is possible to see a new leg up. But the edge seems to be pointing towards a move down.

I posted charts on TLT, copper, and EURUSD yesterday, pointing out that they were all testing important trendlines that, if broken, should indicate major trend changes. They all broke yesterday. I thought that TLT might be saved by the S&P announcement yesterday, but having pulled back below the trendline by the open, it broke up through it in the afternoon: 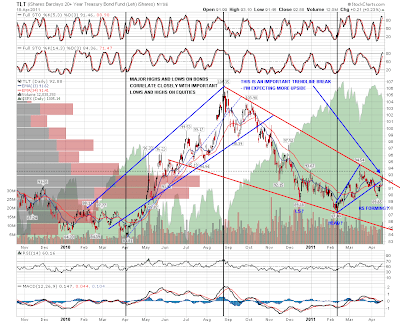 This should be followed by a big bond rally. It makes sense that we would see that here as the recent highs on 30 year treasuries tested the 26 year old declining channel and the trendline was rejected. That's a shame for the longer term bear case, as there could be no better way of bringing current US policies to a close than seeing interest rates set firmly on an upward path, but it is what it is: 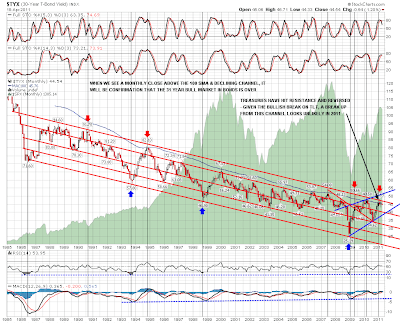 Copper broke down yesterday, and here's the daily chart showing what a significant break down this is. I have some support in the 410 and 400 areas but my main target is the 365 support level, which is also a potential H&S neckline if it's going to retrace further: The trio of major breaks yesterday was completed by EURUSD, which gapped below the support trendline on the rising wedge that has formed since the last low at 1.29 in early January. Harder to put a target on the EURUSD retracement, but the technical target is back to that January low, and as the wedge overthrew, this wedge is unlikely to turn into a rising channel: 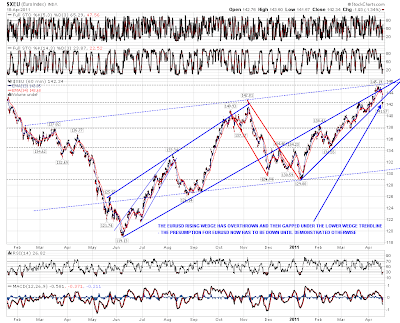 Taken together all of these breaks on bonds, copper and EURUSD augur badly for equities, with copper and bond yields particularly tending to track equities closely. My primary scenario is now that the February top on SPX was a major top and that it is now unlikely to be broken for a few months. We're also now coming into the seasonally weak May to November period of the year and this is a logical point to see a retracement on equities. Shorter term we still have two valid H&S patterns of the three that I posted yesterday morning, and they are the large IHS with the neckline at 1337, and the smaller H&S with the neckline at 1300. I'm taking the smaller H&S less seriously now as ES has broken back up over the neckline, though I'd only discount it altogether if ES gets back over 1315:

Equities are bouncing today and the logical targets on SPX are the 50 and 20 DMAs at 1315.25 and 1319.30 respectively. A break back above these with confidence would be bullish but until then they are the key resistance levels here: 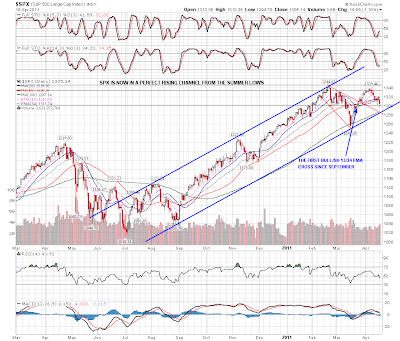 I posted my daily gold chart a couple of weeks ago showing the very strong resistance trendline at 1450 and saying that a break above it would be very bullish. Since then gold has broken that trendline, retested it and is now testing the 1500 level. I wouldn't put any money on 1500 holding: 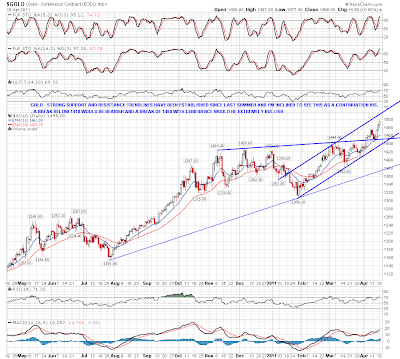 The bulls are on the back foot now and the technical picture favors the bears. The bulls still have the potential  IHS, but the odds on it playing out have worsened considerably.  The bears need a close below 1300 SPX and the bulls need to close back above 1320 SPX. I'm leaning towards seeing a bounce today but it may not get far.