At the time of writing ESM1 has reached the February high to the tick at 1337.75 and is testing it. We may well see a new high today. After having a careful look at the continuation IHS that has formed I've redrawn the neckline sloping upwards slightly, so that's slightly higher at 1339.5. The 60min RSI is overbought and showing negative divergence so we may well see some retracement today or Monday and the obvious target for that retracement would be broken resistance at 1319. Pug's called this move very well and is expecting a wave peak in the 1340 – 1344 area, followed by a retracement into 1324 SPX, so that would fit my expectation very well:

NQ has led the rally from the Monday lows and has risen an amazing 130 points since then. I have a possible rising channel with resistance in the 2395 area, which is slightly below the February high which was at 2402.5:

The dollar is crumbling badly as various currencies have broken up against it. That supports the bull case here which looks very powerful. EURUSD has now broken up through resistance with confidence and my next target is slightly over 1.50:

AUDUSD has also broken rising wedge resistance and my next target is in the 1.11 area. The target for the broadening formation that broke up in September last year has now been met, but there's no sign of a top for AUDUSD here:

Vix broke below the 15 support level that has held since mid-2007 and may drop quite a bit further if the break holds: 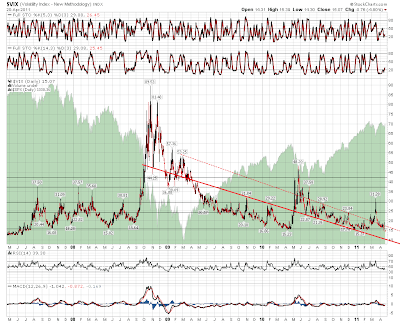 So all is well with the world. Equities and commodities are set to make strong new highs while the US dollar is being beaten to death with the Fed's printing press. There's something missing from the picture though, and that's a falling bond market and rising bond yields. Bond yields have been highly correlated with equities in this bull market and the consolation prize for bears from a big new wave up was always going to be a rise in bond yields that broke the 26 year declining channel on TYX. The top of that declining channel was tested in February, and bond yields then reversed with equities. So far though, the bond market is holding up and yields are still well below those February highs. I'm expecting that to change, and if it doesn't then a strong move up in equities here would diverge markedly from bonds. That channel resistance is solid however so we'll have to see how that goes: 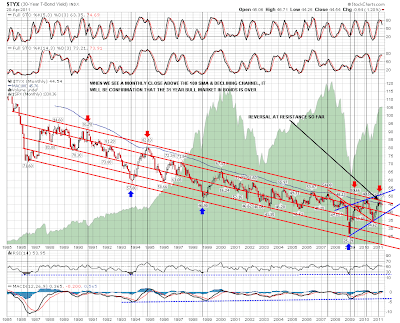 There are a couple of odd things about this rally up from the Monday lows so far. Bonds are holding up as I said, and the Russell 2000, the Transports index and Financials look weak. The bull case looks strong however after this amazing move up since Monday and I'm expecting that we'll just be buying the dip as usual once new highs on ES and NQ are made and confirmed. A couple of things to mention are the Easter holiday trading stats from the Stock Trader's Almanac, which are well worth noting. The trading day before Good Friday has been up on Nasdaq 14 of the last 16 times, and ten straight times since 2001. The post-holiday Monday however has worse stats, down 16 of the 20 between 1984 and 2003, though it has been up 6 of the last 7 since then. Thanks to Cobra for those stats on the Monday after Good Friday.

The move down on Monday with the confirming equity bearish trendline breaks on EURUSD, copper and bonds was just a particularly impressive bear trap it seems.  Many were fooled by it, including me, and there was a heartfelt post about it by a futures trader called Chris Johnston that echoed what many of us have been thinking this week. Definitely worth a read and thanks to my friend bullethead for posting the link for me.