I wrote a post on the last day of March noting that the last trading day of the month has been a one-day bear market since March 2009, with a cumulative loss of 72 points since then. Here are the stats: 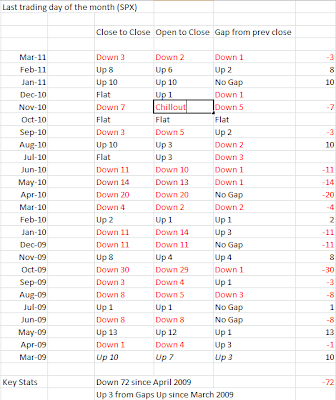 The short side is looking promising today, as the lower trendline of the rising wedge from the 1290s has broken down overnight. That's a pointer to what might be a significantly bearish day, as if the wedge turns into a channel then we could see a move down to 1330, though a retest of the big IHS neckline in the 1336-8 area looks more realistic:

I'm not getting excited yet though. The pinocchio down through the rising wedge lower trendline yesterday has set up a shorter term support trendline on ES. When that breaks the short side today will look a lot more interesting:

Copper is still testing support and failing to bounce there. Support's still holding though and even if copper resolves down here there are good odds for a spike back up to test triangle resistance first: 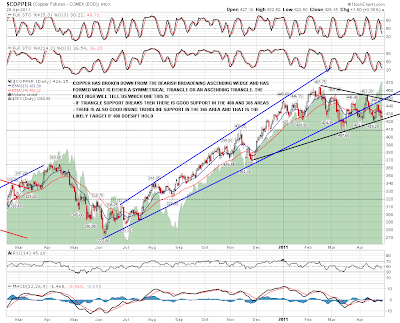 I don't know whether anyone shorted sugar on the basis of the chart I posted yesterday, but if anyone did they should be happy this morning. Sugar is nearing the key test to see whether it is in a falling wedge or declining channel. If that test is today then potential support is in the 22.6 area. If sugar breaks below there then the declining channel support trendline should be hit in the 19 – 19.3 area. That target could get a lot lower if that move down takes a few days as the trendline is declining very steeply:

My palladium trade is close to reaching the key initial target in the 791-3 area and I'll be cashing up there as we'll more than likely see some pullback from there. If it breaks the two trendlines there and clears 800 that would be extremely bullish and I'd be looking for a retest of the Feb highs in the 864 area. My ultimate target from the monthly chart is in the 900-950 area:

I haven't done a CADUSD chart in a while so I thought I'd post the CAD chart today. It has been lagging AUD lately but the weekly chart looks pretty bullish:

What I'm hoping to see today is a gap up, which the Gap Guy gives an 82% probability of closing, followed by a break of short term support on ES and then a decent retracement that retested the IHS neckline in the 1336-8 area. The stats for the first trading day of the month on Tuesday are very bullish (up 184 since April 2009) and the stats for the the second trading day of the month fairly bullish (up 72 since April 2009), so I'm leaning long for the first two days next week and the most likely day to see a neckline retest is definitely today. Looking at the stats for the first two trading days of the month, I see that if you'd gone long at the close of the previous day and then sold at the open on a gap down, and held until the end of each day on a flat or positive open, then you'd be up a cumulative 358 SPX points since April 2009. That's slightly more than half of all gains in this bull market on SPX which is frankly amazing. Helicopter Ben's speaking at 12.30 so we might see a spike up in precious metals and all non-US currencies then. 🙂