Last week, I mentioned that with volatility near two year lows, I'd been spending some time looking for speculative option buys. I noted that I'd been looking to place bullish and bearish bets, so I’d have a better shot at making some money whatever direction the market takes in the next several months.

As I mentioned last week, while doing this, I’ve been keeping in mind a few points Tim made in his book, “Chart Your Way to Profits.” On p.474, Tim offered a few common sense guidelines about speculative options buying:

I noted also that in addition to Tim's three guidelines, I'd added a fourth:

A quick recap on my M.O. with this: for the bearish bets, I’ve been starting by scanning for relatively lightly-traded (average daily volume over the last month of 150k-200k shares or less), optionable stocks that look weak technically and fundamentally. The idea behind looking for relatively thinly-traded stocks is that the options traded on them are more likely to be thinly-traded, which increases the chances that they might be inefficiently priced. Then I look for in-the-money puts on them several months out, and compare the current bid-ask prices for them with the estimated fair market value of them via the Black-Scholes model.

For the bullish bets, I’ve been doing the reverse: scanning for stocks that look strong technically and fundamentally, and looking for in-the-money calls priced below the Black-Scholes estimates of their fair market value.

I mentioned Thursday that I had placed limit orders for in-the-money calls on these five stocks: AEG, SVN, SUP, ASMI, and COHR.

And limit orders for in-the-money puts on these five stocks: CPIX, LOJN, HIL, PNCL, and MDS.

Unfortunately, I went 0-for-10 on those limit orders Thursday, but I repriced the options Thursday night, and put in small limit orders for options on 8 of those stocks for Friday. I didn't see the confirm until Monday, but it turns out I got a fill on my small limit order for calls on COHR. Checking the Black-Scholes value of those options now, and their bid-ask spread as of Monday, it looks like it may be possible to buy more of them Tuesday at a discount to their Black-Scholes fair market value estimate. More on that below, but first a quick reminder about the difference between speculative options buying and hedging.

If I were hedging, I would enter the symbol of the stock or ETF I was looking to hedge in the “symbol” field of Portfolio Armor (available on the web and as an Apple iOS app), enter the number of shares in the “shares owned” field, and then enter the maximum decline I was willing to risk in the “threshold” field. Then Portfolio Armor would use its algorithm to scan for the optimal puts to give me that level of protection at the lowest cost.

On rare occasions (I’ve seen it happen once, so far) the optimal puts Portfolio Armor presents might be in-the-money; in most cases though, they will be out-of-the-money. Since I’m making a directional bet in the case below, though, and not hedging, I placed a limit order on slightly in-the-money options. This makes sense for directional bets (when you are willing to pay more to reduce the odds against your bet) but would be sub-optimal in most cases for hedging (when you want to get a certain level of protection at the lowest possible cost).

Short Screen shows an Altman Z-Score of 6.48 for COHR (scores above 3 indicate financial strength according to the model).

One caution: COHR's earnings call is scheduled for Tuesday after the close.

I've been looking over a lot of charts this morning and have been considering the case for a major top at last week's highs. It seems too early still, but there's no doubt that a number of significant trendlines were hit, both long and short term, and the high wasn't far from the 78.6% fib retracement of the bear market in the 1380 area. On a trendline basis SPX has made a fourth touch of what now looks like a very significant rising resistance trendline.   We'll have to see, but until SPX breaks that trendline with some confidence this is a higher risk area for longs, and we're now in the traditionally weaker May to October period of course: 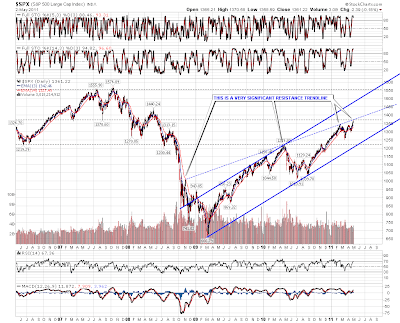 Shorter term on the SPX 60min chart an obvious shorter term reversal area was also hit, with the obvious reversal targets at the retest of the IHS neckline at 1343ish, or rising (possible rising wedge) support in the 1320 – 1330 area: 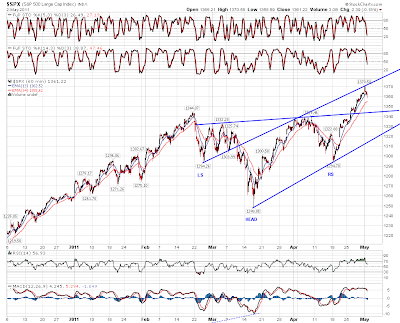 On the Nasdaq an obvious rising channel resistance trendline was also hit. The IHS on NDX is downsloping, so a retest would require a larger drop to the 2340 area if we were to see that retested: 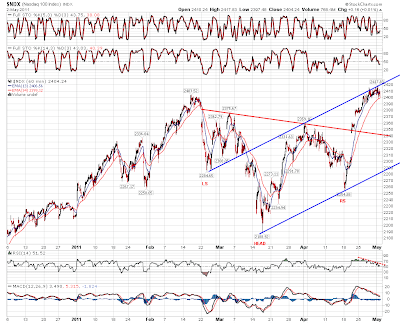 Looking at the Russell 2000 on a longer one year timescale it too has made a fourth touch at a now very significant looking resistance trendline: 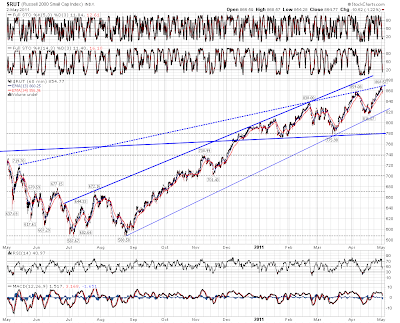 A number of the traditional indicators have already reversed of course. Bonds made what increasingly looks like a major low at the end of January, and show no sign of reversing back down. Copper too made a major high in January, and the obvious target now is major support in the 365 area, though there's still decent support in the 407.6 area: 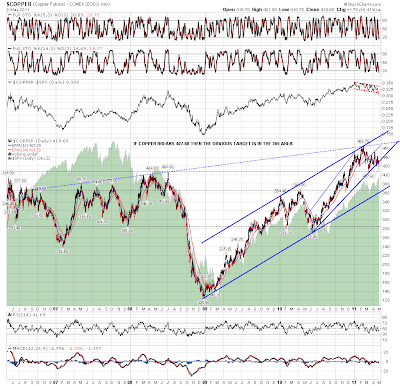 I was looking at the Vix chart this morning and there's a possible double-bottom in the 14.3 area there. The island top indicating to 14.7 has already played out to target. Island tops are poor performers unless the top is high and narrow and this one is a classic example of one of those. Short term, we could see a significant reversal back up on Vix here: 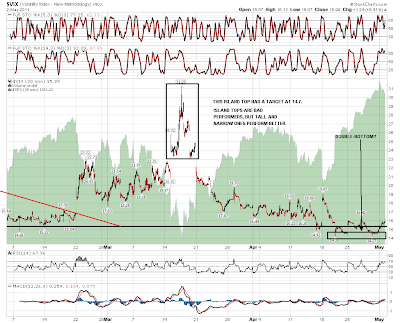 On precious metals there's also a good case for a short term top here. On my gold monthly chart gold broke long term resistance, which opens the way to big further moves up in the future. Short term however gold hit the upper trendline of the rising channel from the November 2008 lows, and a retracement to channel support looks likely. There's excellent support in the 1430 area so that might well be hit with channel support in a couple of months: 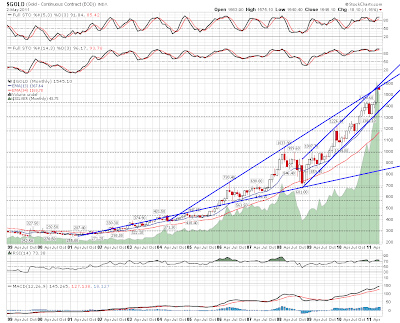 Short term I'm looking mainly at the IHS on SPX for direction here. If the neckline holds then the bull case on SPX here still looks healthy, but if it breaks I'd be inclined to write the IHS off and rely on the other patterns and channels on SPX and NDX. It's a continuation IHS in any case, so I'd give the pattern less weight than a classical reversal IHS. IHS neckline support on SPX is in the 1343 area and rising wedge support is in the 1320 area if the neckline is broken.