Over the long haul, that ratio pretty much holds, but on occasion, the ratio gets really screwy. I noticed this last week, and I decided to take it upon myself to analyze the correlation between the SLV and ZSL instruments.

From 613 observations, there was a correlation of -1.98, which is pretty much what ZSL's makers intended. But if you look at the data series, you can see how many outliers they are, which could be devastating to anyone who expects a steady -2 correlation (which is the horizontal red line). Keep this in mind when thinking of ZSL. My takeaway is simply: if you want to be "ultrashort" silver, then just short twice as much SLV as you normally would!

ES broke the rising support trendline from the March lows overnight and the outlook is starting to look very bearish. All of the main indices are coming off slightly from oversold on the 60min charts, but I think we're back to selling the rips for the time being:

NQ has broken the support trendline that had been holding in recent days and the obvious next target is rising support from the March lows in the 2305-10 area:

I won't post a chart for TF today as I'm really struggling to get a usable trendline out of it. Instead I'll post the Transports chart where there's a nice looking rising wedge that closed at support on Friday. It looks likely to break down at the open and the obvious target from the Transports, as with SPX, is now a test of the March lows: 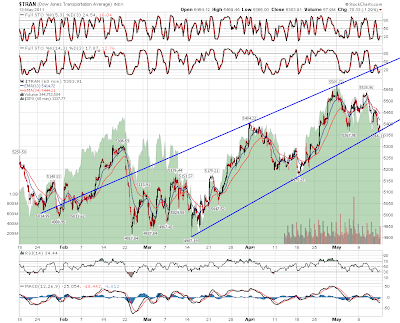 The copper decline from the Feb high had seemed rather shapeless so far, but I now have a rising channel that captures most of the decline so far. I'm looking for the next move down on copper to start after a touch of the upper trendline of the declining channel, and I'll be happier with the channel after that third touch:

The outlook for USD is looking increasingly good as EURUSD broke the support trendline I posted on Friday. The obvious next move is to rising support from last summer in the 1.35-6 area:

That EURUSD support break has been mirrored by other major currencies. GBPUSD has broken down from a shorter term rising channel from Dec/Jan. GBPUSD looks due for a bounce here and I'm expecting a retest of broken support:

AUDUSD, like EURUSD, has broken back down through a very significant support level. It seems clear that we are going to see a strong bounce from USD now. AUDUSD could fall back into the 90s from here and I'm going to look at charts on various timeframes to try to establish likely targets. Main support on this chart is obviously in the 94-5 area, but that seems overambitious:

I'm leaning towards an oversold bounce today. but after some key support breaks it may obviously go the other way. USD looks ready to retrace a bit however and I'm expecting copper to hold up a little longer so a bounce is definitely on the cards. The Stock Trader's Almanac tells me that the Monday before May expiration has been up on the Dow 19 times of the last 22. On the other hand eight of the last ten Mondays have been down on SPX so we'll see.