When Borders filed for Chapter 11 bankruptcy protection in February, I started thinking about the dynamic: two or three competitors, with tight (or tightening) margins, struggling for survival in a crummy economy.  Essentially, I’m looking for specific weakness and betting against whoever I think will most likely die.

The retail office product space looks to fit well into this model.  Staples (SPLS), Office Depot (ODP) and OfficeMax (OMX) all took a severe beating in the 2008 drop.

They survived, but performance was poor compared to the S&P.

Since I have a Staples and an Office Depot in town, I actually investigated both stores.  Been to Staples a bunch of times for the usual stuff, but I was more interested in the competition.  I have one word for Office Depot: grim.  Product selection appeared significantly more limited and some of what was there was actually dusty; all with the help from a staff energized like they’re expecting either a reduction-in-force or a physical beating at any minute; so I went short ODP in March.

If I was inclined to put on a pairs trade, it would be long Staples and short Office Depot.  Good thing I was waiting for earnings to come out before going long Staples- as of yesterday, they reported much lower-than-expected quarterly earnings and slashed its full-year forecast, sending shares in the world's largest office supplies retailer down the most in a day in 11 years and renewing talk of consolidation (Staples shares fall after profit outlook cut).  As expected, Staples got hit for -15%, OfficeMax for -7.7% and Office Depot for -5.45%.  I feel a little better putting the 2nd half of the pairs trade on sometime over the next few weeks- at a much lower price.

Today, Oppenheimer cut its rating on Staples and OfficeMax to "perform" from "outperform," saying sales trends for office supplies retailers appear unlikely to rebound any time soon.  (Note: I think Office Depot wasn’t mentioned as they are already rated “perform” on 10/25/2010).

Over the long haul, chances are Staples will be a (the?) survivor and I see Office Depot as the weakest of the three with the greatest fundamental challenges.

For you Apple (AAPL) devotees, and I consider myself among the faithful, my near-term work argues that the correction of the late-April upleg from 320.16 to 360.90 ended (finally) on Tuesday at 330.75.

Only a decline that breaks 330.75 will invalidate my current outlook, and will point AAPL towards a full-fledged revisit of the April 18 low at 320.16.

Well, this is just going to encourage them, isn't it?

LinkedIn came public today and has more than doubled in price from its already jacked-up offering (meaning that the company kind of got ripped off, since the public was willing to pay far more for the shares than their bank paid LinkedIn). In any event, this kind of eye-popping event is just going to increase the hype around Groupon, Zynga, and – the biggest of the Big Kahunas of them all – Facebook.

It'll be nice once all these IPOs are behind us, since the public appetite for these things is bound to keep things elevated until it's all over, particularly Facebook. It'll probably be a year before all these household names are publicly traded, though.

Congratulations to Reid Hoffman and his team for putting together a very cool company and a very successful IPO.

That was a nice move up yesterday, but before the bulls can break out the champagne there's still the matter of declining resistance from the highs that needs to be broken. On the ES 60min chart that's the upper trendline of a bullish falling wedge, and we've already hit resistance. The oversold 60min RSI with some negative divergence suggest that may hold today. There's a possible upsloping IHS forming on the chart where making the right shoulder would involve a retracement to the 1326-1332 area:

There's another falling wedge, somewhat sloppier, on the TF chart, and there's another possible IHS forming there with a possible retracement to the 830 area to make the right shoulder:

There were a couple of big gaps up on NDX recently, and the gap zones have been the key support areas for the subsequent move down. The lower gap zone held the last move down and the NDX high yesterday was back in the upper gap zone. This is logical area to see some retracement: 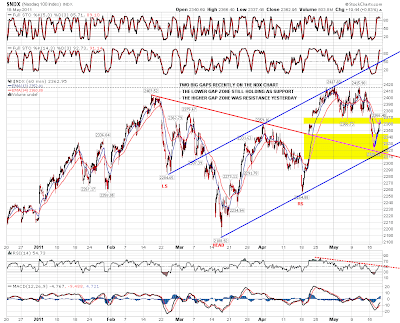 I've been asked a few times this week whether the USD rally impacts my view on equities and it does, but only marginally. The last five months of the equities wave up into April 2010 were in the face of a rallying dollar, and while a falling dollar helps equities rise, a rising dollar won't make equities fall. I'm expecting more upside on USD. Short term though, EURUSD looks likely to rally a bit more:

The risk with these falling wedges on ES and TF is that we see a move to test wedge support which would necessarily make new lows for the week. That would cause significant technical damage and I think that's unlikely but it's something to bear in mind. There were some good reasons to see a solid low at the bottom this week and one of the most compelling charts to see that is the Nasdaq Composite ($COMPQ), which I don't usually follow much as I prefer NDX. On COMPQ the low was a perfect bounce at channel support from the summer lows last year: 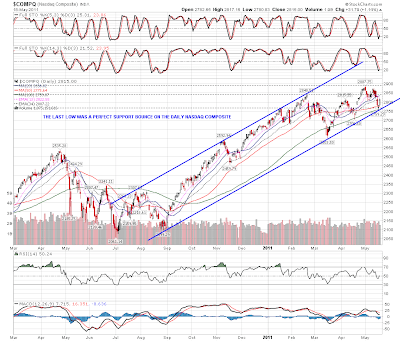 I was looking at the FTSE this morning. Stockcharts has just added support for a lot of UK and european equities and I'll be watching those markets more in the future as a result. The FTSE looks interesting at the moment, with a possible continuation IHS forming on the daily chart that could take FTSE back close to the 2007 highs: 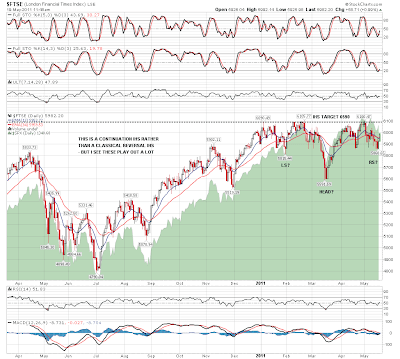 One difficulty with continuation IHSes though is that there's often little to distinguish them from double or triple tops. Looking at the broader view on the 5 year weekly chart, the similarity between the current setup and the FTSE top in 2007 is very striking. Not a long trade to to taken before there is a new high with some confidence really: 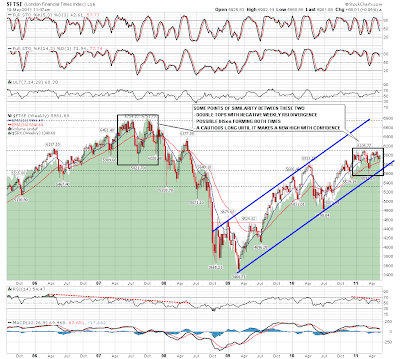 I'm leaning towards seeing some retracement today on balance, though a break up with confidence through declining resistance on TF and ES might change that. I'm expecting those trendlines to be broken in the next few days, and that would be the signal to expect new highs, but I'd be surprised to see that today.