On May 5th, I said it was time to short Japan. Looks like that's worked out so far. Predictions Pay.

I love it when a plan comes together. (Predictions Pay! – Editor) My call for 1313 ES and 2310 – 2315 on NQ looked pretty bold on Friday morning but we've made 1312.25 ES and 2316.50 NQ overnight. An exact support trendline hit on both would be slightly lower at 1311.75 ES and 2315 NQ, but it could be that we've seen the lows on both. On ES the support is the lower trendline of a big falling wedge, and it's very important to note that this is a bullish pattern that breaks up 70% of the time, and that the target is the last ES high:

The NQ chart is apparently in direct opposition to the ES chart, as there's a broadening ascending wedge on the chart and these break down 77% of the time. There's no reason for conflict here though, as the NQ pattern is a much larger pattern. The ES falling wedge could play out to new highs on ES (and NQ) while NQ makes another upside hit with a target in the 2500 area before breaking down. I don't know if it will happen that way but it would be a beautiful long setup here and short setup at new highs so I'm hoping it does:

The setup on TF is more speculative, but it looks as though a large H&S may be forming there. If the neckline can hold today, then I'd expect a bounce into the 850-60 area before turning down again. That's very speculative at this stage, but there's decent support in the 810-4 area, and if ES and NQ bounce at support today then that's the likely target area on TF:

EURUSD has moved down very sharply since I posted the broken rising wedge there on Friday morning, and is now well below the wedge target. I won't post that chart this morning, but I will post the DX chart, where there's a very interesting looking IHS that has now broken up with a target at 79.3. This is a potentially very important development, as the declining resistance trendline from the June 2010 high is currently at 77.25. If DX can break up through that trendline then it opens up more upside for USD:

Copper was bullishly divergent on Friday, but broke down from another perfect rising wedge there overnight. I'm a bit more doubtful about this one. The ES and EURUSD rising wedges have already played out to target and ES and NQ are now very close to main current support. As we saw on Friday though, ES and copper can trend in opposite directions short term and it may be that copper will make the 385.25 target. There's decent support at 395 on the way down though and that might hold:

I don't have a good short term read on silver at the moment, but I'm looking at a rising support trendline in the 33.8 area if it retraces further:

I'm not expecting silver to make a new low in the short term. It has hit a key support trendline that should hold for the moment, though we might well see further downside in the next few months: 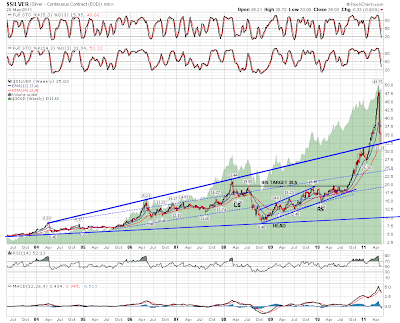 I'm looking at the current area as a long setup for what could well be a major rally over the next few weeks to new highs on ES and NQ, followed by a possibly amazing short setup at those new highs for a summer pullback. I'm watching those support trendlines on ES and NQ carefully though. If they break then we might well see a retest of the March lows on both.