The title today is a little play on words that probably means more in the UK than the US, as in the UK 'top' is a slang word for kill. It now looks as though the SPX high that followed the Osama Bin Laden's long overdue promotion to martyrhood might last a while, as my support for my ES falling wedge failed overnight and a lot of technical damage had been done already yesterday during normal trading hours. Nowhere is that technical damage more evident than on EEM, where the rising support trendline from the bear market lows has now been broken: 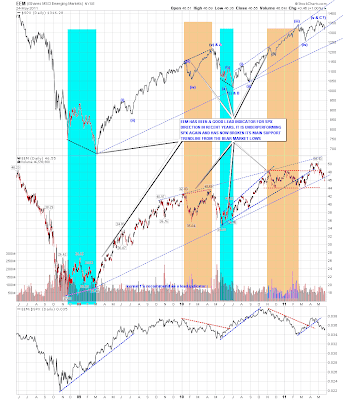 SPX has now closed below the support trendline from the summer lows last year. That is serious technical damage and more downside looks very likely: 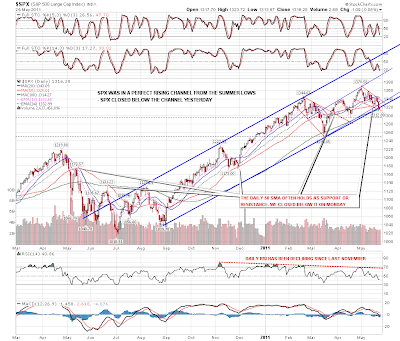 On the SPX 60min chart there is a strong support trendline that hasn't broken yet. I'll be watching that carefully today, and if it breaks down, then the obvious next target is at 1294.70, where there is a potential H&S neckline and the potential to make an intermediate lower low: 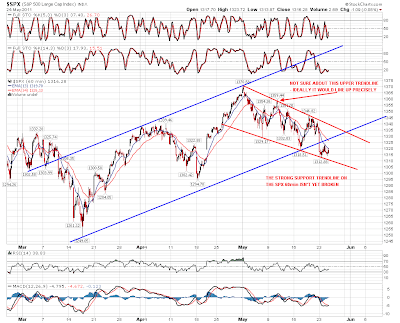 On the NDX daily chart support was also broken yesterday, though there is a possible alternate channel support trendline just below that hasn't broken yet: 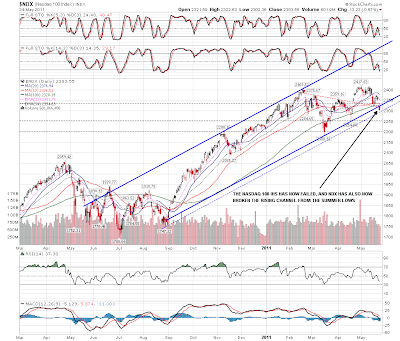 On the NDX 60min chart there's a decent support trendline established and that hasn't broken yet either. If it breaks today then the obvious target is 2254.88 where there is a potential H&S neckline and the potential to make an intermediate lower low: 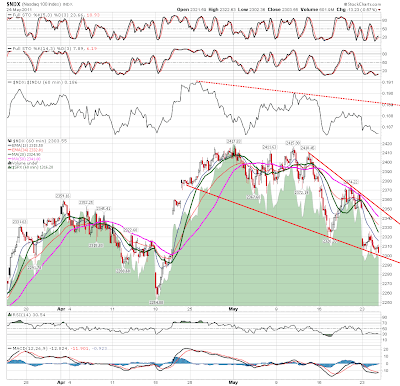 On the RUT daily chart support was broken a few days ago, and was retested late last week, though as with NDX there is a possible alternate channel support trendline just below that hasn't broken yet. As with NDX that's a long shot to hold here but it's in the mix: 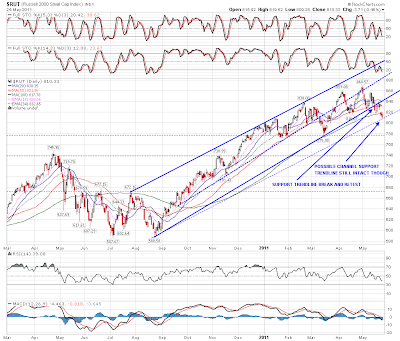 On the RUT 60min chart there's another decent support trendline that also hasn't been broken yet.   If it breaks today then the obvious next target is 775.90, though unlike SPX and NDX RUT has already made an intermediate lower low and is therefore technically in an intermediate downtrend: 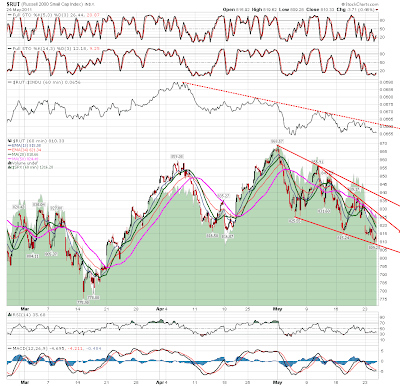 On copper I showed a little IHS yesterday morning that played out to the 409 target. Copper isn't looking bearish at all here in the short term as it broke my short term resistance trendline and I'm looking for a retest of the mushy resistance zone around 412 and a possible broken wedge support retest in the 415-6 area. That said the 60min RSI is now in the oversold area and a move up from here would kill off the possible H&S forming above the 395 neckline so we'll see:

My main bull scenario looks DOA this morning with the break down from the ES falling wedge overnight. That could technically be an overthrow, but I'm very doubtful about that. The key for today is whether we can repeat any of that overnight action during trading hours today and also break the short term support trendlines on SPX, NDX and RUT. If we can I'm seeing some trendline support on ES in the 1299 area that might prevent us reaching 1293 today, but we could hit it tomorrow within that trendline. There is something to also consider here though, and that is the SPX daily BB breaks chart that I posted yesterday. That likely strong rally dangled in front of the bulls like a promise yesterday, and it's hanging above the heads of the bears like a threat today.

The ideal scenario here is that SPX moves down to hit 1294.70 or slightly below today or tomorrow, and then we see that strong bounce as the right shoulder forms on a large H&S at a 1294.70 neckline. If we can stay below yesterday's range today that's what I'll be looking for today or tomorrow.

It's been a long time since I've been able to say this, but the bearish case is getting stronger by the way. Just take a look at the NQ chart as an example:

+ The red circle shows where, in the second half of February, the market snapped below a wedge and struggled to cling to that wedge (merely affirming its importance);

+ The green tint shows the last opportunity the bulls had to run with the baton, and they completely failed to do so…….what with the troublesome reality and facts and so forth;

+ The blue circle shows the most recent trendline failure, indicating a continuation of the waterfall down we're seeing.

In the end, though, all of humanity will be saved from itself. Why? Two words: Zynga IPO. After all, if a company whose sole purpose is to let imaginary farmers and imaginary city-dwellers run around in imaginary farms and cities can't save us……..what can? I can't imagine.