On most trading days, I go through all of my charts, which number over 1,000. I can do this rather quickly, but it's mind-numbing work, and it's nice to have something interesting playing in the background. Even a movie.

One movie which is totally enjoyable just by listening to it (since my eyes are fixed on ProphetCharts) is My Dinner with Andre, which is available (in 12 segments!) via YouTube. I offer you, on this ungodly boring day, the first part below. If you like it, you can just keep clicking the subsequent parts and enjoy the whole thing in the background.

Mixed picture this morning and I'm very torn here about direction both today and for the next few weeks. We need to hit some confirmation levels either way. On the ES 60min chart the break down on Tuesday night could have been an overthrow. We need to see what happens at declining resistance, currently in the 1336 area, if that is reached, and that is my main bull/bear line in the sand here. Having said that, when a wedge breaks you often see a break back into the wedge, and that retracement will generally NOT reach the upper wedge trendline. If the ES falling wedge is breaking down therefore, there is no reason to expect that declining resistance would be tested again:

On the bull side I posted possible rising channel support trendlines for NDX and RUT yesterday, and here's how they look this morning. Here's the RUT daily chart: 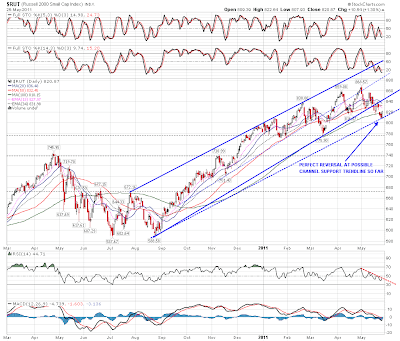 On the RUT 60min chart the move up has reached a gap resistance zone and it could reverse here: 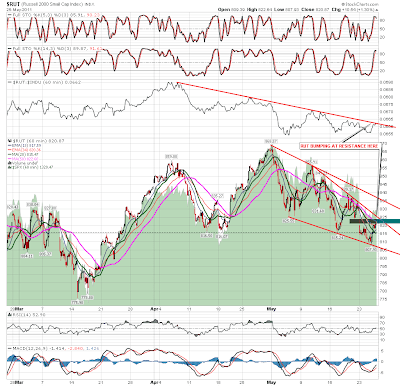 NDX hadn't quite reached my possible channel support trendline when I posted it yesterday, but it opened at the trendline and moved up from there, giving us exact hits on those previous theoretical trendlines on both RUT and NDX. That is something to think about and until we see those trendlines break that looks guardedly bullish: 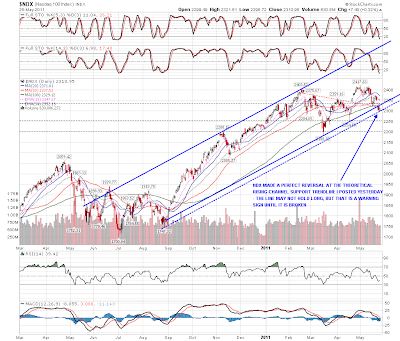 On the NQ chart, which is still very weak and not leading any bounce here, we have reached a retest level for two trendlines and both have been touched yesterday and overnight. A break up through them would suggest more upside, but this is an obvious reversal level unless those are broken:

There are a number of reasons I've given above for thinking that this is an obvious reversal zone, if we are to see more downside. There are more though, and another comes from silver. I've marked the gap resistance zones on the SLV 60min chart and you can see that the last SLV bounce failed at a gap resistance zone. SI (silver futures) have hit the 38 target I gave the other day and reversed slightly above in a gap resistance zone created on the last move down. You can see that the combination of the two zones gives formidable resistance for silver here. The lower blue trendline on the chart is equally formidable support: 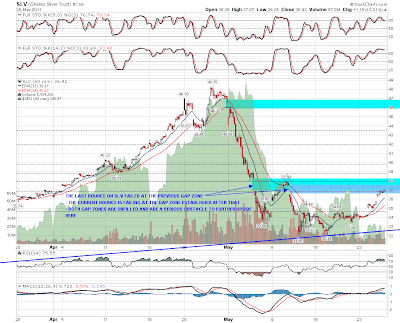 I posted a possible EURUSD declining channel last week showing an theoretical upper trendline that I was expecting to be resistance if we are to see more downside on EURUSD. The small rising wedge then broke down before we reached that trendline but EURUSD has rallied off the last low to reach it overnight. This is an important level, and if it is broken, then I would expect a move to the possible IHS trendline at 1.434, which has been the level for the last two highs. A reversal there would target the 1.414 area for a right shoulder to form. That would look ominously bullish and the best bear scenario sees a reversal on EURUSD here for obvious reasons. :

For my last chart today I thought I'd post the 60min chart for the Transports index, mainly because it's pleasing to the eye and there's a nicely formed declining channel on it. The obvious next channel touch would obviously be a touch of the lower channel trendline of course: 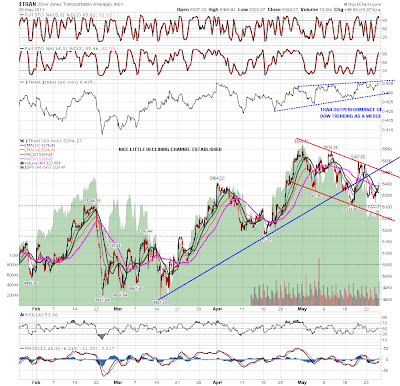 I'm waiting for direction here and we'll see what happens today. I'm very busy offline so apart from my morning posts I'll be occupied elsewhere most of the rest of the week & only taking trades if they look particularly inviting.

In previous posts, I've mentioned a few guidelines I've been keeping in mind when making speculative options buys (the first three of which are mentioned in Tim's book, Chart Your Way to Profits):

I've been making bullish and bearish bets to increase the chances that some bets will make money whatever direction the market takes over the next several months. I've also been trying to take advantage of relatively low volatility when buying options.

On Tuesday night I placed limit orders for a few small bullish and bearish bets. I got a fill on one of the bearish bets Wednesday, puts on BCRX. More on that below. First, a recap of my M.O. here, and a reminder about the difference between speculative options buying and hedging.

For the bearish bets, I’ve been starting by scanning for relatively lightly-traded (average daily volume over the last month of < 250k shares), optionable stocks that look weak technically and fundamentally. The idea behind looking for relatively thinly-traded stocks is that the options traded on them are more likely to be thinly-traded, which increases the chances that they might be inefficiently priced. Then I look for in-the-money puts on them several months out, and compare the current bid-ask prices for them with the estimated fair market value of them via the Black-Scholes model.

For the bullish bets, I’ve been doing the reverse: Scanning for stocks that look strong technically and fundamentally, and looking for in-the-money calls priced below the Black-Scholes estimates of their fair market value.

Prior to today, I used this M.O. to purchase puts on JOE, NAK, MOTR, TNDM; and calls on HMC, HIT, COHR, SUP, and ASMI. I noted these purchases (and sales, in the case of HMC, HIT, and MOTR) at the time on the Short Screen message boards.

If I were hedging, I would enter the symbol of the stock or ETF I was looking to hedge in the “symbol” field of Portfolio Armor (available as a web app and as an Apple iOS app), enter the number of shares in the “shares owned” field, and then enter the maximum decline I was willing to risk in the “threshold” field. Then Portfolio Armor would use its algorithm to scan for the optimal puts to give me that level of protection at the lowest cost.

On rare occasions (I’ve seen it happen once, so far) the optimal puts Portfolio Armor presents might be in-the-money; in most cases however they will be out-of-the-money. Since I’m making a directional bet in the cases below, though, and not hedging, I bought slightly in-the-money options. This makes sense for directional bets (when you are willing to pay more to reduce the odds against your bet) but would be sub-optimal in most cases for hedging (when you want to get a certain level of protection at the lowest possible cost). If you'd like to read more about hedging, you may want to check out my latest article on it, "How not to insure a stock portfolio".

Biocryst Pharmaceuticals, Inc. (BCRX) is a biotech company that develops small molecule drugs for the treatment of cancer, viral infections, and autoimmune diseases. As I've mentioned before, these are the kinds of stocks I generally prefer to bet against with puts rather than by shorting them, because they can spike on news of an FDA approval, or a partnership deal with a big pharma company.

Short Screen shows an Altman Z-Score of 0.86 for BCRX (recall that scores of 1.8 and lower indicate financial distress, according to the model).

I got a fill on a few of the $4 strike December puts on BCRX Wednesday.