Declining resistance on NQ is already being tested, with another small IHS targeting 2366. Strong resistance, and a potential larger IHS neckline is in the 2370 area.

Declining resistance was broken overnight on TF, though the trendline wasn't as strong as the ES equivalent. Another little IHS is targeting the 844 area, though there's a resistance area on the way at 839:

EURUSD broke up through the potential channel resistance trendline I posted yesterday morning and the obvious target is now 1.434 for another potential IHS neckline.

Copper has broken the resistance levels at 412 and 416 I posted the other day. there's some possible resistance at 419, but otherwise I'm seeing the next likely target at 426.8:

Bonds tend to move inversely to equities, so I thought I'd have a look at the TLT chart this morning. Sure enough, TLT is making a double top with negative RSI divergence at rising channel resistance. A fall to the 91-2 area looks likely next, which would be bullish for equities. It's worth noting on this chart that the last channel high on this TLT chart was just before the March low on equities: 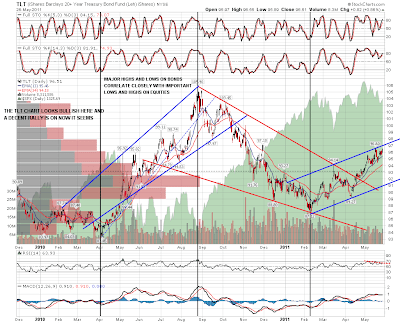 Not much for the bears here so far but I do have one ray of hope for the bears to show this morning and that's a possible H&S pattern forming on SPX that vandalay pointed out to me the other day. I'm not sure what I'd give for its chances here but the neckline trendline is undoubtedly perfect: 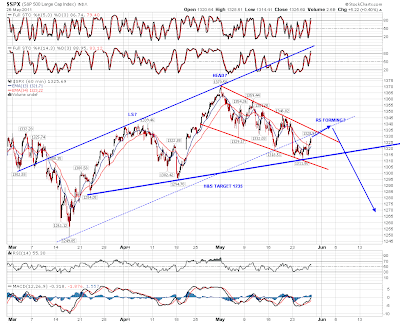 I'm leaning bullish here but we could see some retracement today. If so, I have short term rising support on ES at 1318.5. Today will be a low volume pre-holiday day, which probably favors the bulls. Tuesday will be the last trading day of the month, which is distinctly bearish statistically. It might be that a bullish breakout might wait until Wednesday.

In my post Thursday, I mentioned a few guidelines I've been keeping in mind when making speculative options buys (the first three of which are mentioned in Tim's book, Chart Your Way to Profits):

On Thursday night I was going through some screens, and came across a stock I'd already bought puts on a couple of weeks ago — OMER. I had bought the $7.50 strike November puts on it, but it looks like you'd be able to buy the $5 strike November puts on it for a discount to the Black-Scholes estimate of their fair market value today (Friday). More on that below, but first a recap of how I've been looking for these speculative options buys, and a reminder about the difference between speculative options buying and hedging.

For the bearish bets, I’ve been starting by scanning for relatively lightly-traded (average daily volume over the last month of < 250k shares), optionable stocks that look weak technically and fundamentally. The idea behind looking for relatively thinly-traded stocks is that the options traded on them are more likely to be thinly-traded, which increases the chances that they might be inefficiently priced. Then I look for in-the-money puts on them several months out, and compare the current bid-ask prices for them with the estimated fair market value of them via the Black-Scholes model.

For the bullish bets, I’ve been doing the reverse: Scanning for stocks that look strong technically and fundamentally, and looking for in-the-money calls priced below the Black-Scholes estimates of their fair market value.

Prior to today, I used this M.O. to purchase puts on JOE, NAK, MOTR, TNDM; and calls on HMC, HIT, COHR, SUP, and ASMI. I noted these purchases (and sales, in the case of HMC, HIT, and MOTR) at the time on the Short Screen message boards.

If I were hedging, I would enter the symbol of the stock or ETF I was looking to hedge in the “symbol” field of Portfolio Armor (available as a web app and as an Apple iOS app), enter the number of shares in the “shares owned” field, and then enter the maximum decline I was willing to risk in the “threshold” field. Then Portfolio Armor would use its algorithm to scan for the optimal puts to give me that level of protection at the lowest cost.

On rare occasions (I’ve seen it happen once, so far) the optimal puts Portfolio Armor presents might be in-the-money; in most cases however they will be out-of-the-money. Since I was making a directional bet with OMER, and not hedging, I bought slightly in-the-money options. This makes sense for directional bets (when you are willing to pay more to reduce the odds against your bet) but would be sub-optimal in most cases for hedging (when you want to get a certain level of protection at the lowest possible cost).

Omeros Corporation (OMER) is a clinical-stage biopharmaceutical company. As I've mentioned before, these are the kinds of stocks I generally prefer to bet against with puts rather than by shorting them, because they can spike on news of an FDA approval, or a partnership deal with a big pharma company.

OMER has a PEG ratio of -0.4 based on analysts' estimates of its (negative, expected) earnings over the next five years.

I picked up the $7.50 strike November puts on OMER a couple of weeks ago, because OMER was trading above $5 and I wanted to get in-the-money puts (there were no strike prices between $5 and $7.50). OMER closed at $4.69 Thursday though, so the $5 strike puts are now in the money.