I'm still doubtful about this move up, mainly because I'm skeptical about seeing a powerful new wave up in the absence of more QE. That's something we haven't yet seen in this current bull market and while it could happen, as I said I'm still somewhat skeptical. However today I am going to suspend my disbelief, and argue the bull case here purely from the technical perspective.

First off I'll quickly show where equities are on the 15min charts. The SPX rising channel had already broken down before I did my post yesterday of course, and the rectangle that was forming has evolved into a little IHS that would have a target in the 1350 area. That pattern isn't fully formed yet of course: 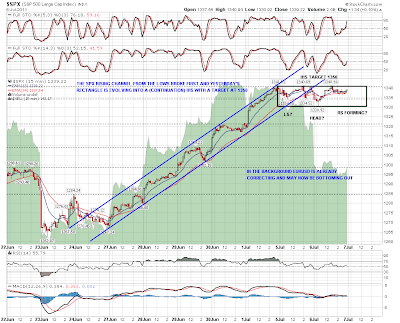 On NDX the rising wedge / channel broke yesterday and a little broadening ascending wedge has formed as NDX has continued to inch upwards. The target for that bearish wedge in the 2355 area might well  be a decent retracement target as and when NDX breaks downwards: 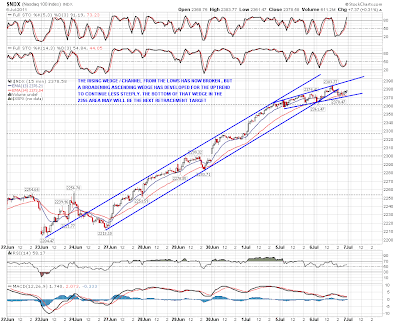 On RUT the rising wedge / channel also broke down yesterday and another broadening ascending wedge is forming: 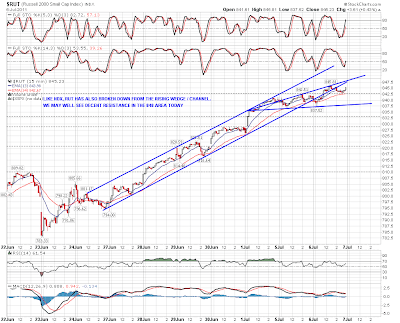 On to the bull case then. Obviously I was expecting some retracement in a number of areas this week and we haven't seen that retracement on equities. However we have seen it on EURUSD and ZB (30yr treasuries). On EURUSD my chart is already somewhat out of date as EURUSD has now broken down to the 1.425 level through the support level it seemed to be bottoming at. However it has now retraced over two thirds of last week's powerful move up, and unless it is on the way to a new low, then there isn't a great deal further it can go while remaining a retracement. EURUSD and equities moved together strongly last week, and equities have merely consolidated while EURUSD has retraced. In the last two years that combination has been characteristic of a strong bullish wave up on equities:

30 year treasuries also moved strongly (inversely) with equities last week, and has been retracing since making a short term low on Friday. Since then the retracement has peaked at a strong resistance level and a strong rising support trendline has formed, which has broken down while I've been writing this. This would be a typical start for a big new move down, which would normally accompany a move up on equities:

Silver is more loosely linked to equities of course, but always worth watching regardless. Somewhat to my surprise silver has broken back up through the broken support trendline from last August, and has now broken up through my secondary target. Looking at that in more detail on the 60min chart, the declining channel from the daily chart is actually a falling wedge, which overthrew slightly at the low and has now broken up with a target at 38.78, not far below serious gap resistance in the 40 area. The rise has stalled for the moment at a potential declining channel upper trendline, but after the overthrow through the lower channel trendline the odds of that resistance holding long are considerably lower. The pattern setup for silver therefore looks strongly short term bullish here, which again fits with bullish equities:

There's also been quite a bit of talk about a reversal here as part of the formation of cup and handle patterns on ES and TF. NQ has overshot the target already. There are some issues with this and they are as follows. There would be no uptrend leading into the cup, which is a problem, and the cup would have two handles, one on each side, which would make it more of an IHS. There may be a cup forming, but if so then the obvious reversal would be at the 2011 highs, which would deliver the uptrends into the pattern, and get rid of the surplus handle on the other side. Once ES and NQ break the February highs therefore, the natural targets are the 2011 highs, and we might not see a retracement worthy of the name before we get there. I've marked up the ES 60min chart with my analysis of this possible setup and my pattern data as usual comes from Bulkowski's outstanding reference site which you can find here:

Given that oil and copper have also broken up, the outlook for equities on an intermarket basis is therefore looking fairly bullish across the board if EURUSD turns, which admittedly it is showing no sign of doing at the time of writing. I'm increasingly doubtful about seeing a retracement on equities here. If we are to see one before we retest the 2011 highs, we should see it at the retest of the February highs.

Well, the notion that markets fall faster than they rise seems to have been turned on its head. The downturn, spanning May 3 to June 27, has been completely undone in just over a week. There's a bit of a line – and only a bit – at 1352.75. This morning's fairly positive job claims number only goosed things further.