I present below Slope's patron saint (blessed be his name) with one of his most brilliant pieces. Genius is never understood in its own time. It's long, so fire it up, look at your charts, and be enlightened.

Although I already took a profit on it as a day trade, I bought TLT earlier today since it was smashed pretty hard (understandably!) This sucker pays a 4.34% dividend and – assuming the US doesn't default permanently – looks poised for a push higher.

The big news this week is the talks to increase the US debt ceiling. Officially the deadline is August 2nd, but I've seen credible estimates that could extend that by a week or so. What's interesting here is the degree to which both sides have a significant incentive to wreck any agreement. On the Republican side the populist Tea Party movement is dead set against tax increases and even tax loophole reform where that results in net tax gains. This is making the Republicans take a much harder line than they might otherwise. On the Democrat side there is an opportunity to transfer ownership of the economy back to the Republicans if the talks fail, and Republican intransigence can credibly be blamed. The government shutdown in 1995 was an electoral disaster for Republicans and at least some of Obama's advisors may well be advising him here that his best chance of re-election may be to be seen to try hard, and fail, to reach an agreement here.

Of course a loss of confidence in the bond markets that led to a significant increase in interest rates might well eat up all of the currently proposed savings in increased interest payments but hey, it's not their money.

ES gapped down overnight. That wasn't a surprise as SPX, Dow and RUT had all broken the support trendlines that I posted on Friday morning by the end of the day. ES broke briefly below 1329.50 support and I'm thinking we might see a move down to 1315.50 support today:

NDX was the only one of the four indices that I posted on Friday morning not to break support by the end of the day. On the 15min chart this now looks like a rising wedge and the obvious target if we see the support trendline break at the open would be the open gap just under 2370: 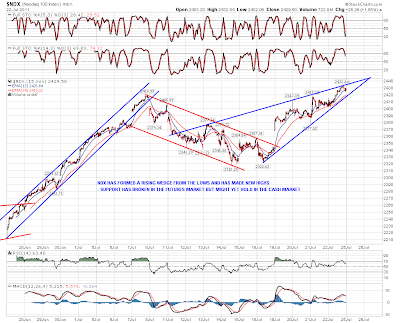 That would break NDX down through the 'neckline' of the now completed cup with handle on the 60min chart, which weakens that slightly but doesn't invalidate it: 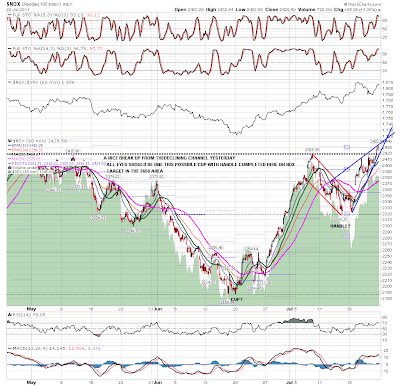 The cup with handle isn't what I'm primarily looking at on NDX though. It's an ok pattern, and there may also be an IHS forming there too. The important pattern to my eye however is the megaphone, or broadening top, that NDX has now been forming since December of last year. Another touch was needed to confirm the upper trendline and we got that at the new high on Friday. Despite the name a broadening top is a neutral pattern with a 50/50 chance of breaking up or down, and is a weak performer in reaching targets. However a break of the upper trendline should be a reliable breakout signal, and if we were to see a big reversal here, then the lower trendline would supply an ambitious downside target that should provide solid support: 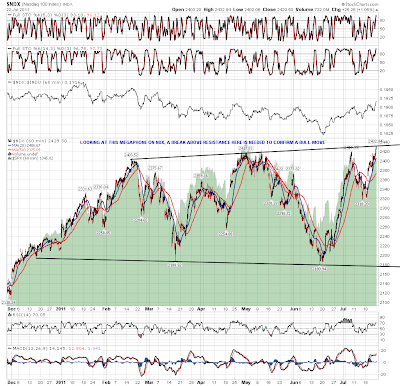 I'm leaning short today and watching this retracement carefully for signs that it may mark a significant high. If the bear case for the rest of the summer has any weight, then we reached the obvious reversal levels on Friday. A break above those would suggest that the bulls are right about a new bull wave up.