In spite of the amazing opportunities in social networking and iPad integration, United Airlines looks like a good short candidate.

Many technical analysts, including myself, work and trade in a world of trendlines, moving averages and indicators that is sufficiently divorced from the day to day world that we mostly ignore the news, on the assumption that the news will show up in the TA beforehand more often than not. Is that happening in this particularly news-dominated week? Perhaps, but if so then the TA is increasingly suggesting the news is not going to be that great.

Front and center this morning is the TF declining channel that I posted yesterday, mentioning that we could see a move into the 795 area on a break of the rising support trendline in blue. TF has bottomed overnight at 794.3,which was a perfect channel support hit. All the equity indices are looking oversold on the 60min on this move down and I'm expecting a bounce here with an upside target on TF in the 820-30 area:

ES broke the falling wedge I posted yesterday while I was writing my morning post. The target at 1309 was made and ES bounced at rising support just under there for much of the day before giving it up in the last part of the session. If we're going to see a bounce near here, I have a support level near the overnight low at 1295.5, and there's a zone with quite a bit of support running down into the 1290 area:

A key chart at the moment is obviously the EURUSD chart and I was going to post the rising wedge on that to support the case for a bounce here. Somewhat to my surprise however it has broken down from the wedge and is now testing strong support at 1.427. A break with confidence down through 1.427 could lead to a serious further slide in EURUSD in the short term and I'm watching that carefully:

Oil was trying to break resistance at 100 and that seemed likely. It turned back down yesterday and another move to test strong support at 95 looks likely. Another trader was remarking to me yesterday that failed breakouts often precede strong moves in the other direction, and that's some thing I'm bearing in mind here for oil, and indeed for NQ and EURUSD this morning, as both of those have also had breaks up that currently appear to be failing. Here's the oil chart:

Gold is looking very interesting here. You can see from my gold futures chart that it has formed a decent quality rising wedge from the low at the beginning of July. Negative divergence on RSI is suggesting that this may well break down soon and I've mentioned before that I'd expected gold to hit the daily 150 SMA (1450 area) this summer. If it does so now then we could see a very nice move down on gold after a break of this rising wedge:

The last chart for today is the Vix daily chart, where there was a close above the bollinger bands yesterday. I've left the annotations for the last Vix Buy (equities) Signal on the chart and I'll be monitoring this daily. If we see another move up on Vix then there is an unfilled gap just over 26 and I've marked that on the chart: 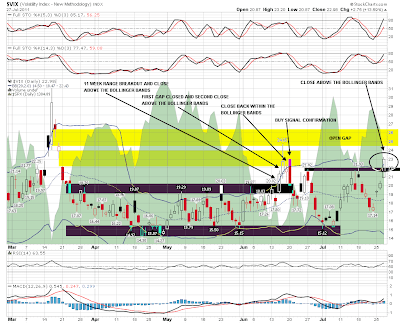 I am leaning long for a bounce here today, but that's mainly based on the TF declining channel. If that channel breaks down then we could see a serious further slide across the board. A lot of technical damage was done yesterday and I'm expecting further downside after a bounce.