Well we got the bounce I was expecting yesterday, but it wilted before it cleared 1315.5 on ES, and new lows have been made overnight. I'm very sorry to see that the TF declining channel didn't make it through the night. A sad loss, as navigating this decline just got significantly tougher. A shorter term declining channel of decent quality is still in play however:

On ES the apparent declining channel is actually a gently broadening wedge. As with the others ES is now showing very significant positive divergence on the 60min RSI:

There's a sort of falling wedge forming on NQ but the trendlines aren't strong enough to take much notice of this yet. NQ is still holding above 2350 on an hourly close basis:

EURUSD held the 1.427 area yesterday and retested broken wedge support. Overnight 1.427 has been broken on an hourly basis however and I'm expecting more downside from EURUSD:

Looking at the DX 60min chart, the likely shape of the EURUSD decline looks clearer. There's a nice looking falling wedge on DX that has broken up and retested, and a small IHS that has formed with the target at 75.60. Short term this DX chart is looking very bullish, and subject to the geopolitical rumblings this week and the GDP figures this morning, more upside for DX looks very likely today:

I posted the rising wedge on gold futures yesterday morning and that wedge has now broken down and retested. I'm expecting a reversal down for gold here, which would fit well with the move up on USD that also looks likely:

I've been looking at the 30yr treasury futures, and it is astonishing how well these have held up in a news-heavy week where the news has been a battle to avoid defaulting on US debt. ZB has been consolidating in a range since May and looking at the chart over the period, what this most resembles is a continuation IHS. I've drawn in arrows to show what I mean. IHSes often fail at the neckline of course, and this pattern may not complete or play out, but if it were to play out that would suggest more trouble ahead for equities:

The last chart for today is the daily SPX chart. This shows the progress of the possible H&S that is forming, and that SPX is currently at the bottom of the bollinger bands. Most importantly it also shows the daily 200 SMA, which held as support in June. That's in the 1285 SPX area now and that is the key support area for today if we see more downside: 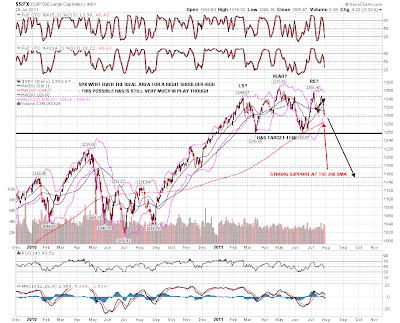 There's plenty of positive divergence on the 60min charts, but overall the setup looks bearish for equities today. I'll be watching big support in the 1285 SPX area as very key. A break down from there would look very significant.

Credit Suisse on the consequences of a default

On Thursday, Credit Suisse's global strategy team said that a U.S. default was still unlikely. However, they predicted that if the U.S. did default, stocks would suffer a 30% drop.

Hedging against a >30% correction in stocks

With that in mind, the table below shows the costs, as of Thursday's close, of hedging 5 equity index ETFs against greater-than-30% corrections over the next six months, using optimal puts.

Hedging against a >15% correction in bonds, gold, and the dollar

The table also shows the costs of hedging gold-, U.S. dollar-, and Treasury Bond-tracking ETFs against greater-than-15% declines over the same time period using optimal puts. First, a quick reminder about what optimal puts are, and a note about costs.

Optimal puts are the ones that will give you the level of protection you want at the lowest possible cost. As University of Maine finance professor Dr. Robert Strong, CFA has noted, picking the most economical puts can be a complicated task.

With Portfolio Armor (available on the web, and as an Apple iOS app), you just enter the symbol of the stock or ETF you're looking to hedge, the number of shares you own, and the maximum decline you're willing to risk (your threshold – you can enter any percentage you like, but the larger the percentage, the greater the chance there will be optimal puts available for the position). Then the app uses an algorithm developed by a finance Ph.D. to sort through and analyze all of the available puts for your position, scanning for the optimal ones.

A note about costs

To be conservative, Portfolio Armor calculates hedging costs using the ask price of the optimal puts. In many cases, you may be able to buy the puts for a lower cost (between the bid and the ask prices).

Hedging Costs as of Thursday's Close

*Based on optimal puts expiring in January, 2012