Just a quick comment-cleaner as our fearless leader is visiting the core of crime, graft and corruption today…

The SPX cloud chart looks like this as of 2pm:

That trend zone since the Devil’s Bottom low has most definitely been cracked, but we are way under the support/resistance areas of the cloud.

So the question I have is do we bounce like in the last two instances? Or mark time until the next puke, like in the previous three?  I think the answer lies in the bull/bear debate: we bounce if this is still a bull, and drop again if we have seen a bear turn.

This is a follow up video from the AAPL timing high video. If AAPL closes below last weeks low we would have a bearish engulf at price and time resistance.

The market had a wild day breaking the symmetry but it is important to know that the symmetry was what we consider to be minor meaning; since the March 09 low the pullbacks have been very shallow and today we broke out of that shallow type corrective condition.

This is the first ABC from the high so it is still labeled bullish even though it feels bearish. Yes, the pattern as it goes could turn to a bearish pattern but that is still a few legs away. We say that it is the last bullish pattern that fails is what starts a new direction so we need to find a low bounce and then fail before we can say the high is in for sure.

We are coming up to the next support so we would be aware of a big reversal day coming soon if not tomorrow.

Yesterday evening, a Sloper mentioned something to me that I didn't realize……in a video I did over three months ago, I mentioned that today – yes, today, August 5th – was the next "hit" on the time series (and, thus, a bottom). Watch the video at around the 7-minute mark. If, in retrospect, this turns out to be a bottom – – wow. Just wow.

You don't see a 99% down day very often but we saw one yesterday.SPX crashed through the very important support level in the 1220 area as though it wasn't there, and ES has traded as low as 1183.50 overnight. Wow.

We might see a bounce here. After a trend day you generally get at least a day or two of retracement. How far would that bounce go? Well a retest of the H&S necklines on SPX and RUT is starting to look like a long shot from here, and SPX might well now find that the 1220 S/R level that broke like tissue paper on the way down yesterday is now solid resistance today. I've been having a very careful look at the H&S patterns this morning and I'm happy that I have drawn the SPX H&S in the best way. That delivers a target at 1146 SPX, near the January 2010 SPX high at 1150: 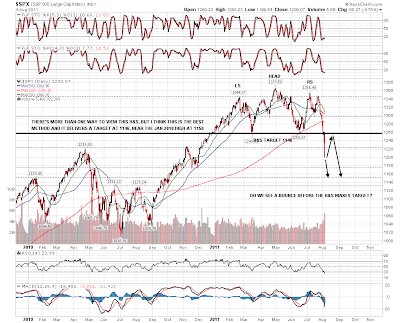 The H&S target on RUT is more ambitious, and targets the 676 area, which was the key resistance area in the summer last year. I think that target will be made, though possibly not on this swing down: 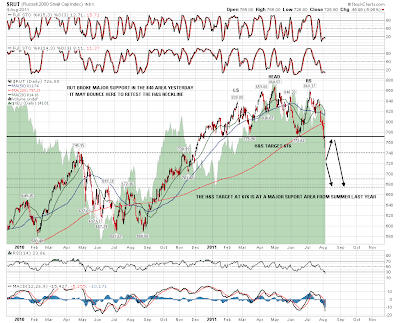 As the strongest of these three equity indices there is no H&S on NDX, but there is a broadening top that I posted earlier this week. We have almost reached target on that, which I would put in the 2176 area. NQ is trading at 2190 as I write and I am wondering whether we'll see a hit of that trendline this morning. If so there is a decent chance of a bounce there: 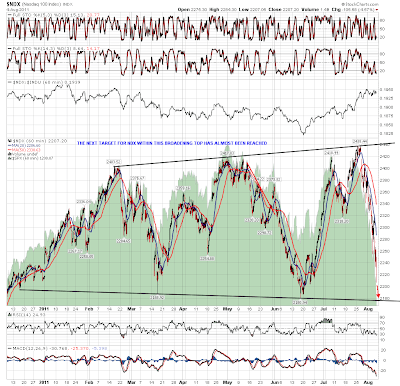 I was watching in amazement yesterday as the bullish setup failure that I wrote about yesterday morning turned into yesterday's bull massacre. Vix finally filled the second gap from March that I've been watching since then and closed a long way above the bollinger bands: 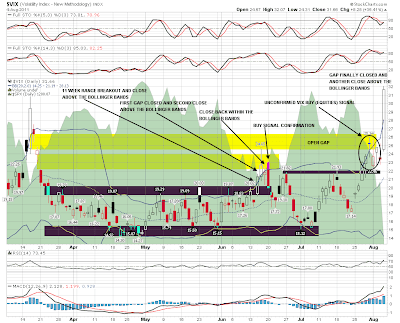 NYMO is even more oversold now and what's worth noting on the NYMO chart is that there's almost always some positive divergence at a major low. The way that would generally work in EW terms is that you'd see positive divergence on the last wave down in a sequence. If we are looking at a 3 of 3 wave, and this sure looks like one, then waves 4 and 5 still lie ahead, once this current move can find a tradeable low. Would that wave 5 low be at the H&S targets? Maybe, though we're close enough now that it's hard to rule out the wave 3 low being there: 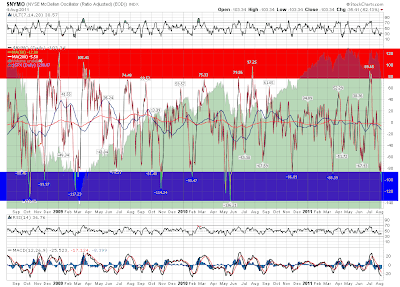 Looking at other charts this morning gold has almost reached the target I gave the other day. We've lost a lot of trendlines in recent days and this might well break too: 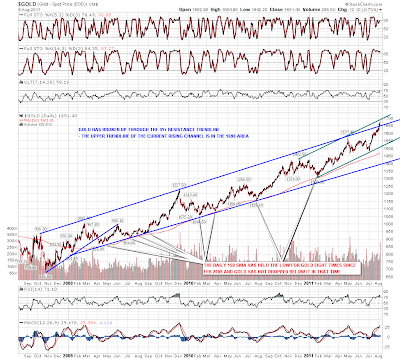 ZB has overshot the 133 IHS target I posted as a possibility last Friday when ZB was trading at 126'18. An amazing move in just a week:

The most puzzling thing this week has been the relative strength of EURUSD (and GBPUSD). The flight to safety plays this week have been gold, bonds, Yen but not USD. What gains USD has made have also been disproportionately due to the hammering that commodity currencies have taken. Whatever else, this is an interesting new development. I have a decent declining channel on EURUSD that is holding. Not perfect but reasonably good and it looks as though EURUSD should bounce a bit here today:

My feeling is that we should see a bit of retracement today. immediate resistance on ES is at 1201 and stronger resistance is in the 1215 area.