If you showed skilled chartists the graph below without the symbol and asked their opinion, I imagine the vast majority of them would be hopping-up-and-down bullish. It has a beautiful saucer formation, a clean break, a surge on gigantic volume, and a very clean pullback to an attractive entry price.

Of course, you know as well as I do that the chart in question is the triple-bearish-on-financials FAZ, loved by FAZholes the world over. I'm not saying it's a buy……..but it sure is an interesting chart.

We're due some retracement in this equities rally and it looks like we'll get that today. This is a buyable dip in my view and I'll be looking for a likely low to go long. We're in an in-between area on SPX where I'd be surprised to see a high, and so I think we'll extend higher after this pullback. Cobra did an interesting post last night arguing for retracement and then a higher high on the basis on the NYADV 5 SMA, and that fits with my view. You can see that here. My view on the support / resistance zones on SPX can be seen on the daily chart, and you can see on there that SPX is in an in-between zone where we've traditionally not seen any highs or lows: 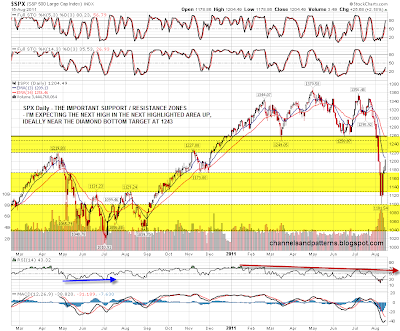 A key retracement target on SPX today would be the top of the last S/R zone around 1173, and that was also the top of the range on Monday to Thursday last week. That would fit with the hourly 200 SMA on ES in the 1170 area, though I've also added potential ES support at 1178.50 and mentioned that 1178.5 is also an H&S neckline. If we see a right shoulder form after a bounce near 1178.5, then the pattern target would be in the 1155 area:

On NQ the obvious retracement target today would be rising support from the low in the 2162 area:

On TF there's a strong support zone in the 698 – 704 area and that might well hold. It's worth mentioning that as with ES there is a potential H&S neckline at 698. If the 698 area is lost then rising support is in the 678 area, but that looks overambitious:

Oil is bouncing nicely within the broadening descending wedge that I've been posting. If it makes the upper trendline then it should hit somewhere between 95 and 96.5:

I'm slightly concerned about copper here, as it hasn't made much progress towards my retracement target at 422, and has fallen back below 400 at the moment. One thing that's worth noting is that copper futures are still holding the rising support trendline from December 2008. That is a very significant positive divergence from equities, and I'm watching to see whether that trendline will hold or fold as we see where this overall bear move on equities goes. In the meantime I have double support on HG at 388 and it is an attractive short term long as long as that support (and this equities rally) holds:

It's opex week this week, which is generally bullish. Max pain on SPY is at 128 which is also bullish, and for a number of other reasons I don't think this equities rally is out of steam yet. My WAG is that we retrace and close down today, and then rally for most of the rest of the week. As longs are counter-trend here now, buying this dip needs to be done with some caution, and any surprises are likely to be to the downside.

We like ABX and GDX both for calls. It is basically the same trade so we would pick which one you like the best. GDX target is $67 on the current leg and ABX target would be $57. There are higher targets but these would be the levels we would look to scale out of the calls.

We had a buy signal last Thursday on both of these stocks but since then they are not up much so they are still valid here.

Short GLD and buy GDX would be a good trade here.