I've had a Twitter account for a while, and I've got about 4,900 subscribers (if you're not one – sign up!) Maybe I'm just getting old, but I seriously don't understand Twitter culture. Why, for instance, Ashton Kutcher has a gazillion followers. Or Charlie Sheen, for that matter.

END_OF_DOCUMENT_TOKEN_TO_BE_REPLACED

Looking at this sequence of the USO chart shows us some tradeable information.  First off the weekly is showing us a huge range, and within it, a smaller secondary range.  The two daily charts show, one a successful test of the secondary range last week, and zooming closer in we see a series of higher lows on price and stochastics, and a nice gap just above price.

My play is this, I opened a 25 option Sept 33 call position on the open on Friday, plan is to sell or scale out on the gap fill.  Then I will watch for a successful move above the next fib line or a failure of the range low for my next move with USO.

Market Sniper pointed out a trader post on playing ranges yesterday, and looking back at the weekly you can see a failure of the smaller range gives a high probability of a test to the 09 lows.

One mistake in my chart, the smaller range is the 10 lows, not the 09 lows, sorry. 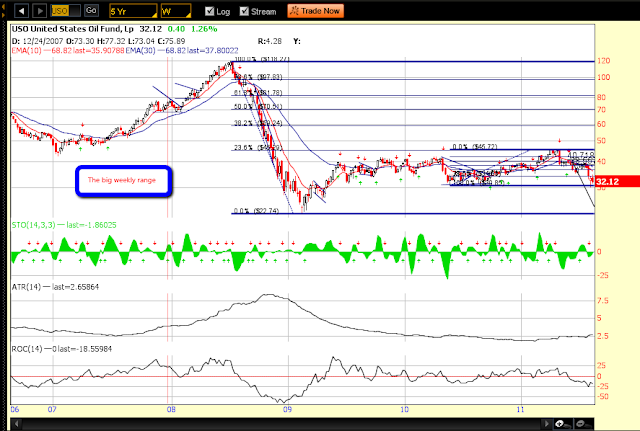 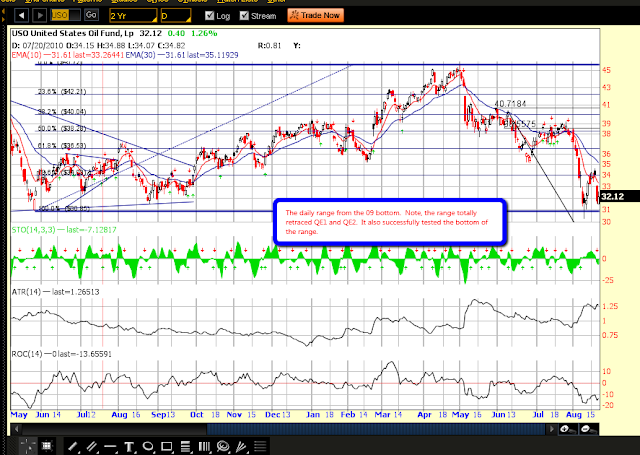 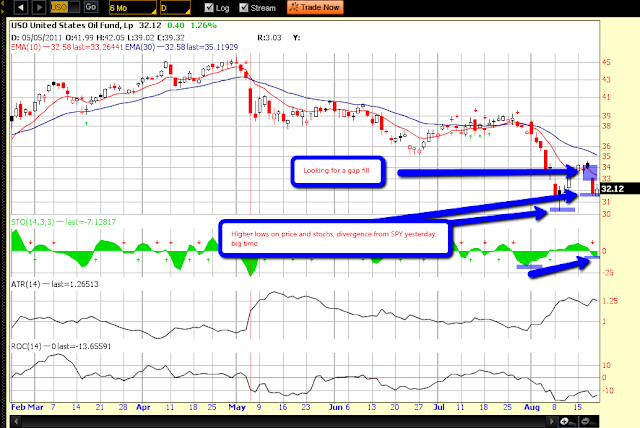 FWIW, here is my take on the current Gold market:

Had you visited SOH for only a mere 10 minutes, you would most likely be very well acquainted, and perhaps even indoctrinated in the compelling reasons and merit of owning Gold.  If you still don't get it, you can always ask our in house Gold guru, the illustrious "Dutch" (aka Market Sniper), he will be more than happy to fill you in, and bring you up to speed.  If you don't want to bother Dutch, listed below are Eric Sprout's 17 reasons to own Gold:

1)    Gold is returning to its historic role as money

2)    The inevitability of a collapse in the USD

6)    Investment demand for Gold is accelerating, but we are only in the early stages of this phenomenon

8)    Mine supply is not anticipated to rise for years, if at all

9)    Central Banks are reaching an inflection point, where they will no longer be able to supress Gold

13)   Increasing recognition that Gold prices have been seriously suppressed

14)   The supression is evident in the continued undervaluation of gold

15)    The relative small size of the Gold market

16)    Gold is in an established powerful bull market

For more detail on the 17 points see: http://www.sprott.com/docs/Reports/reasons_to_own_gold.pdf

I for one, do find the above 17 reasons to own & hold Gold most compelling.  I would also include several additional alarming reasons; The current fear of yet another stock market melt down within the span of less than 40 months, The lack of political leadership in DC, The imploding European debt crisis, The ongoing instability of the Arab spring.

So why the title & picture associated with this article?

Well, I would definitely agree that we are in a Gold bull market for the ages, however even the most powerful long term upward sloping trends can and usually do have significant corrections along the way.  I do believe we are about to enter the danger zone.

The following data shows the largest Gold corrections in the past five years:

This chart shows the extent of which Gold is currently over bought on a purely technical basis:

It is hard not to notice the parabolic nature of the move during the past few weeks.  On a technical basis, Gold has broken way out of a 3 year bull channel, and is now miles away from its 200 DMA.  According to Adam Hamilton, "once gold rallies so far so fast that it stretches 25%+ above its 200dma, it is unsustainably overbought and an imminent correction is due.  This last happened back in early-December 2009, when gold had “only” surged 15.1% in 30 trading days to hit 1.248x relative.  What happened right after this surge to very-overbought levels?  Gold immediately corrected, falling 12.6% over the subsequent 9 weeks into early-February 2010."

Overbought simply means a price has rallied too far too fast.  It has nothing at all to do with absolute levels.  Gold at $1800 might be perfectly reasonable given its global fundamentals, and its price will probably be considerably higher by the end of this year.  But over the short term, in the coming weeks or couple months, gold will likely face some serious selling pressure after such a super-fast advance.  These post-spike sell-offs are purely psychological and are totally unrelated to fundamentals.

What will be the catalyst to kick off the long overdue sharp correction?  Well, one of the following might light the fuse; A sustained rally off of the oversold lows in the stock market, The initiation of a credible effort to restructure the U.S. budget, An announced attempt at a real resolution to the Euro debt crisis, The Bernanke says no to QE3, The imminent departure of Daffy Duck from Tripoli.

And finally, the piece de resistance, Evil Plan 5.0.  An all out effort will be undertaken by the PTB to suppress Gold.  A series of CME margin hikes will be implemented, combined with simultaneous black pool selling from their TBTF banking agents.  All done in order to reinforce the evil notion that Gold is not a store of value, but just simply another very speculative, highly volatile commodity………….heheheheheh

Disclosure:  My views may be completely biased, as of last Friday, I am the proud owner of 200 GLD September puts at 160 strike.

There are three words that summarize my disposition to the market over the next week or two: Come To Butthead.

The chart below sums it up. I am banking on another brief dip down (breaking recent lows), a Jackson HOLE-inspired rally, and then – – all holy hell breaks lose.