This is a GORGEOUS BREAKOUT, and on top of that, we know that Shalom Bernanke will support the trade all the way to infinity. Finally, a long I can love long time!

With ES testing 1200 at the time of writing we are seeing the first significant pullback since the low last Friday, and looking at a number of charts here this might be a turning point of real significance. On SPX we now have a perfect rising channel from the August lows, which would make a break in either direction more significant, but also delivers a potential downside target in the 1140 area, which would retrace almost all of the gains since the low last Friday. I have some potential support at a broken declining resistance trendline in the 1190 area: 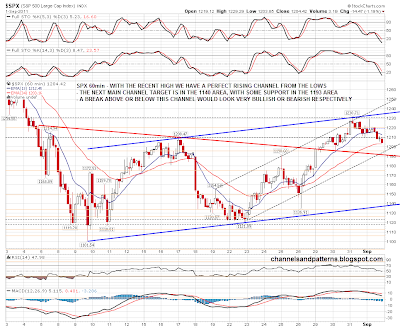 There are two charts in particular which are suggesting that we might see a very significant retracement here, and the first (weaker) chart is on EURUSD, where a sloppy triangle has formed in recent weeks. The upper trendline of the triangle is choppy, but the rising support trendline is solid, and the support break has me looking for a test of the main rising support trendline from the 2010 low at just under 1.40. The correlation with equities hasn't been very strong in recent weeks, but for what it's worth that would look bearish for equities:

The more interesting thing to watch however is the perfect rectangle that has formed on the ZB (30yr treaury futures) 60min chart. Under the circumstances this would be a rectangle bottom, with a 55% chance of breaking down, but these patterns are very high probability performers on a break up, and there would then be an 85% probability of making the rectangle target at 141'20, which would be a new high, and that would be very bearish for equities. ZB is testing rectangle resistance at the moment, and if ZB breaks up tomorrow, then I would expect SPX to break likely support in the 1190 area.  If ZB retreats towards the bottom of the rectangle tomorrow however, then support in the 1190 area will most likely hold, and we might well then see another test of the upper trendline on the main SPX rising channel:

The other chart I'll be watching is the NDX chart, though the targets don't fit well with the SPX chart unless NDX falls far harder than SPX, which hasn't been the case so far. On NDX I'm looking at the open gap from Monday's gap up, and below that what should be strong support at broken declining resistance in the 2145 area. Any lower than that would suggest another test of the lows: 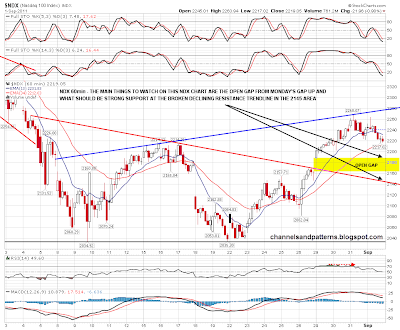 I'm leaning bearish here, but I'll be watching the ZB chart for confirmation. A break towards new highs on bonds here would look very bearish for equities.