The very nice declining channel on the SPX daily was pinocchioed on Wednesday and broke yesterday, opening up the possibility that we may rally further. The obvious targets if we see that would be the daily 50 and 100 SMAs in the 1230 and 1260 (by the time we get there) areas. If we see that my WAG would be that we would retrace from near here to the 1170-80 area before a move up. The stats for Fridays and even more so Mondays are bearish lately so I'd expect that retracement by the close on Monday. There is an RSI retracement target too and I've marked that on the chart: 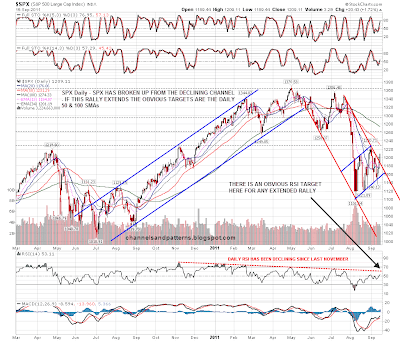 Are we going to see that extended rally? Hard to say but I'm not seeing anything strongly suggesting a top on equities here. Looking at EURUSD I'm seeing a possible kiss of death retracement completion yesterday that would be bearish for EURUSD and equities:

On 30 year treasuries (ZB) I've been watching the current rectangle and that has been testing support hard. If support holds then the next obvious target is back to the rectangle top, which would be bearish for equities. If support breaks then I'd expect a deeper retracement on ZB and have marked in a possible target. A break down on ZB would be bullish for equities:

Last chart for today is something I was playing around with this morning, which is a 2 std dev bollinger band based around the weekly 65 SMA. A very nice long term indicator and my friend chewtonic suggested it might be improved further by increasing the 2 std dev band to 2.618 which works very nicely as well, with clearer top and bottom signals in bull and bear markets. The chart helps illustrate the importance of the resistance levels we are reaching again now: 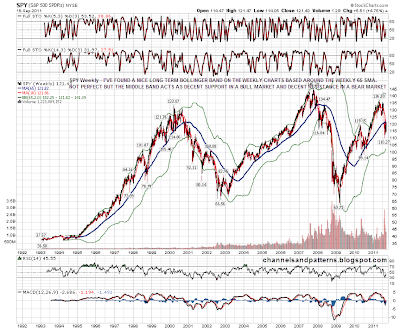 It's opex Friday today so we may not see much action either way. The Gap Guy's tip for the day is that opening gaps in either direction wil most likely be filled. I should be back from holiday and posting again daily as normal from Tuesday next week. Everyone have a great weekend. 🙂