Well I'm back from holiday now and my normal posting schedule will resume, though I was busy with post-return stuff this morning so today's post is late. That's not altogether a bad thing as I'd like to have a wide-angle look at the markets today to see what looks important across the various markets I follow. I do have one shorter term thing to mention though and that is that the ES low yesterday established a rising channel from the low last week. Until that breaks down there is a real risk that ES may move up sharply to the upper channel trendline, currently in the 1236 area:

Looking across the various related markets the general picture is coming over as pretty bearish. Copper has now broken rising (broadening wedge) support from 2008 with confidence on the daily chart and next decent support is at 365. Once that breaks, as seems likely, a test of 305 support is on the cards. A break up of this kind on copper would have been seeing as very bullish for equities. It's therefore hard to see how this major break down can be anything other than bearish for equities over the next few months:

EURUSD also looks bearish on the daily chart. Rising (channel) support from the 2010 low broke and was retested last week. I'm expecting a break of the last low at 1.35 too long and further declines after that:

The oil futures daily chart also looks bearish here The rising wedge that I posted a couple of times as it was forming has now broken down and the wedge target is at the August lows at strong 77.4 support (Dec futures). I'd be happier about that playing out soon though if CL has hit declining support from the high and it could be that we will see oil trade sideways for a few days until that is hit:

30 year treasury futures are more mixed here, but there are two rapidly closing trendlines that should deliver the next big move. The first is strong resistance at 142 which has been tested three times and could be a triple top. The second is rising support taken from the July high that is now in the 139'13 area. Rising support will meeting current resistance at the end of September so we will see a break up on down before then:

My last chart today is the AAPL monthly chart, which I've been posting on various timescales for the last eighteen months. I was wondering before the summer top whether AAPL hitting my upside target could mark the bull market top, but I think we've seen that already, though neither SPX or NDX has yet reached the technical bear market confirmation level of a 20 fall from the highs. I am now thinking that AAPL hitting target in the 430 area may signal the NDX high for the current move up and am watching with interest to see when that is hit: 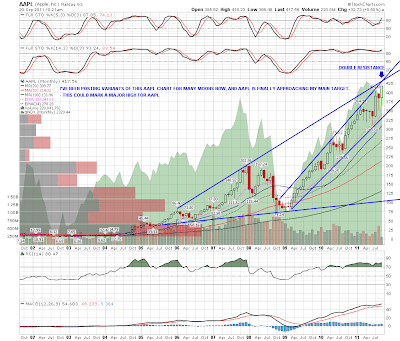 I don't think we've seen a really major low on equities yet and after the current move up ends I think we may see new lows on SPX shortly afterwards. I'll be watching for a break of the rising channel on ES from the last low to signal that the current move is ending. Over the next few days we have a lot of things that could move the market a long way in either direction, with FOMC tomorrow, and seemingly almost daily crises and interventions in the Euro area as Greece and other PIIGS slide towards default. What I'm not expecting to see is an announcement of QE3, as rising inflation in the US would seem to rule that out, though we might see a smaller scale operation announced by the Fed this week that could lift the markets for a few more days.

(You can download the ENTIRE stock model for this week for free at FocalEquity.com.  Note:  Includes top 50 longs and top 50 shorts).

Momenta Pharmaceuticals, Inc. (NASDAQ: MNTA): This stock plunged over 20% on Monday. Our stock ranking model ranks this stock as 2,347 out of 3,514 after the data update as of 9/16/2011, towards the bottom of the stock universe. Such ranking would be very accurate for this stock after Monday’s action.

Range Resources Corp. (NYSE: RRC): RRC had a huge intraday move today. It ranks poorly in our model despite the upswing and the overall uptrend YTD. Current ranking is 3,264 out of 3,514.  RRC is a short based on the stock ranking model.