Today's post will have to be short as I'm going out soon and will be out for most of the day. I have to be out most of Monday morning as well so Monday's post may also be short.

Obviously the symmetrical triangle broke downwards yesterday and broke down hard enough that I think it is unlikely to be a false break. This is disappointing from a probabilities perspective, mainly as these triangles are poor performers on downwards breakouts, with only a 48% chance of reaching the target in a break down. That statistic is in a bull market and Bulkowski hasn't even given a statistic for these in a bear market as they don't qualify as a high probability pattern in either direction in a bear market. You can see Bulkowski's page on these here.

Nonetheless a lot of technical damage was done yesterday and I'm expecting to see more downside. The triangle target, for what it's worth, is 1155 on ES, and I'm looking for at least a test of main ES support at 1185.

ES ended the day in a consolidation range yesterday and has broken up from that range overnight. In doing so ES broke the tight declining channel for the decline from the high on Wednesday and I have two potential upside targets today. The first is the test of broken triangle support in the 1227.50 area, and the second is the important support/resistance level in the 1238-40 area. On an hourly close over 1240 I would start to seriously consider the possibility that yesterday's break down was a false break:

I'm not expecting that though and one reason for that is that NQ also broke important support in the 2280 area yesterday. This should lead to more downside, and that support break has so far been retested and held overnight:

I was looking for two things to confirm a bearish breakout and I saw one of those. On 30yr Treasury futures (ZB) the consolidation range was broken to the upside, and that break is very bullish for ZB and correspondingly bearish for equities. I'm not sure whether ZB has formed a rectangle or an ascending triangle in that range and have marked both on the chart. Both however are high probability patterns that perform best on upside breakouts, and have an 80% and 75% probability of reaching that target respectively. The targets for both are in the 146'15 area, close to the 2011 high at 147.

One caveat here however. Broken resistance held as support initially overnight, but ZB has since broken back within the rectange/triangle. I have a shorter term support trendline at 142 and that needs to hold today or the break up will be in doubt. Marginal new highs or lows on RSI divergence can break back the other way hard if not followed through quickly, as we saw at the October low on SPX: 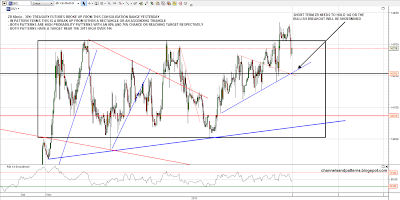 The other thing I was looking for as confirmation on a bear breakout yesterday was a new low on EURUSD, and that was something we didn't see. This is a concern, as EURUSD is either building a bear flag here, or making a short term double-bottom. If EURUSD is reversing then bears will be swimming against the tide, and it will be hard to make much downside headway. I'm expecting this to be a bear flag, and if so then we should see new lows on EURUSD soon. If we see a break up with conviction through 1.356 however, then a double bottom will be more likely, with a target in the 1.37 area and declining resistance slightly above that level: 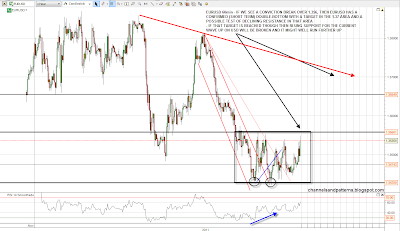 I'll also be watching the DX chart on any EURUSD move up as rising support for this wave up is now at 77.80, and that trendline needs to hold, as if it doesn't the current wave up on USD may have finished. That would be a bad signal for equity bears here: 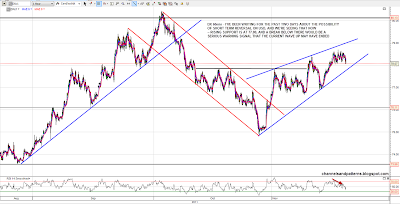 https://slopeofhope.com/2011/11/many-triangles-break-down-by-springheel-jack.html
Many Triangles Break Down (by Springheel Jack)