ES held the 1260 area that I was seeing as major support yesterday morning, and is close to testing the 1280 high from the opening candle this week. If ES gets over there the real test is at the October high at 1283.50. We'll see whether that can be broken with conviction. If so that would look very bullish. A failure at or near the October high is potentially very bearish, as it sets up a double-top that would indicate to new bear market lows. I'm not wild about the trendline setup on ES at the moment, but there is a rising channel that I've marked on the chart;

I've marked up the trendlines on the 60min SPX chart as well. It's worth mentioning here that we currently have negative divergence on both the 60min RSI and the daily NYMO, which suggests a possible short term high in this area. The key SPX pivots here are the 1261 and 1292 pivots. the 1292 pivot is at the test of the October highs and is the next major resistance level. A break below 1261 SPX would strongly suggest that the short term high is in: 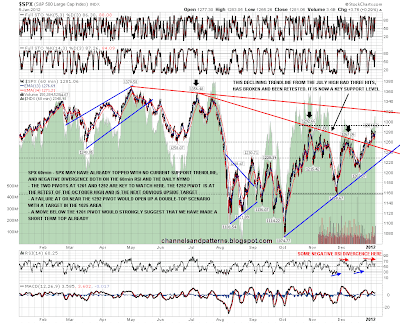 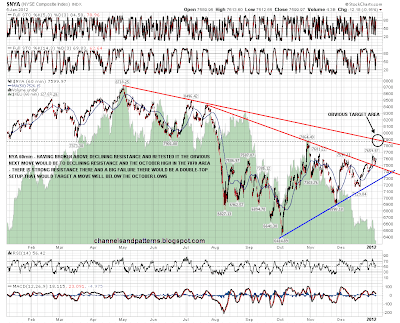 EURUSD broke strong support at 1.285 and the path is open to trendline support just over 1.26. There's a better trendline setup on the DX 60min chart however, as DX has formed a very nice rising wedge that I've posted before. DX is stalling at the last high at the moment but on a break up I have wedge resistance currently in the 81.8 area and wedge support in the 80.1 area: 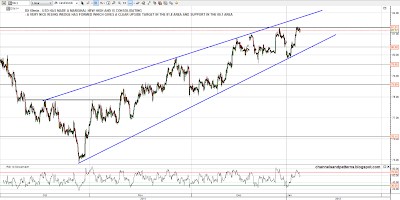 There's another very nice rising wedge on CL from the last swing low. On the daily chart there is a potential double-top at 1the last highs that I'll be posting if CL breaks wedge support: 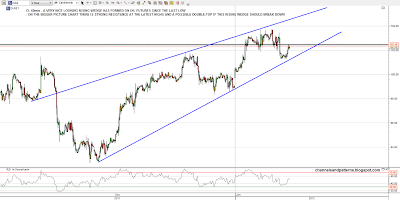 We're obviously at big resistance levels on SPX and oil as I've mentioned, but it's the setup on bonds that may be the key to what happens next. At the moment TLT has made what looks like a very nice double-top at 124 resistance and has since broken the rising support trendline from July. This is a very beearish setup unless TLT can break over 124 with conviction, and if bonds break down hard here, it's hard to see that happening outside the context of a big move up in equities. I'm leaning towards a continuation of the bear market here for many reasons, but this is a big warning sign that the bear market may be over. One to watch: 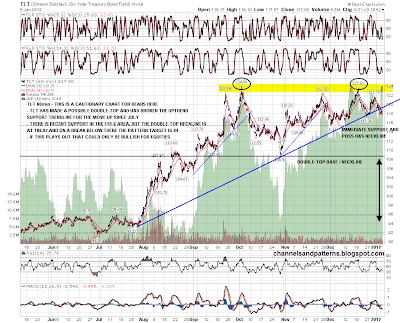 Obviously the key trigger for today is likely to be the employment numbers. On a break up over 1280, which I'm now watching as I write this, key resistance is in the 1292 SPX area at the October highs. There's big resistance there and I'll be watching that for any signs of an interim top.

The jobs report just came out at the high end of consensus, and ES shot higher along with NQ while the Euro and treasuries dropped.

The Euro remains my "Rip Van Winkle" trade – – if I had to place and short and not touch it for months, this would be it.