I recently saw this posted by a friend; as an avid student of U.S. History myself, it had particular interest for me:

In 1825, the year before his death, Thomas Jefferson — the 3rd U.S. President and a Founding Father of the United States of America — was asked by a father to supply some words of wisdom to his young son, Thomas Jefferson Smith, who had recently been named after him. Jefferson graciously responded with a handwritten letter, at the end of which was the following 10-point list of advice for the youngster, titled, "A Decalogue of Canons for observation in practical life."

A Decalogue of Canons for observation in practical life.

1. Never put off till tomorrow what you can do to-day.
2. Never trouble another for what you can do yourself.
3. Never spend your money before you have it.
4. Never buy what you do not want, because it is cheap; it will be dear to you.
5. Pride costs us more than hunger, thirst and cold.
6. We never repent of having eaten too little.
7. Nothing is troublesome that we do willingly.
8. How much pain have cost us the evils which have never happened.
9. Take things always by their smooth handle.
10. When angry, count ten, before you speak; if very angry, an hundred.

The short term rising channel on SPX and ES broke down with conviction on Friday morning but after the early low we saw the usual reversal and grind up for the rest of the day. Overnight ES has made a new high so the short term topping setup has been negated. I've been mentioning every couple of days that declining resistance from the 2011 high is in the 1315-20 area, and that for me is the obvious upside target here. I've marked the key resistance and support trendlines on the SPX 60min chart. A break above declining resistance from the 2011 high would need to be confirmed with a break above declining resistance from the 2007 high through the 2011 high, and that's a few points higher. If we see that then I'll be using a new bull market as my primary scenario. A break below rising support from the October low, currently in the 1235-40 area, would most likely confirm that we are still in a bear market: 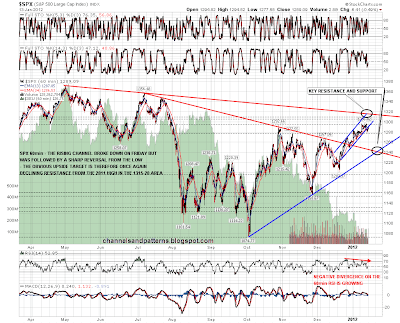 There are a number of key bear market indicators that I watch and post, and the last really big one is worth having a look at today. That indicator is the crosses of the 13 & 34 weekly EMAs on SPX. It's worth noting that during the last two bear markets the two EMAs did not touch again until the bear market had ended, so it's cautiously bullish that they are now crossing again. If we see a cross with conviction then it will be likely that we are looking at a new bull market and I wouldn't expect another cross with conviction until after the start of the next bear market: 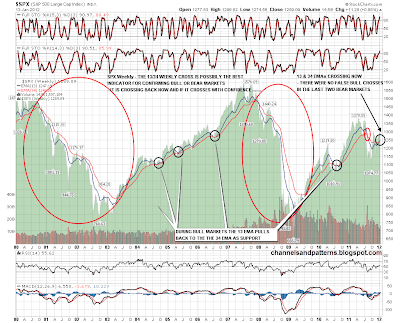 Does this mean that I think we are in a new bull market? No, but it is a possibility that is growing stronger as SPX trends higher despite the negative divergences from what would normally be leading that bull market. Oner of those is copper and while it is still strongly negatively divergent against SPX it has broken up from the triangle of the last few weeks. It is testing the triangle top now (October high), the next resistance above is at the 2011 double-top base in the 390 area and I make the triangle target in the 425 area: 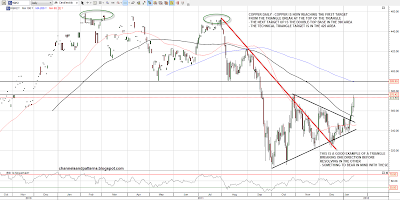 Looking at the Vix the first resistance at the middle bollinger bands on the daily chart was hit on Friday. That's an obvious area from which to see another swing down: 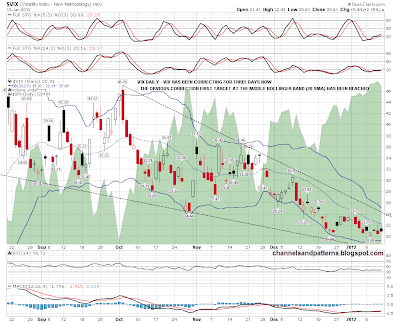 We are reaching a key resistance area on NDX as well and I've marked that up on the daily chart. The 2403-38 area has had four hits in the last year and each marked a swing high followed by a reversal at least 9%. This is the obvious area to look for a big reversal on NDX this time as well. It's worth noting that NDX has not yet reached the October high, and so has been lagging both SPX and RUT since then: 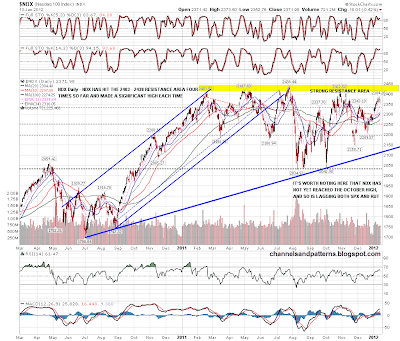 On NQ I posted a possible channel that might form a few days ago and Friday's low confirmed the lower trendline. This is a key channel to watch now, though it is a little rough. Unlike on SPX or ES however it gives us a valid support trendline from the last low, which is a stronger trendline setup:

We are coming into both a decent time area for a big reversal and natural resistance areas for a swing high. It's natural to feel that the trend will continue after any significant move but it's worth remembering that we are still in an area where which is consistent with an ongoing bear market. Just to illustrate that point I'll include here an email I sent on 25th November, near the 1158 low then, saying that I was expecting a reversal up that might last in fits and starts until mid to late January. We're in that time area now and there has not yet been a break of declining resistance from the 2011 highs. We've had some positive economic data since then but the scenario that I was outlining afterwards for 2012 is still perfectly valid. This is not an area to fall in love with the bull side as yet:

Short term I'm expecting a partial gap fill towards rising support from Friday's low, and that's in the 1295 area. Any lower and the gap from Friday's close may fill.

Excerpted from the January 15 edition of Notes From the Rabbit Hole, NFTRH170

From Bloomberg on Friday [13th]: “Stocks fell, trimming a weekly gain, while the euro and commodities slid after reports that several European nations will have credit ratings cut by Standard & Poor’s. U.S. Treasuries rose…”

This is the news of one failing major currency benefiting the exchange rate of another, along with the Treasury bonds it denominates. Deflation is not global hot money hysterically running from one intrinsically worthless currency to another any more than the 2005-2008 “death of the US dollar cult” represented hyperinflation.