The rising support trendline for the current move up on SPX broke and retested yesterday, and the setup for a retracement here looks very promising. That retracement should stay above 1267 SPX unless we see a major bearish break. The rising wedge target is 1277 SPX and an IHS may be forming with a target in the 1296 SPX area. ES has broken strong support at 1305 overnight which is also encouraging: 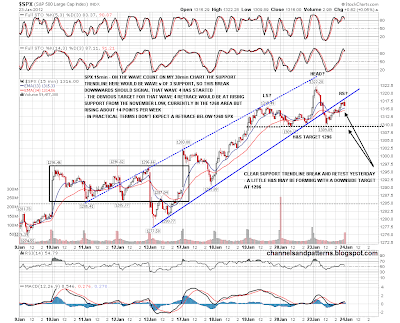 I have a nice looking rising channel on NDX as well with channel support in the 2400 area. That's worth keeping an eye on as the next obvious trendline support is a long way below: 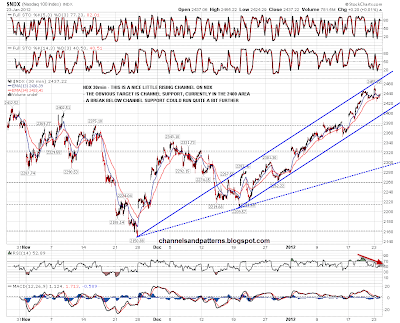 The moment of truth for gold is here, with it starting to test the double resistance at declining resistance and the broken 150 DMA yesterday. A break above would look very bullish but a failure here obviously just the opposite. Until that resistance breaks this is a short entry level of course: 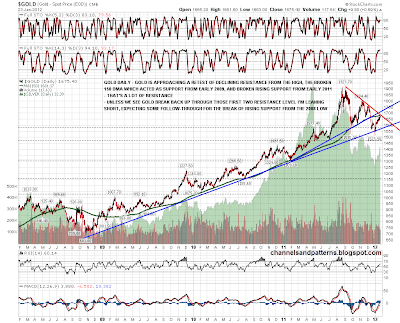 Given the geopolitical situation on oil, I should be seeing some bull setups on CL (March) here, but I'm not. There is double resistance overhead at broken support and declining resistance, and this chart would at least look less bearish if that is broken. Until that happens however I'm seeing an H&S target at 92.5 and if CL gets below the double-top neckline at 92.9, the double-top target is 81.8. Both targets look ambitious given the current situation with Iran, but unless we see a break up through double resistance not far above, CL has a very nice topping setup here with targets a long way below current levels. From a technical perspective the decent risk/reward swing setup is still short: 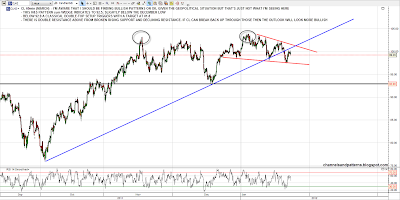 EURUSD has so far fallen 18 pips short of the 1.308 target I gave yesterday, but has reversed at a possible alternate sloping neckline for the IHS that I think maybe forming here. Ideally it would now retrace into the 1.285 area to form the right shoulder, and if it were to play out then the IHS target would be in the 1.35 area. Negative divergence on the 60min RSI looks promising for retracement here:

On the bigger picture for USD, a significant bounce for EURUSD should set up the right shoulder on a possible much larger IHS on USD that would target the 90.5 area. There is a question in my mind as to whether the battered Euro can manage a strong bounce here, but a retrace on USD into rising support in the 77 area would set up a very nice USD long play. As ever time will tell: 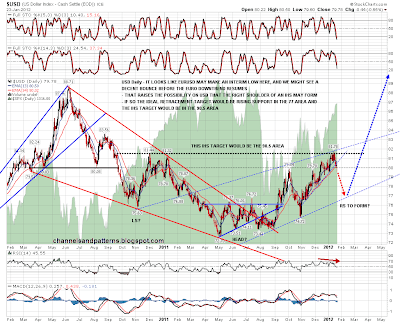 ZB hasn't made my downside target at 139'25 or declining support in the 140'10 area, but is nonetheless showing signs that it may be making a short term low here. I'm watching the steep declining resistance trendline for a break up. RSI also looks promising: 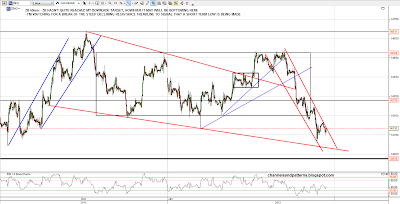 I'm leaning short today, but we might yet see a bounce from the overnight lows and the gap fill looks possible unless SPX gaps below 1309, in which case it will seem less likely. Retracements have been disappointingly shallow lately, but I'm ideally looking for the SPX rising wedge target at 1277 as my downside target in a retracement that should last two to four days. After that I'll be looking for a move up to higher highs unless we see a breach of 1267 SPX, which would cast my current view on SPX into doubt.

I'd love to call a major interim top here but I'm not seeing that as likely yet. There are a couple of charts that would support that though, and I'll certainly be watching my line in the sand at 1267 SPX in case of a break below. The first bearish chart that I haven't posted today is my 6yr SPX chart that shows a perfect test of declining resistance from the 2007 top at the high yesterday. The second chart is the Vix chart, which triggered a Vix Sell (equities) Signal with the close back within the daily BBs yesterday. A higher Vix close today would confirm that signal and that would promising for a high here, though the track record of these signals is somewhat mixed. We shall see.