I was asked the other day what I thought about the markets and the tear they seem to be on once again. All I could do was shrug. The person then followed with “But you had so much to say before?” of course the person was trying to goad me but hey, it comes with the territory.

As many of you know I have written many articles on why I believed the markets are not acting in ways one would presume. I wrote many times why I felt as I did and gave the reasons why. They’re all in the archives, and unlike most, I haven’t run away from what I’ve said or wrote. However, with all that said, as of right now my warnings could be looked as wrong. The market continues to climb higher by the day. Not only higher but within spitting distance for many indexes to have erased 2008 as if it never happened. No one could be happier at being wrong than yours truly. But saying I’m wrong doesn’t mean I was not “right” in my reasoning or my conclusions to the perils or pitfalls possible. (and are still very present)

END_OF_DOCUMENT_TOKEN_TO_BE_REPLACED

One of the phenomena that behavioral economists and psychologists have identified as being part of our decision making process is happening now. The perils of complexity refers to the phenomena where the more complex a decision the more we fall back on simplistic solutions.

In the case of Greece, the number of variables, parties involved and lack of precedents has resulted in the market saying in effect " This is too hard to figure out so I'm just going to wait until it is easier to quantify, then I'll re-price the risk"

Meanwhile Germany is exhibiting the classic signs of an employer who really wants an employee to quit, but doesn't want to pay severance.  Over the last few weeks Germany has progressively increased the cost to Greece of staying in the EU by introducing tougher conditionality for any release of funds. Germany wants Greece to leave so that it can redeploy the funds where it is less likely to be a money sinkhole. But they want the process to be sufficiently drawn out that the market has time to adjust. In this regard they are mostly succeeding. We now have Dutch EU Commissioners openly talking about Greece leaving the EU and the market doesn't even blink.

However the market has not priced in the risk because it is too complex. If Greece leaves, as I now think they will, there will be a re-pricing of risk. It will not be a Lehman event, but it should be the catalyst for at least a modest (2-5 %) correction.

Below are a series of percentage comparison graphs of a number of markets. They compare money flow between the first week in February and so far this week.

The first graph depicts gains made for the Major Sectors during the first week in February. The Financials sector made the biggest gains that week, with no losses for any sector. 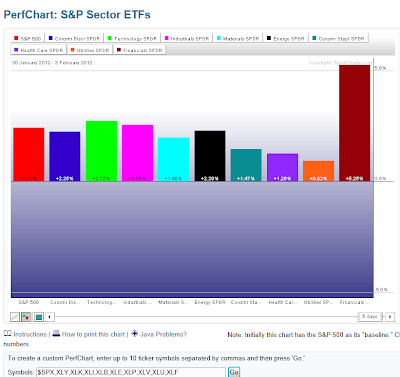 END_OF_DOCUMENT_TOKEN_TO_BE_REPLACED

I was joking on twitter yesterday morning that the short-term bearish setup I was looking at looked very tempting, even if people were having to climb over piles of bearskin rugs to get to the screens to see it. Needless to say there was a report early in the day that the Greek are very close to finalising their no-default default, and both EURUSD and ES broke up hard to trash that bearish setup. This market remains in a strong uptrend and JBTFD is still the order of the day.

It still looks early to think about a top on EURUSD and GBPUSD at the moment. I've been posting my big picture USD chart and the obvious target is a hit above 76.72 in mid to late February. I can't see any reason to doubt at the moment that we will see that level hit, and at that point we will see if that rising channel on USD can hold:

END_OF_DOCUMENT_TOKEN_TO_BE_REPLACED

As you all know I have had a bearish tone since mid-January.

The market had moved into a short-term overbought state, excessive optimism had pushed into the market and seasonality had entered a historically bearish.

And over the past several weeks all of the aforementioned have pushed further and further into a bearish state.

But, the bulls have yet to waver and the grind continues. Since December 19th the S&P 500 (SPY) has climbed over 12% without pause.